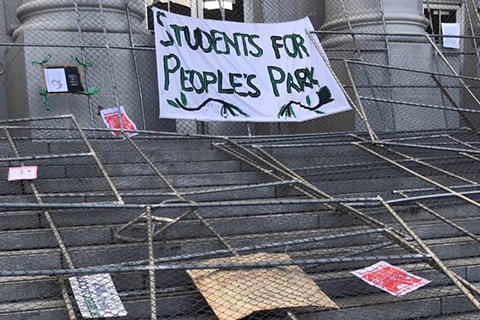 For 50 years, UC administrators have schemed to take People's Park from those who turned a dirt lot into a lush, community-focused public sanctuary. Now, UC Berkeley is on the verge of permanently destroying the park. It installed initial fencing around much of the park on January 19. On January 27, police and public works crews evicted several unhoused residents of the park. But people are beginning to resist the coming construction of a 16-story housing complex in 2022 and are calling out for greater public support. At a rally to save the park on January 29, protesters pushed down the fencing and carried much of it to Sproul Hall on UCB campus.

A park defender writes: If you have told yourself, "I'll show up when the fences come," well it's happening. The fences are starting to arrive. It's now. It's real. People's Park needs you. According to UC Berkeley, the construction at People's Park won't start until 2022. However, here and now in 2021, the pre-construction work is commencing. The UC is now slowly introducing fencing, slowly starting to nudge people away from the area, and starting to drill for the soil stability and hydrology tests....

People's Park Fenced Off by University of California Berkeley |