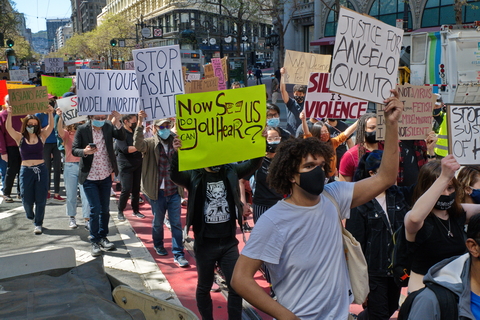 After a well-publicized series of apparent hate crimes against ethnic and racial minorities, including a mass murder of in Atlanta, Georgia, on March 16, people across the country and in California have reacted with outrage and public protest. On March 20, the Asian community and allies stood up and spoke out in San Francisco denouncing anti-Asian hate crimes. These crimes have spiked 150 percent since the pandemic began.

On March 26, over a thousand people marched from Union Square to a rally at the Embarcadero. Themed "Rise Up With Asians," the march included Black, Latino, and other allies who carried signs denouncing the continuing U.S. history of crimes against ethnic and racial minorities, particularly Asian women. Sponsored by twenty different organizations, the Embarcadero rally featured performers and fiery speeches.

In Redwood City on March 27, Corrie Peñafort and her family organized a small event to support human and equal rights, and to call for a Stop to Violence against Asian-Americans.

On April 2, over 400 youths rallied in front of Oakland's City Hall at Frank Ogawa Plaza. Led by amplified slogans from the back of a truck, they danced and marched. The march detoured through part of Chinatown, paused at the Asian Cultural Center and proceeded to rally at Lake Merritt.

Mountain View--Rising Up Against Anti-Asian Discrimination |

Spirit of Love, Show of Strength at Rally Opposing Violence Against Asians |

Rise Up Rally in San Francisco--Stop Violent Attacks on Asians |

No Hate Crimes Against AAPI Rally in San Francisco |

Solidarity Action with the AAPI Community: Unity and Respect Rally |