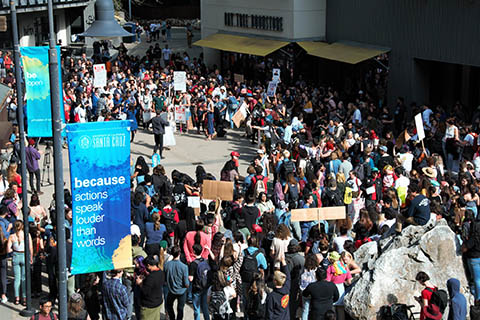 At least eighty-two graduate student teaching assistants at UC Santa Cruz withheld Fall grades in protest of low pay. As of February 28, they are out of a job next quarter. Fifty-four who had already received Spring appointments were dismissed by the university in retaliation for the strike, and the rest simply won't get hired. But the movement has declared that the fight isn't over, and "Together, we win!" More teaching assistants will withhold Winter grades, and over 542 graduate students have pledged to refuse teaching assistant positions vacated by dismissed graduates.

In response to the administrative escalation, graduate students are calling for the cancellation of classes on Monday, March 2, and for everyone to join them on the picket line for a press conference in the morning. "On Monday, we wear red for the future of higher ed. The strike continues. See you on the picket."

On February 27, UC Santa Barbara began a full teaching strike to demand their own COLA (cost of living adjustment) and in solidarity with UCSC, while UC Davis also began a grading strike. UC Irvine, UC Riverside, UC Berkeley, UCLA, UC Merced, and UC San Diego are organizing toward strikes of their own. Meanwhile, the statewide UC graduate workers union UAW 2865 has filed Unfair Labor Practice charges against the University of California, and Senator Bernie Sanders again called on Janet Napolitano and UCSC to negotiate with striking graduate students and stop union-busting.

Striking University of California-Santa Cruz grad students defy UAW, arrests and threats of termination | Joint UCSA-UCGPC Letter to UC Leadership on the Excessive Police Presence and Use of Force at the UCSC Wildcat Strike |

COLA Strikers Take Base of UCSC Campus; Arrests Made

This Is America #99: Inside The UC Santa Cruz Wildcat Strike

California graduate students on wildcat strike | Santa Cruz Faculty Association Solidarity with Graduate Students | No COLA, No Grades. We Will Not Submit