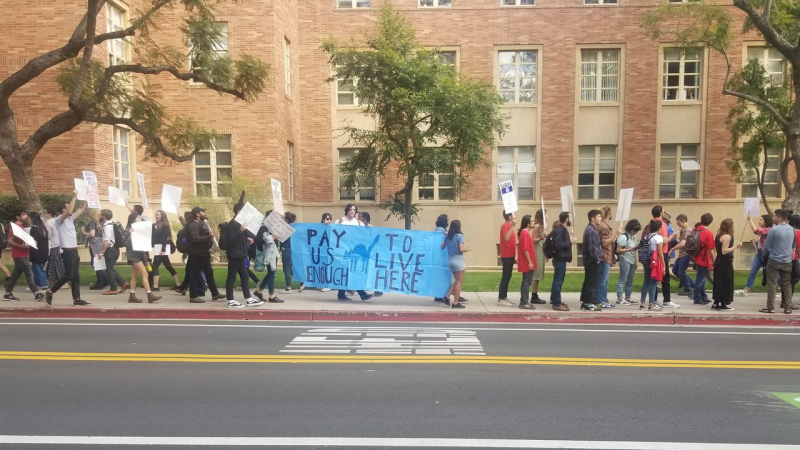 original image (1280x720)
University of California Santa Cruz (UCSC) graduate teaching assistants (TAs) continued their wildcat strike Friday, with solidarity actions spreading to nearly all of the nine other campuses in the UC system. Hundreds of graduate and undergraduate students marched throughout the state in opposition to threats by UC president and former Obama Homeland Security secretary Janet Napolitano to fire striking TA’s if they did not return to work, and against the mobilization of police against students.

200 UCSC students have been withholding Fall 2019 final grades since December, calling for a substantial cost-of-living-adjustment (COLA) of $1,412 per month to compensate for high rents and living expenses. Last week the grading strike grew into a full-blown wildcat strike, in defiance of the no-strike clause in the contract negotiated by the United Auto Workers (UAW) union last year. Demonstrators raised similar demands as UCSC TAs at their own campuses.

Friday’s demonstrations were dubbed the “Doomsday Strike” in reference to the 11:59pm deadline set by Napolitano for UCSC TAs to submit Fall semester grades or be fired. At UCSC, nearly one thousand students and faculty marched throughout campus chanting, “students and workers—one struggle, one fight!” and blockaded the two main roadways into the school, effectively forcing the administration to cancel classes for the day.

Strike action by UC students has received widespread support nationwide by students and faculty nationwide, including from New York University, Pennsylvania State University, University of Chicago and elsewhere. A GoFundMe account created to pay for striking students’ lost wages and supplies has received upwards of $95,000 from over 1,200 donors as of this writing.

The unfolding struggle is not only against the UC administration, but the Democratic Party and the United Auto Workers union, which covers the graduate students at UCSC. Eighteen of the 26 members of the UC Board of Regents are hand selected by the Governor of California, Democrat Gavin Newsom, and seven are ex-officio members, comprised of the current Governor, Lieutenant Governor, Speaker of the State Assembly, State Superintendent of Public Instruction, the president and vice president of the Alumni Associations of UC, and the president of the University of California.

Austerity has been the modus operandi of the Democratic Party, including in California. In the richest US state, home to over 150 billionaires and over 150,000 homeless, education funding has not risen to the levels before the 2008 financial crash.

The United Auto Workers, whose top leadership is embroiled in a massive bribery and corruption scandal in the auto industry, and other unions in the UC system have worked with the university administration to balkanize the student workforce, which is spread across at least 15 different unions. On top of this divide and conquer strategy, each union has “negotiated” away students’ basic right to strike. The fact that Napolitano is using the “no-strike” clause in the UAW contract as a cudgel against UCSC grad students demonstrates that the unions are not workers organizations, but agents of management.

To carry their struggle forward, graduate students should move now to break from the UAW and form rank-and-file committees, in irreconcilable opposition to the Democrats and Republicans, to expand the strike across the UC system and make the broadest possible appeal to workers and youth across the country and internationally.

“We are demanding no retaliation for the strike, to have COLA for everyone here. We want a meeting with the Graduate Dean, and we want to make sure that all students are free from police intimidation.”

Their demands are “COLA for all, everyone who is a worker,” he said. “We don’t want to exclude anyone, and following the lead of Santa Cruz, at our meetings we’ve had staff, and other local workers in the area attending.

“The UAW is in a position looking after their own interests. They’ve made it clear that they cannot legally support our strike. We’re going to go our separate ways essentially.”

Alec, a graduate student at UC Los Angeles, said that the students ultimately need to confront the profit system, which is the root cause of low wages for student workers and high tuition.

“I disagree with the notion that living conditions are the individual responsibilities of the students themselves. Education has become increasingly corporatized. In fact, from what I know, corporatization has just exploded on campuses in recent years. So, I don’t think this is an issue that can be resolved at UCSC alone or UCLA alone. It's much bigger and systematic.

“But there are still things we should look into on individual campuses. Many of us get these fees that we don’t what for—processing fees, service fees. I just saw a bill for a ‘semester fee.’ I have no idea what that is. I have no doubt there’s a tremendous amount of waste and fraud that needs to be uncovered. Just look at the college admissions scandal. That’s probably just the tip of the iceberg. There’s no transparency.

“I worry that if concessions are made to the graduate students, that they would be made to pay for it elsewhere. Maybe they would raise tuition on undergraduates, or maybe campus housing costs would rise because graduate students got their COLA and can then afford it. I think you’re right, the only way around this is to expand the struggle to other campuses and to other workers too.”

Alec offered a message of support to UCSC students. “We want to say how thankful we are for them. They are fighting against a massive police force and they need all of our support. One thing they should know, that whatever some university official tells them that they’re ‘neutral,’ there’s no such thing as ‘neutral.’ If they’re saying that, that can only mean they’re working against the students.”