Add an Event
Newswire
Calendar
Features
Home
Donate
From the Open-Publishing Calendar
From the Open-Publishing Newswire
Indybay Feature
Publish to Newswire
Add an Event
Related Categories: Santa Cruz Indymedia | Education & Student Activism | Labor & Workers | Police State & Prisons
An Interview on the Growing Wildcat Strike at UC Santa Cruz
by It's Going Down
Tuesday Feb 18th, 2020 3:54 PM
The UC seems to recognize that physically cracking down on the pickets would lead to poor news coverage and a depletion of their already expiring political capital. So instead, they’re taking a different tact and threatening our jobs. 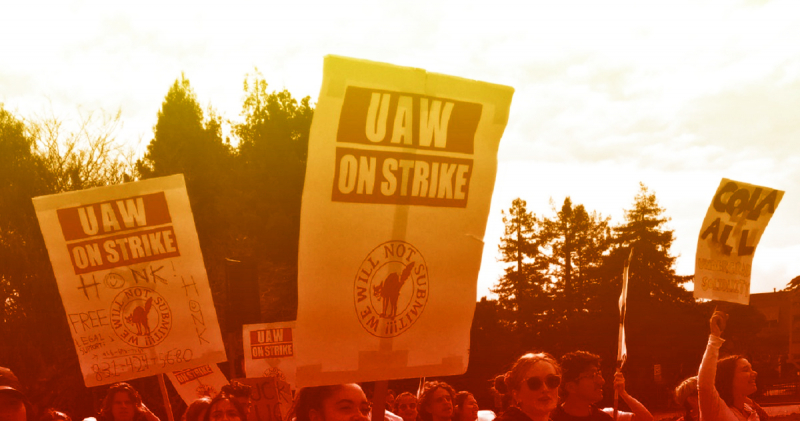 Strike While the Iron is Hot: An Interview on the Growing Wildcat Strike at UC Santa Cruz

Since the wildcat strike at the University of California in Santa Cruz kicked off last Monday, thousands of students have blocked streets and shut down the campus, while riot police from across the State have been mobilized and made over a dozen arrests. Predictably, police violence has broken out on the picket lines; only generating more support of the strike along with injuring several strikers.

But as support for the strike, which is fighting for a cost of living increase, grows to include more strikers and supporters, UC President Janet Napolitano has warned that there will be drastic “consequences” for strikers, including potential firings and even deportation of international students.

Wanting to know more about what is happening on the picket lines and to hear about the impact of police repression and threats made by the administration, we again reached out to folks in the Bay Area chapter of the Black Rose Anarchist Federation to learn more.

IGD: What has been happening with the strike since Monday?

So much has happened since Monday, it’s a bit hard to condense into the written form.

Perhaps the most important updates since Monday are that our numbers have expanded significantly. At the peak of our blockade and picket Wednesday, there were likely 500 – 600 graduate workers, undergraduates, faculty, staff, and non-university affiliates present.

Wednesday in particular also saw our most direct contact with the police to date. After being woefully outnumbered on Monday, local UCSC police called in reinforcements from UC San Francisco, UC Berkeley and UC Irvine, as well as CHP and Alameda County Sherriffs.

When some of our numbers elected to engage in civil disobedience by sitting down and linking arms in the intersection, police were able to move in and make 17 arrests — leaving bloodied, bruised, and with concussions. After these initial arrests, we have refrained from taking static positions that allow for the police to easily pick people off.

IGD: What have the police been doing on the picket lines?

Each day in the last week followed what became a semi-predictable pattern. We would begin with smaller numbers in the morning, not blocking the intersection. The police would watch us, but not intervene.

As each day went on and our ranks became filled out with later arrivals, we were then able to move into the street and completely shut down the entrance to the campus. This would then prompt the police to begin to mobilize from their staging area, form skirmish lines, and prepare to move in.

Other than the case on Wednesday when some sat down in the intersection, the police have refrained from making attempts at clearing the street. It’s possible that the university is restraining the police so as to avoid another PR disaster reminiscent of the pepper spray cop at UC Davis in 2009.

Frankly, it appears that they don’t have the numbers to break up the picket either. Even on Wednesday with more than 500 on the street, the police seemed like they were only able to muster about 75 – 100 cops.

Our speculation is that this is a budgeting issue for the university. It’s been revealed to us that UCSC has allocated $300,000 a day for police overtime and outside reinforcement. It seems as though they may be bumping up against their budgetary ceiling.

IGD: What has been the reaction to the police attacks?

No doubt support has flowed in to us. This includes more people showing up to the picket, material support for our strike fund, and the bolstering of our narrative in the media.

The UC seems to recognize that physically cracking down on the pickets would lead to poor news coverage and a depletion of their already expiring political capital.

So instead, they’re taking a different tact and threatening our jobs.

IGD: Can you talk about how people have been picketing? Is it just at the base of campus? Are other actions taking place as well?

As far as the wildcat graduate worker strike is concerned, picketing has been largely confined to campus entrances.

However, undergraduates have begun organizing to assert their own demands and to agitate for what they’re calling an undergrad student body strike. On Friday last week they conducted their own general assembly and then marched to the administration building on campus, finally ending by marching down at the base of the campus to join the picket.

Another interesting development has been the self-organization of Family Student Housing residents. Family Student Housing (FSH) is a bloc of on-campus housing specifically designated for graduate workers with spouses or kids. Earlier this week, it was revealed that the police had been using FSH common areas to take breaks and stage for the day.

When FSH residents came home to find that the cops who they had been facing down on the picket just hours before were kicking back in their community, they were incensed. They organized and demanded that the police be barred from FSH buildings and were successful in doing so.

IGD: Is the strike spreading out of UCSC? What other actions are taking place?

There continue to be nascent COLA campaigns of varying size on almost all of the UC campuses. Graduate workers on the UCSD campus, for example, marched to their own administration building to deliver a COLA demand this past week. Similarly, workers and students on the UCD, UCSB, UCLA, and UCB campuses have called for general assemblies to address the COLA issue.

We have yet to see strike action emerge on those campuses, but many graduate workers have traveled to our picket in solidarity. Through these interactions we’ve strategized and discussed how we might bring the strike to their campuses.

IGD: We saw that some STEM (Science, Technology, Engineering and Math) students joined the pickets, how are people outside of the university taking part?

Yes, this represents an important component of our campaign. Historically, STEM (Science, Technology, Engineering, and Math) workers have not been well organized through our formal union structure. This is both because these workers have been written off as “unorganizable,” but also because workers in these fields face a different set of conditions to workers in other fields on our campus.

Because our strike has put a great degree of emphasis on organizing at the departmental level, it has only taken a few militant and motivated STEM students to do what had previously been thought of as a waste of time and resources.

This past week, STEM workers marched from the campus to the picket in lab coats, holding beakers and test tubes while chanting “Together we fight, STEM won’t break the strike.”

This has greatly emboldened the rest of us.

IGD: What has been the reaction from the administration to the strike?

In a word: intransigence.

They have continued to stonewall us. The only communications that they have issued are those that make threats. One quite crude email earlier this week was sent out, reminding international graduate student workers that, if fired, they would face deportation.

However, the biggest development thus far came right before the weekend.

On Friday evening, UCSC EVC Lori Kletzer sent out a campus wide communication that contained an ultimatum for those of us on strike: either submit the grades that we have withheld by February 21st or be fired.

This email was quickly followed by a communication from UC Regents President and former DHS Secretary Janet Napolitano, which echoed this same threat.

IGD: What will happen in the coming days and weeks do you predict?

It’s hard to say and it will likely become more clear after our next general assembly on Tuesday.

It’s unclear whether the Regents are willing to follow through with the mass firing that they have threatened. This would no doubt create a huge labor vacuum on the campus and would likely require faculty to fill the gap in the interim — something that our faculty allies have already suggested that they would completely reject.

For example, this quarter I am a TA for a class with 150 students. There are two other TA’s working this course. Each of us has 50 individual students that we teach, which equates to about 30 – 40 hours of work per TA, per week.

Now, if all of us were fired, that would ostensibly mean that the professor leading the course would then be forced to take on all of that extra labor.

It seems highly unlikely that they could get away with dismissing all of us, but then again, no one thought Reagan would fire 11,000 PATCO workers.

If the Regents do follow through with the nuclear option of firing us en masse, I don’t doubt that it would lead to some sort of larger rupture, either on the UCSC campus or across the whole of the UC system.

We are of course also working to create the conditions for this rupture regardless of whether our jobs go to the chopping block or not.

IGD: How can people support?

If you are in or near Santa Cruz, come to the picket everyday between 7:30 AM and 5 PM.

If you’re in a town with a UC campus, consider trying to reach out to the nascent COLA campaigns on those campuses.

https://itsgoingdown.org/interview-wildcat...
Add Your Comments
Support Independent Media
We are 100% volunteer and depend on your participation to sustain our efforts!