Add an Event
Newswire
Calendar
Features
Home
Donate
From the Open-Publishing Calendar
From the Open-Publishing Newswire
Indybay Feature
Publish to Newswire
Add an Event
Related Categories: California | Santa Cruz Indymedia | Education & Student Activism | Labor & Workers
California graduate students on wildcat strike
by Evelyn Rios (WSWS Repost)
Wednesday Dec 11th, 2019 5:03 PM
Beginning Monday, a group of graduate students at the University of California, Santa Cruz began a wildcat strike demanding a cost-of-living wage increase. The graduate students are demanding an end to their precarious financial situation, which many students report results in regularly skipping meals, spending some 50-80 percent of their income on housing in one of the most expensive rental markets in the US, and overall heightened stress levels in struggling to meet basic needs. 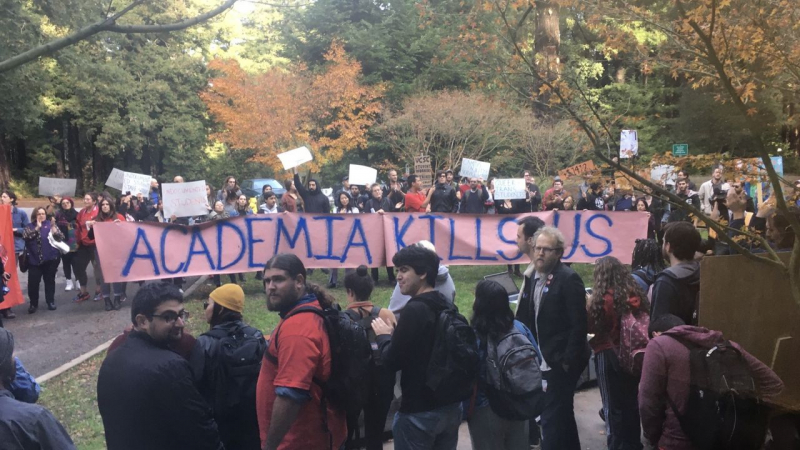 original image (1280x720)
The group of UC Santa Cruz graduate students is striking in defiance of their union, the United Auto Workers (UAW) Local 2865, and have announced that they plan to withhold students’ grades until they are given a cost-of-living adjustment (COLA) raise of $1,421 per month. The strike coincides with the end of the fall quarter, with students’ grades due on Wednesday, December 18.

The UAW is hostile to any genuine struggle by graduate students and has distanced itself from the strike and not made comments to media agencies. UAW officials are no doubt working behind the scenes with university officials to shut down the strike as soon as possible. Striking students have lashed out at the UAW on social media for presenting them with “a contract that didn't serve us and ignored the fact that 85% of UCSC students voted to reject the contract and strike then!”

All UC unions, including the UAW, have negotiated a “no strike” clause for the duration of contracts, and verbiage that if a strike is planned the UC administration must have 10 days’ notice, giving it ample time to hire scab labor and lessen the impact.

The clash between the UCSC grad students and the UAW should serve as a warning to 4,500 striking Harvard grad students, who are members of the Harvard Graduate Student Union–United Automobile Workers. The UAW has isolated the two-week strike while promoting Democratic politicians whose party has waged a war against educators no less viciously than the Republicans.

Grad students must be prepared to defy back-to-work orders by the UAW and expand their independent initiative through setting of rank-and-file strike committees to extend the struggle to all university workers and reach out to teachers and other sections of the working class for support.

Running their strike primarily via social media and Twitter, the UCSC grad students announced that they are demanding “A COLA for every graduate student, regardless of residence, visa, documentation, employment or funding status, to bring us: 1. Out of rent burden; and 2. To parity with grad students at UC Riverside. At current rates, this amounts to $1,412 a month.”

Graduate students across institutions of higher learning face burdensome workloads, teach a large part of the university’s curricula, and perform the vast majority of grading for professors. For many students, their compensation for this work goes to covering tuition costs, while many are forced to take numerous additional jobs to meet basic needs.

The decision to engage in wildcat action Monday came after nearly three months of negative and unfruitful interactions with the UC Santa Cruz administration.

The students outline on their Twitter that “as early as September 2019, organizers as part of the [Graduate Student Association] GSA, UAW 2865, and from across campus have been calling for a Cost of Living Adjustment. The demand has been presented to UCSC administration without equivocations.”

A demonstration was called on November 7 when 200 students marched to Kerr Hall to deliver their verbal and written demands to Chancellor Cynthia Larive and Campus Provost and Executive Vice Chancellor Lori Kletzer.

The next week, on November 12, nearly 80 students met to strategize. Following the meeting, a graduate student sent an email to Chancellor Larive and Executive Vice Chancellor Kletzer urging the administration to meet their demands. The striking graduate students noted that Kletzer responded with intimidation and charged that the actions of students were in violation of the student conduct handbook.

All graduate students were copied on the email exchanges, which “flooded the inboxes of administrators and fellow students. It was in these mass email exchanges that calls for a strike began,” according to their social media. The same evening six out of seven elected UAW graduate student representatives resigned from their positions to support the more militant action.

Within the next two days, the students circulated a straw poll on a decision to strike. The overwhelming response was in support to “strike NOW” and within 24 hours, a Strike Assembly was convened with “over 250 students attending (in person and via zoom) who in turn also voted to strike NOW and withhold grades.”

Tuesday morning the UCSC administration sent a note to undergraduates insinuating that the grade strike was an imposition to the academic progress of the undergraduates and threatens their focusing on studying and finals.

Striking graduate students invited administrators to meet with them Tuesday afternoon, but were refused in an email from Quentin Williams, Acting Vice Provost and Dean of Graduate Studies, who responded that the administration is refusing to meet with students. “While you are under contract,” he said, “we are unable to negotiate the terms and conditions of our employment with you. We will not meet with you during an illegal work stoppage, but will be willing to meet with you after the work disruption is over...”

UC graduate students must fight to link up with other UC workers, temporary, and subcontract workers who face the same conditions to prevent the isolation of their strike. Their wildcat action comes less than one month since 25,000 AFSCME workers were called to engage in their sixth 24-hour stunt strike. AFSCME is working overtime with UC to wear down workers and prepare them for a concessionary contract.

The conditions facing Santa Cruz graduate students are the same for millions of other workers throughout the state. A report by USA T oday in June of this year found that Santa Cruz ranked as the least affordable city in the country, followed by San Jose, San Francisco, Honolulu and Santa Rosa. The report noted that a teacher making $63,000 would have to spend two-thirds of their salary to afford the median rent in the city.

UC actively works with the unions to balkanize the workforce by bargaining with at least 15 different unions to keep the workers from organizing and linking their similar struggles for a living wage, health and retirement benefits, and safe staffing levels for both patients and workers.

Conditions within the entire UC system are overripe for a mass strike to unite the largest nongovernmental workforce across the state including administrative staff, nurses, graduate and undergraduate students, food service dining and housekeeping staff.

A 2016 study by Occidental College found that 70 percent of all UC clerical and administrative employees face food insecurity, with 45 percent reporting “very low food security” stating that they often skip meals and go without food because they cannot afford it.

Among UC students, 42 percent report food insecurity, and within that 23 percent report at “very low” levels. Five percent of UC students reported in surveys that they experienced homelessness, and among students without the support of family or parents—the number is twice that, ten percent.

As the WSWS has stressed, the placement of Janet Napolitano, the former Secretary of Homeland Security under President Barack Obama, as President of UC regents is part of preparation by the financial oligarchy in anticipation of upheavals among workers and students.

UC graduate students must be warned that they face a brutal enemy in the UC Regents, which is bound to the highest levels of the Democratic Party ruling elite. Only rank-and-file committees—organizations that are independent of the unions and democratically controlled and elected by workers—can break through the isolation imposed by UC Regents and the trade unions.

The 11,746 Graduate students (UAW) throughout the UC System must link up with 25,000 housekeeping, janitorial, and food service staff (AFSCME), with the 11,363 clerical employees (Teamsters), with the 4,961 research support professionals (UPTE), with the 353 librarians (AFT), and with 14,599 registered nurses (CNA).

In order to realize their power, workers must begin organizing together and discuss the formation of rank-and-file workplace committees with their coworkers to break through the isolation of each section of workers by the unions and expand their struggles.