Add an Event
Newswire
Calendar
Features
Home
Donate
From the Open-Publishing Calendar
From the Open-Publishing Newswire
Indybay Feature
Publish to Newswire
Add an Event
Related Categories: California | Central Valley | East Bay | Santa Cruz Indymedia | Education & Student Activism | Labor & Workers
UC Santa Cruz Shut Down & UC Dining Halls and Offices Occupied
by It's Going Down
Friday Feb 21st, 2020 10:28 PM
In what is being referred to as “Doomsday,” UC President Janet Napolitano has given striking student workers at the University of California in Santa Cruz until midnight on February 21st to turn in withheld grades. 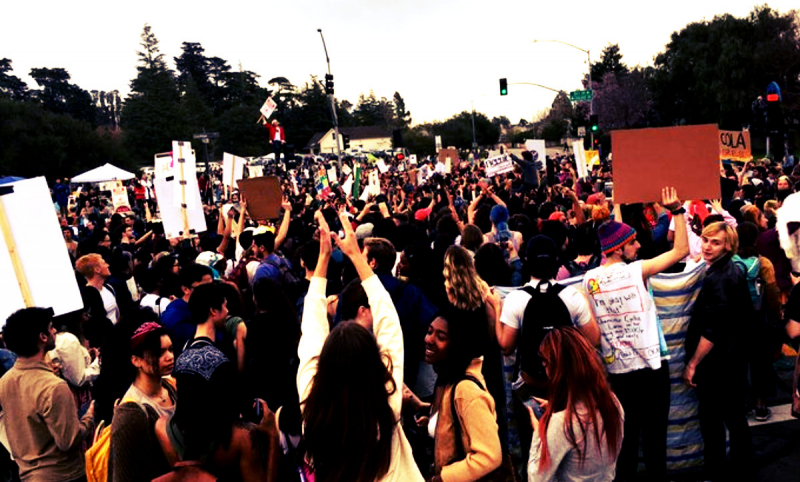 In what is being referred to as “Doomsday,” UC President Janet Napolitano has given striking student workers at the University of California in Santa Cruz until midnight on February 21st to turn in withheld grades. Teaching Assistants (TAs) have been refusing to turn these grades since late last December, when a wildcat strike was first launched to demand a cost of living wage increase. Last Monday at UC Santa Cruz, student workers began an escalation and launched a “full strike,” declaring they would shut down the campus.

On #ThisIsAmerica, we talked to @bayareabrrn about the #UCSCstrike, how workers + students are organizing autonomously + how the strike has been attacked by riot police. Plus resistance news, #WetsuwetenStrong updates, antifascist action + more. https://t.co/zPYS5uiAUF pic.twitter.com/jEte2W3pAr

Heeding the call, hundreds of students took part in pickets at the entrances to the Santa Cruz campus, shutting down the university. Campus administration responded by spending millions on mobilizing riot police to break the pickets, which last Wednesday resulted in police violence and several strikers being injured. In the wake of the police attacks, the pickets swelled as did support for the wildcat.

UC Davis grads are with our comrades at UC Santa Cruz. If they are terminated for striking for COLA, we will go on grading strike as well! @payusmoreucsc @ucd4cola #COLA4all pic.twitter.com/jEjAMpWDpr

As the strike entered into its second week, Napolitano issued a warning to the entire UC system, threatening to fire striking TAs if they did not turn in their grades – and has even stated that international students will be deported if they take part in strike action. As The Guardian wrote:

Lori Kletzer, the executive vice-chancellor of UC Santa Cruz, set a deadline for 11:59pm Friday for all graduate students to turn in their grades. “We are giving these students one final opportunity to fulfill their teaching responsibilities and show that they can fulfill future responsibilities,” she wrote. “Those who do not submit full grade information by February 21 will not receive spring quarter appointments or will be dismissed from their spring quarter appointments.”

For many students, that will mean having to drop out of their programs, Komori said. For international students like Komori, who is from Canada, that can put visas at risk. “It’s a big scary decision for a lot of people, but there’s been a lot of really positive conversations,” she said. “One thing is that our administration hasn’t guaranteed that we won’t face some kind of discipline or retaliation even if we do turn in the grades. We haven’t closed the poll but a good number, potentially a majority of people, still plan on withholding grades and will continue to hold them past the deadline.”

But if the actions that broke out across the University of California system on Friday, February 21st are any indication, the strike wave is growing across the UC system and students and workers aren’t backing down. In fact, hundreds of students across the University of California system have pledged to join the strike and also withhold grades if Napolitano holds true to her word of firing student workers. As one report wrote:

ALL POWER TO THE PEOPLE!!! pic.twitter.com/sRxMWYdqAh

Friday saw thousands of students, staff, and faculty take part in mass rallies, marches, street blockades, dining hall takeovers, and building occupations at almost every campus throughout the UC system. The actions hearken back to the wave of student occupations that broke out in California in 2009 and show no signs of slowing down. With the struggle centered around the rising cost of living and the housing crisis, issues that many can directly related to, the real question is: will the strike spread outside of the universities and spark a larger rebellion within greater society? Time will tell. Until then, check out our roundup of #COLA4All actions which took place today across UC campuses.

There were some UC Regents on campus right after @ucd4cola solidarity strike! We expressed our feelings to their face with an "Eat The Regents" and "Fuck the Regents, COLA in our bank account" chant. @SpreadtheStrike @payusmoreucsc @cola4all pic.twitter.com/KNcKhXDBKv

Emcee taking up the mic. Chants of “Police off campus / COLA in our bank accounts!” and “The UC is Wack.” @ucd4cola #COLA4all #spreadthestrike #UCD #DavisCA pic.twitter.com/1GADAGIBYw

Crowd at the west entrance meets the crowd at the main entrance! One thousand people strong holding the streets.⚡️💚 pic.twitter.com/rLg22rhJxa

UCSC grad students are striking because our school doesn’t pay us enough to live here. Striking grads are being threatened by UCSC with jail time, deportation, and now firing… but the strike continues! @payusmoreucsc pic.twitter.com/sC444igtDi

Massive march meets the picket line and pours into the streets at UCSC as part of UC-wide action for COLA and to #defendthestrike and #spreadthestrike. @payusmoreucsc pic.twitter.com/gxiBO3K5Di

Massive converging rallies between undergrads, staff, faulty, workers, and community members has once again shut down both entrances to campus. #UCSCstrike #COLAstrike pic.twitter.com/I9zplbQnZD

750+ turned out on 12 hours notice at #UCSB march for #COLA4all and against retaliation against #UCSCstrike. Occupation of Cheadle administration building is ongoing. pic.twitter.com/KFV4Rrow5O

Graduate students have been here since 8 a.m. this morning, and plan to stay here until midnight tonight. pic.twitter.com/mUzSnty8kr

Me and other UCI undergrad and grad students occupied our admin building to try and talk with our administration to get a COLA for UCI pic.twitter.com/A06zNiH9TR

Discussing the situation on other UC campuses, incl. the alumni at #UCI who was arrested trying to get a transcript, chants of “When grad students are under attack, what do we do —STAND UP FIGHT BACK!” #COLA4all #MarchonMrak #Spreadthestrike @ucd4cola pic.twitter.com/q4ulo8pimr

The strike IS spreading! Here at UCSD we took over the library and they locked us out–including undergrads who are trying to study. Statewide, workers and students are rallying behind Santa Cruz. pic.twitter.com/pGr1bmxU6X

They have almost shut down the whole intersection pic.twitter.com/EKjV6n2CSZ

https://itsgoingdown.org/uc-wildcat-strike...
Add Your Comments
Support Independent Media
We are 100% volunteer and depend on your participation to sustain our efforts!