On February 23, an update posted on GoFundMe by Jane Komori states, "In addition to blocking our website on their network, EVC Kletzer took the openly authoritarian step of forcing department chairs to run all communications with students through her. These petty actions have more in common with dictatorships than universities." 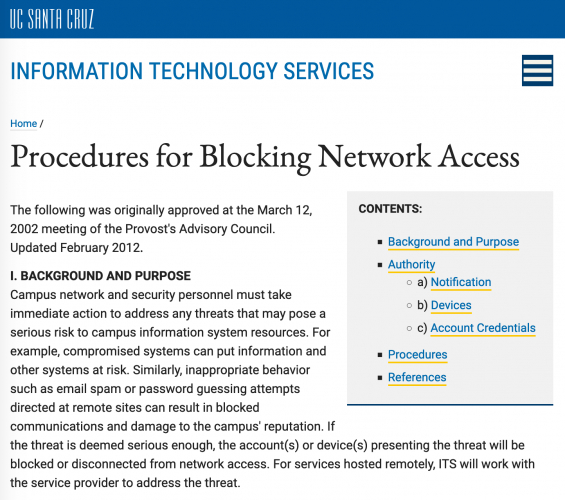 "Campus network and security personnel must take immediate action to address any threats that may pose a serious risk to campus information system resources.

"If the threat is deemed serious enough, the account(s) or device(s) presenting the threat will be blocked or disconnected from network access.

"Campus network and security personnel have the authority to evaluate the seriousness and immediacy of any threat to campus information system resources and to take action to mitigate that threat. Action that is taken will be responsible and prudent based on the risk associated with that threat and the potential negative impact to the campus mission ..."

For more information on the wildcat strike at UCSC, where UC graduate student workers are fighting for a cost of living adjustment, visit:

The full update posted on February 23, 2020 to GoFundMe is reprinted below:

Coming into Friday, many were understandably scared. ASEs were worried—with good reason—that the administration would immediately follow through with their threats to fire hundreds of graduate students. Many of us who committed to withholding grades despite these threats were concerned about facing this power-mad administration alone. UC President Napolitano and EVC Lori Kletzer refused even basic requests for non-retaliation in exchange for grades, as well as instituting unprecedented forms of censorship. In addition to blocking our website on their network, EVC Kletzer took the openly authoritarian step of forcing department chairs to run all communications with students through her. These petty actions have more in common with dictatorships than universities.

It was both heartening and surprising, then, that nearly everyone currently withholding grades have withheld past the so-called “doomsday” deadline. In a spreadsheet compiling the names and circumstances of those facing firings, there are women in the final months of their pregnancy facing the loss of their healthcare, international students facing deportation, and parents scrambling for work under the looming loss of childcare. In the face of a cowardly and heartless administration, we have held strong!

On Friday, nearly one thousand students, faculty, and staff blocked both entrances to UCSC, forcing the administration to cancel all classes past 1:00 PM. Across the state, thousands of students marched on every UC campus. Some occupied buildings, others threatened grading strikes if the administration followed through with its plans to fire striking workers. These escalations show that student workers across the state refuse to stand by as an administration employs police brutality, fires pregnant women, and deports its most vulnerable students.

How has the administration responded? Despite their threatening and dismissive rhetoric, no further threats or “pink slips” were issued as the deadline passed. Late Friday night, Napolitano finally admitted what she has known all along: there is a crisis, and she must meet with graduate students. While she made the bizarre choice to meet a group of students unaffiliated with UCSC or the statewide union*, this reversal shows that their hardball techniques are not working.

We are not in the clear. What is clear is that the administration has no other tools to suppress this movement. Their final attempt to decapitate the COLA campaign has failed. This will be a bitter fight, but it is a fight we can win.

To continue this fight, we need your support. Many of you have been donating 14 or 15 dollars at a time. We appreciate this and ask you to give again today if you can. Next week is the first time that workers may see their wages garnished, and it is critically important that we have the resources to support the most vulnerable among us. We need to start week three with a show of force, and let Napolitano know: we will not stop until we get a COLA!

Please consider making a 14 dollar donation to our campaign and help us defeat Napolitano and Kletzer’s authoritarian takeover of public education.

*The UCGPC (the University of California Graduate and Professional Council) who immediately rejected this request and directed President Napolitano to the UAW.

PS, we did submit one grade to Napolitano and Kletzer, an F:
§Giant "F" to UC President Napolitano and UCSC Administration
by Spread The Strike! Monday Feb 24th, 2020 2:23 PM 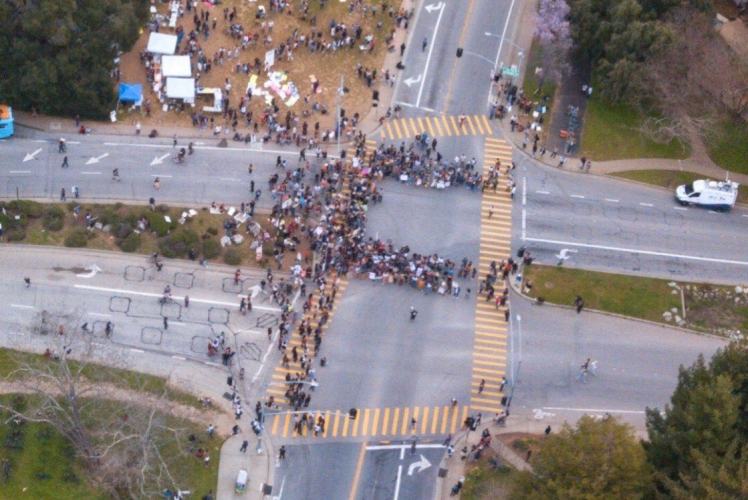 We are hundreds of graduate students at UC Santa Cruz fighting for a living wage. We are on a wildcat strike for a Cost of Living Adjustment!
Add Your Comments
Support Independent Media
We are 100% volunteer and depend on your participation to sustain our efforts!