Add an Event
Newswire
Calendar
Features
Home
Donate
From the Open-Publishing Calendar
From the Open-Publishing Newswire
Indybay Feature
Publish to Newswire
Add an Event
Related Categories: Santa Cruz Indymedia | Education & Student Activism | Labor & Workers
Striking University of California-Santa Cruz grad students defy UAW, arrests and threats of termination
by Stewart Bernays and David Brown (WSWS Repost)
Tuesday Feb 18th, 2020 2:13 PM
February 18, 2020 - Graduate student instructors (GSIs) and teaching assistants (TAs) at University of California-Santa Cruz are beginning the sixth day of their wildcat strike to demand a cost of living adjustment. Like many educators in California, grad students have confronted stagnant wages alongside skyrocketing rents that leave them struggling to survive in one of the most expensive cities in the United States. Last December, grad students initiated a grading strike to demand the increase. 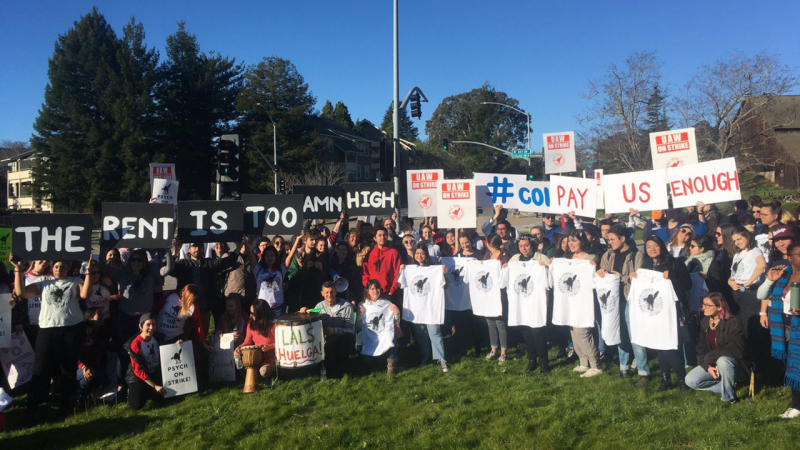 original image (1280x720)
The grad students are demanding an increase in pay by $1,412 per month, which would increase the average monthly pay of a student worker to $3,812. In Santa Cruz, however, the average price of a rental unit ($2,600) is more than the current average salary and would still be more than two-thirds of the average salary if students win their demand. Ten percent of UC students without family support have experienced homelessness. Food insecurity among students and workers is rampant.

At least 17 grad students were arrested last Wednesday as hundreds of strikers confronted police and California Highway Patrol officers during a mass protest, which was called in defiance of the United Auto Workers (UAW) Local 2865. The university administration has refused to negotiate with the strikers, insisting that they abide by the terms of the sellout agreement the UAW signed in 2018, which covers all nine teaching UC campuses.

On Friday, UC President Janet Napolitano issued an open letter to faculty and staff demanding the grad student obey the “no-strike” clause in the UAW contract and threatening to fire all those participating in the wildcat strike. Napolitano claimed agreeing to any of the strikers’ demands would “undercut the very foundation of an agreement negotiated in good faith by the UAW.”

On the eve of the job action, the campus Public Affairs office said, “This strike is prohibited under their current contract, and it is not sanctioned by their union. UC Santa Cruz has no authority to separately change an already agreed-upon, system-wide labor contract with the UAW.”

The fact that university workers are breaking out of the UAW straitjacket has clearly shaken Napolitano. As the former Department of Homeland Security secretary responsible for brutalizing immigrants and breaking up the Occupy protests under the Obama administration, she was brought in to lead the UC system and suppress student opposition to fee hikes and the attack on free speech and other democratic rights. During her tenure she relied on the UAW apparatus as a labor contractor to keep GSIs working despite poverty wages.

In response to Napolitano’s threats to fire striking grad students, the GSA issued a statement calling on students to spread the strike across the UC system. The issues confronting Santa Cruz students are common to academic workers across the country who are expected to teach hundreds of students so the universities can hire ever fewer tenured positions.

The grad students are holding a mass assembly today to vote on what action to take. The International Youth and Students for Social Equality (IYSSE), the youth movement of the Socialist Equality Party, calls on all UC students and workers to spread the strike and fight for the mobilization of the broadest sections of the working class to defend the UC-Santa Cruz grad students against the threatened firing and further state repression.

To take this fight forward, the grad students should form rank-and-file strike committees, independent of the UAW, to spread the strike and appeal to all workers to defend their fight. They must reject the claims by organizations like the Democratic Socialists of America (DSA) that the UAW can be pressured to fight.

The UAW is not a legitimate workers organization, it is a criminal syndicate. The ongoing corruption investigation of the UAW has revealed that union negotiations took millions in bribes in exchange for signing pro-company contracts, while others embezzled money from workers’ paychecks to fund first-class air travel, golf trips, expensive homes and other luxuries. After losing hundreds of thousands of members due to its collusion with the auto bosses, the UAW sought to offset the loss of dues money by “organizing” other sections of the working class including academic student employees in the UC system in the late 1990s.

Grad students should consider any sell-out contracts signed by the UAW, along with its no-strike pledges, null and void. Instead rank-and-file strike committees should be established across the university system to push beyond “direct action” and build up support for a political fight against the Democratic and Republican parties, including Democratic Governor Gavin Newsom, which claim there is no money for decent wages even as they spend billions on tax cuts for Silicon Valley, Hollywood, the defense industry and the coming bailout of Pacific Gas & Electric.

Last Wednesday, hundreds of grad students participated in a large picket held in defiance of the UAW on Bay and High streets, a major intersection near the main campus entrance. In addition to the strikers, the event was attended by many undergraduate students and university faculty, including professors, who support the struggle.

After marching a group of student strikers linked arms and sat in circles in the middle of the intersection. Police surrounded and dragged away demonstrators one by one. Other students took their place only to be arrested too. A total of 17 people were arrested, according to UCSC spokesman Scott Hernandez-Jason, face charges of unlawful assembly, obstructing a public roadway and disobeying a lawful order.

In order to apprehend seated demonstrators, police employed “pain compliance” such as squeezing pressure points on demonstrators’ necks and ears. After students bravely endured such attacks, police resorted to crudely dragging them away one by one. One striker, James Sirigotis, Ph.D candidate in sociology, told reporters his experience: “At one point an officer grabbed me by the back of the head, grabbed me by my hair and threw me face-first onto the street. At that point, I felt something very, very hard on the back of my head. .. basically rubbing my face into the street.” A two square-inch patch of hair was missing after Sirigotis’ police encounter.

Students arrested in the strike have been subjected by administration to a two-week campus ban, excluding student housing for banned students who live on campus. The college administration has also initiated a fear campaign through the International Student and Scholar Services (ISSS), mailing out a threat to international students stating that their participation in the strike may jeopardize their immigration status: “Participation in a wildcat strike is not, in itself, a violation of your immigration status. However, any actions that result in student discipline or arrest may have immigration consequences, both on your current status and on possible future immigration applications you may make in the United States.”