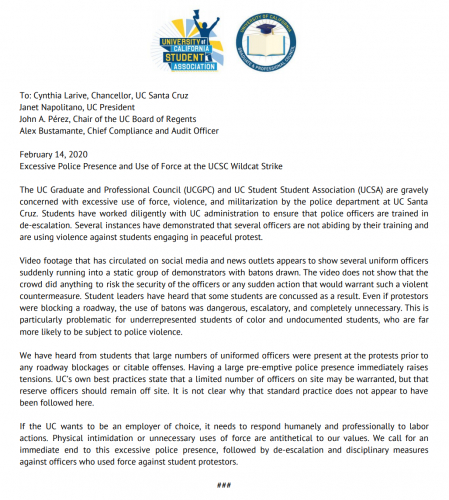 February 14, 2020
Excessive Police Presence and Use of Force at the UCSC Wildcat Strike

The UC Graduate and Professional Council (UCGPC) and UC Student Student Association (UCSA) are gravely concerned with excessive use of force, violence, and militarization by the police department at UC Santa Cruz. Students have worked diligently with UC administration to ensure that police officers are trained in de-escalation. Several instances have demonstrated that several officers are not abiding by their training and are using violence against students engaging in peaceful protest.

Video footage that has circulated on social media and news outlets appears to show several uniform officers suddenly running into a static group of demonstrators with batons drawn. The video does not show that the crowd did anything to risk the security of the officers or any sudden action that would warrant such a violent countermeasure. Student leaders have heard that some students are concussed as a result. Even if protestors were blocking a roadway, the use of batons was dangerous, escalatory, and completely unnecessary. This is particularly problematic for underrepresented students of color and undocumented students, who are far more likely to be subject to police violence.

We have heard from students that large numbers of uniformed officers were present at the protests prior to any roadway blockages or citable offenses. Having a large pre-emptive police presence immediately raises tensions. UC’s own best practices state that a limited number of officers on site may be warranted, but that reserve officers should remain off site. It is not clear why that standard practice does not appear to have been followed here.

If the UC wants to be an employer of choice, it needs to respond humanely and professionally to labor actions. Physical intimidation or unnecessary uses of force are antithetical to our values. We call for an immediate end to this excessive police presence, followed by de-escalation and disciplinary measures against officers who used force against student protestors. 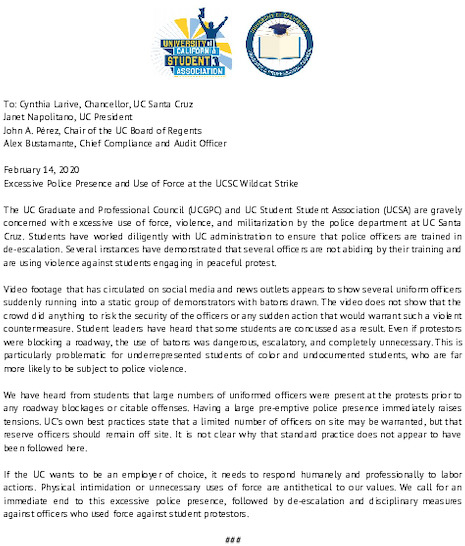