Add an Event
Newswire
Calendar
Features
Home
Donate
From the Open-Publishing Calendar
From the Open-Publishing Newswire
Indybay Feature
Publish to Newswire
Add an Event
Related Categories: California | Central Valley | Santa Cruz Indymedia | Education & Student Activism | Labor & Workers
A Report on the First Week of the Santa Cruz Wildcat Strike
by It's Going Down
Wednesday Feb 19th, 2020 4:31 PM
When Santa Cruz student-workers extended their grade strike to a full-scale work stoppage on February 10th, others of us across campuses began developing ways to support it. 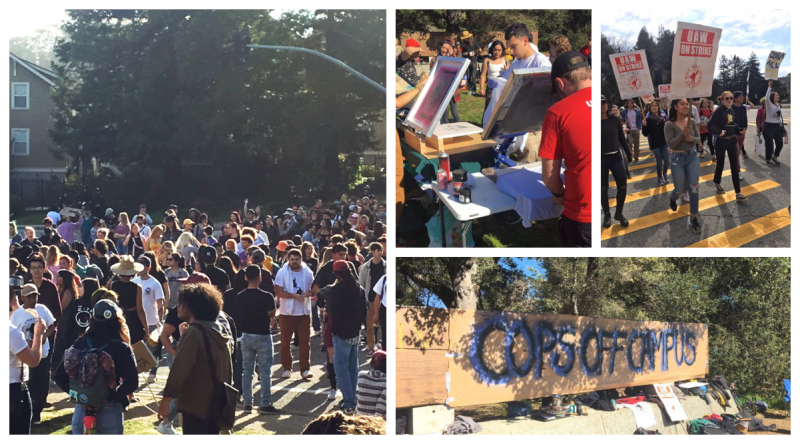 #COLA4All as Commune: A Report on the First Week of the Santa Cruz Wildcat Strike

The following is a personal account and blow by blow of the first week of the growing wildcat strike on the UC Santa Cruz campus by grad student workers.

I’m a graduate student housed in the Bay Area who works in Davis as a teaching assistant. Every Monday and Wednesday for the past six weeks I’ve commuted sixty-plus miles to attend class lecture and host office hours, and the same sixty-plus miles back. Between those trips, I grade student papers, quizzes, exams, and with the little time I have left, I try to write a dissertation that few will (care to) read. Isolation is often the marker of graduate student-worker life. Alongside isolation, soaring living costs and underpayment crush us under their weight—one in three, and at some campuses nearly one in two, of us report signs of moderate to severe depression and anxiety. But when UC Santa Cruz student-workers began withholding grades in December to demand a Cost of Living Adjustment, enthusiasm spread and relationships emerged within and across other UC campuses.

We weren’t so alone anymore.

When Santa Cruz student-workers extended their grade strike to a full-scale work stoppage on February 10th, others of us across campuses began developing ways to support it. Many held solidarity actions—marches, forums, speak-outs—and called for General Assemblies to cultivate mass support. While we rallied Day One on our respective campuses, we watched police armed with batons brutally charge strikers, arresting one person and giving another a concussion. On Day Three, we watched them intensify their attacks, arresting nearly twenty more. But we also watched faculty in graduation regalia march to the campus entrance picket to stand with their students. We watched people like our students link arms with each other and people like us in the face of repression. And we watched everyone line dance together.

Driving those sixty-plus miles west on the night of Day Three, I knew I couldn’t sit alone at my desk furiously refreshing social media for updates. Through connections with student-workers at other nearby campuses, I put out a call for a caravan with others living in the Bay to take the trek with me. Within minutes, a Berkeley graduate student-worker responded. We set out planning logistics for where and when to meet and leave the following day. To our surprise, we lived only a few doors from each other.

Sometimes, we really are that isolated.

On our ride, we wondered aloud what the day would bring. Would it be filled with teargas and truncheons? Or could it be, like is often the case in their partner’s home country, filled with the effluvia of community building, a temporarily joyous respite from the drudgery of late-stage capitalism, creeping totalitarianism, modern life (take your pick)?

We were greeted by what can only be described as communalizing festival. Hundreds of picketers laughed, danced, sang, and chanted with each other.

Arriving in the late morning, we were greeted by what can only be described as communalizing festival. Hundreds of picketers laughed, danced, sang, and chanted with each other. A makeshift percussion section, instrumented with half a drum set, bottles, spoons, and pots reminiscent of Quebecois Casseroles, took up residency in the nearby street median, keeping the beat for throngs of crosswalk picketers throughout the day. We beckoned passing drivers to honk their horn to show their support, with no attempts made to prevent cars from entering or exiting the university. Today wasn’t so much about them, as it was about each other.

To fuel the day’s activities, organizers used strike funds to purchase heaping trays of Mediterranean food from a local business at below-market rate prices. That strike fund draws contributions not only from rank-and-file student-workers who hatched the strike, as business unions’ funds often do; nearly one thousand individual contributions averaging $51 from patrons across the state, country, and globe have raised nearly $50,000 to provide not just for those on strike, but for their supporters too. Unlike business unions’ strikes, where members exchange their check-in signature for a half-sandwich or a slice of pizza, Santa Cruz student-workers eschewed any such protocol. When food arrived, it didn’t matter what institutional category you typically filled: when you grew hungry, you filed into line where you could meet a new friend and receive a filled plate, no questions asked and no one turned away. For many, our low wages and harsh rent burdens means skipping lunchtime meals is the norm. Pairing widespread financial support and local discounts with a dedicated refusal to be institutionally wedged apart interrupted that normalcy. Today was different.

Around 2:00PM, hundreds more led and primarily comprised of STEM student-workers marched from the other side of campus to join us. One of these picketers explained how they are often financially supported through research funding. Consequently, many may rarely or never assist in teaching university courses and could potentially not qualify for COLA if the university tries to meet the demand solely for formally unionized workers. But their backing remained undeterred: “I support this strike if I won’t directly benefit from it. I support it because it’s right.”

These STEM student-workers led us to overtake the four crosswalks that had been the site of state violence just days before, ostensibly precipitated by unlawful assembly and halting traffic. Chanting common refrains, picketers wouldn’t be stopped this time. As police began to regroup, one march leader mic check’d the crowd: “In the interest of chillness (In the interest of chillness), let’s head back (let’s head back) onto the grass (onto the grass) to party (to party!)”.

Today wasn’t so much about them

Once on the field, organizers made some brief remarks. They listed upcoming events, including a teach-in about Santa Cruz’s radical organizing history, and the provision of childcare at the base camp in preparation for Day Five’s rolling pickets. Sharing knowledge and meeting each other’s needs meant that anyone could participate however they saw fit. That camaraderie sits at this campaign’s heart: taking action and living fully for and with each other.
Cheers met these announcements as an electrical engineer-turned-deejay fully faded music into the PA system, allowing the swell of undergrads, grads, faculty—at our core, people—to turn the patch of grass into a makeshift dance floor.

Numerous organizers reported that cultivating festival was a deliberate strategy. Just as we practice individual self-care, we must practice it collectively. This heals morale and boosts spirits for those on the front line. An oft-repeated chant against the state, capital, and its interlocutor institutions resounds “Who protects us? We protect us.” As Santa Cruz strikers exemplify, we must append to it “Who cares for us? We care for us.”

An oft-repeated chant against the state, capital, and its interlocutor institutions resounds “Who protects us? We protect us.” As Santa Cruz strikers exemplify, we must append to it “Who cares for us? We care for us.”

In this way, cultivating festival also builds community. More than anything, this wildcat strike illustrates what a life without work could look like: collapsing institutional categories, sharing falafel, carrying the song together with our voices when the generator fails, seeing and being with each other as whole people. It’s in the conflict that we forge the commune, but as a local student-worker put it, “it’s in the celebration that it’s nourished.”

Inspiration is often hard to come by; and when it’s found, it’s often fleeting. When we find it, when our coworkers, student peers, and fellow folks lay that groundwork, we must flourish it. Let’s get this COLA – and a better world, while we’re at it.

How you can support the strike:

I am _____ from _____ and I am outraged that the UC continues to spend millions of dollars on law enforcement and threatens retaliation to discipline its UC Santa Cruz workforce instead of paying its employees living wages. I demand that you immediately end this campaign of abuse and meet their modest demands.

JVL is an underpaid and rent-burdened communist without adjectives organizing his coworkers and neighbors in Northern California.

https://itsgoingdown.org/cola-as-commune-d...
Add Your Comments
Support Independent Media
We are 100% volunteer and depend on your participation to sustain our efforts!