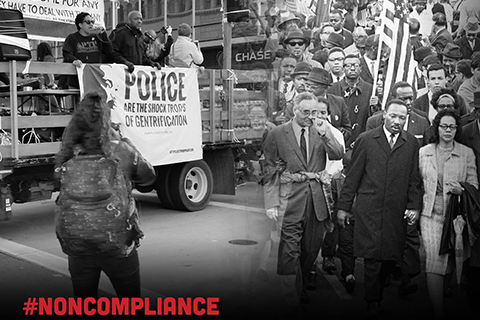 We Will Not Comply
Reclaim MLK 2018: 96 Hours of Non-Compliance with the Trump and Schaaf Regimes

For the fourth year in a row, the Anti Police-Terror Project has called for 96 Hours of action over the King Day Weekend. From Friday, January 12 through Monday, January 15, people will take to the streets in a series of direct actions, vigils, rallies and film screenings. The weekend concludes with the Reclaiming Kings Radical Legacy March on Monday beginning at 14th and Broadway.

SURJ-organized Protest in Rockridge to kick off MLK Weekend |

Message to Trump on MLK Jr. Day: Resign, You Racist!