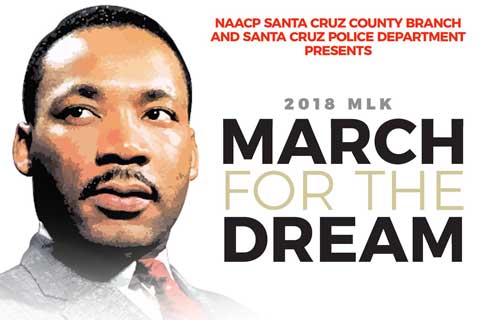 In honor of the Martin Luther King Jr. holiday, the Santa Cruz branch of the NAACP and the Santa Cruz Police Department are co-sponsoring an event titled "March for the Dream: Honoring the Past - Impacting the Future" on January 15. In an open letter to police chief Andy Mills, former city council candidate Steve Schnaar questions if SCPD's dream for a better society is really in line with the dream of King.

Steve Schnaar writes: "The department has a long way to go to be a champion of King's dream. For example, just a few years ago a SCPD officer was filmed slamming Richard Hardy, a homeless man who was already hand-cuffed, face first into a curb, opening a gash in his face. Although the public was promised an investigation, the City sealed the results from public view. From what I could gather, it seems the officer involved was neither charged with a crime nor removed from the force, and Mr. Hardy received no compensation."

Collaborations between social justice organizations and the Santa Cruz police have yielded questionable results in the past. In 2016, the NAACP partnered with the RCNV and Garfield Park Community Church to throw a party with the goal of bringing together the police with the social justice community in Santa Cruz called the "NAACP Peace Party". Among the officers that showed up to that party was Santa Cruz Police Lieutenant Christian LeMoss, who broke the arm of a 60-year-old disabled woman when he arrested her on May 9, 2008.

Related Features: Reclaim MLK 2018: 96 Hours of Non-Compliance with the Trump and Schaaf Regimes | Social Justice Organizations Party with Cop Who Broke Elderly Woman's Arm | Justice in the Streets or Party with Police