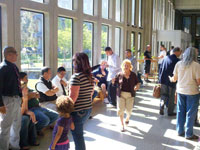 On July 20th, Cameron Laurendeau and Franklin "Angel" Alcantara went before Judge John Salazar in department 3 of the Santa Cruz Courthouse. There were about a dozen people, including four codefendants, supporting them in court. Alcantara and Laurendeau are among the eleven people known as the "Santa Cruz Eleven" who were each charged with two felonies and two misdemeanors in association with the Fall 2011 occupation of the vacant Wells Fargo Bank building located at 75 River Street in downtown Santa Cruz.