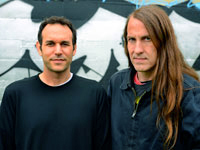 Santa Cruz County District Attorney Bob Lee has embarked on a full frontal assault against independent media in Santa Cruz by including four regular contributors to the independent news website Indybay.org amongst the eleven people charged with multiple felonies and misdemeanors after the occupation of a vacant bank building on November 30th, 2011. District Attorney Lee apparently believes it is his duty to dictate how events such as the occupation of the vacant bank at 75 River Street should be reported on by the media, and if he does not approve of the coverage, then journalists risk the DA bringing charges against them.

The National Press Photographers Association (NPAA) and The Reporters Committee for Freedom of the Press (RCFP) wrote a Letter Brief addressed to the court seeking dismissal of charges. In a related joint press release, the NPAA and RCFP wrote: "This is just the most recent case where journalists have been interfered with and arrested while covering Occupy Wall Street protests throughout the country. In almost every case, those charges — ranging from disorderly conduct and obstruction of governmental administration to trespass — have been dismissed or the defendant journalists have been acquitted." So why is Bob Lee pursuing these charges, at taxpayer expense, unless to unfairly promote one journalistic viewpoint over another by deterring independent journalists from closely reporting on social justice movements as they happen?