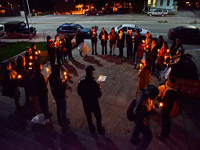 On February 27, several dozen community members involved with Occupy Santa Cruz joined in a solidarity march with occupies across the country and the world, protesting repression of the occupy movement and the associated police violence. The march started from the Santa Cruz County court house occupation location of Occupy Santa Cruz, and it made its way through the downtown to City Hall, where a candlelight vigil was held.

At City Hall, community members spoke about why, "they were there." The types of answers to that question varied widely, and some included details of political beliefs, personal inspirations, and diet choices. Many people spoke specifically about the resistance they encountered while expressing their beliefs during their participation in the occupy movement. Two of the so called 'Santa Cruz Eleven' spoke about how they were holding up in light of the recent criminal charges applied to them in association with the 75 River bank occupation that occurred last November.