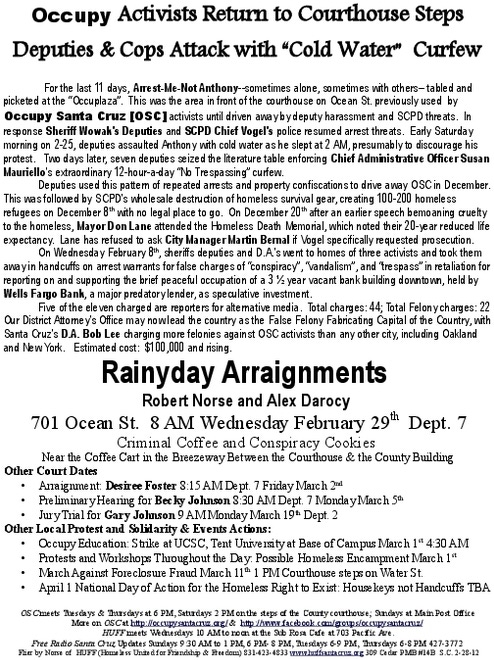 For the last 11 days, Arrest-Me-Not Anthony--sometimes alone, sometimes with others-- tabled and picketed at the “Occuplaza”. This was the area in front of the courthouse on Ocean St. previously used by Occupy Santa Cruz [OSC] activists until driven away by deputy harassment and SCPD threats. In response Sheriff Wowak's Deputies and SCPD Chief Vogel's police resumed arrest threats. Early Saturday morning on 2-25, deputies assaulted Anthony with cold water as he slept at 2 AM, presumably to discourage his protest. Two days later, seven deputies seized the literature table enforcing Chief Administrative Officer Susan Mauriello's extraordinary 12-hour-a-day “No Trespassing” curfew.

Deputies used this pattern of repeated arrests and property confiscations to drive away OSC in December. This was followed by SCPD's wholesale destruction of homeless survival gear, creating 100-200 homeless refugees on December 8th with no legal place to go. On December 20th after an earlier speech bemoaning cruelty to the homeless, Mayor Don Lane attended the Homeless Death Memorial, which noted their 20-year reduced life expectancy.

On Wednesday February 8th, sheriffs deputies and D.A.'s went to homes of three activists and took them away in handcuffs on arrest warrants for false charges of “conspiracy”, “vandalism”, and “trespass” in retaliation for reporting on or supporting the brief peaceful occupation of a 3 1⁄2 year vacant bank building downtown, held by Wells Fargo Bank, a major predatory lender, as speculative investment. Lane has refused to ask City Manager Martin Bernal if Vogel specifically requested prosecution. 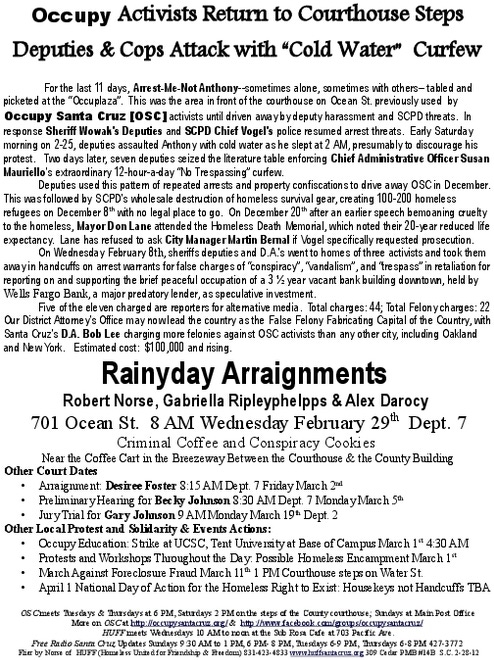 Download PDF (131.7KB)
Hopefully these flyers speak for themselves.

Come down to the Courthouse Wednesday morning and get your own hardcopy--or download and print out1
§
by Robert Norse Tuesday Feb 28th, 2012 11:08 PM 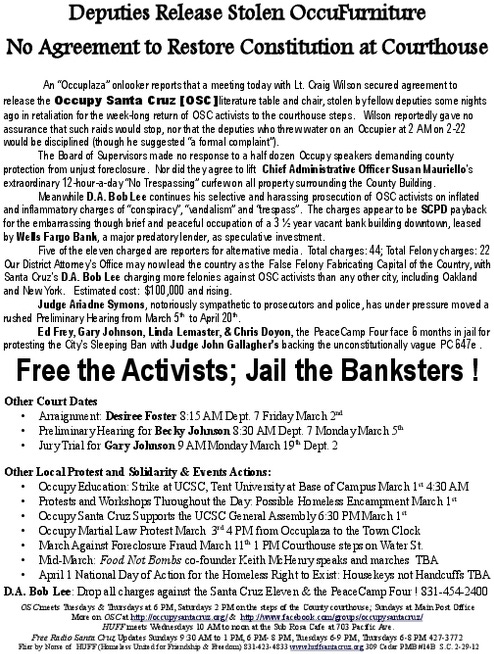 Download PDF (134.0KB)
Upcoming Events
Add Your Comments
LATEST COMMENTS ABOUT THIS ARTICLE
Listed below are the latest comments about this post.
These comments are submitted anonymously by website visitors.