On the show for March 26th, Chris Burnett of the Los Angeles Independent Media Center and co-host of Indymedia On Air, interviews Santa Cruz Indymedia photojournalist Bradley Stuart Allen, who's facing two felonies and two misdemeanors, including a felony conspiracy, for publishing photos of an Occupy demonstration.
Listen now:
Copy the code below to embed this audio into a web page:
Download Audio (2.2MB) | Embed Audio
Indymedia On Air, for March 26, 2012

CHRIS BURNETT: Alright, moving on, we are going to speak with Bradley Stuart Allen.

Since 2001, Bradley has been contributing coverage to Indymedia websites. Most of that coverage has been of events that took place in the city of Santa Cruz or at the university, University of California at Santa Cruz.

Bradley has also published reports from many other locations such as Miami during the demonstrations against the FTAA, Houston and New Orleans after Hurricane Katrina, and the barricaded streets of Oaxaca, Mexico.

His website began in June 2005 and serves as an archive of his Indymedia coverage since that time. He also created the site El Enemigo Común, or The Common Enemy. That's elenemigocomun.net. You can find this information on his website, which I just gave.

His photos have been published around the world; first through the Indymedia network, and then in printed books, newspapers, magazines, posters and flyers.

I'm very happy to have Bradley on the show. We've talked before, on Indymedia on Air. And Bradley has been one of, in my opinion, a shining example of what it means to be an independent media producer. And taking advantage of an independent decentralized global network.

Bradley, welcome to Indymedia on Air.

BRADLEY ALLEN: Thanks for having me, Chris.

CHRIS: And you're being charged with, felonies, a conspiracy, and then a felony to trespass. And as a media activist, you were covering an event. And we'll get into that event. But ultimately what is going to be happening here, on Thursday, March 29th. That's in this coming Thursday.

You are going to be in front of a judge. And there is going to be a callout for people to participate in calling the Santa Cruz District Attorney by the name of Bob Lee, for the next two days. That's tomorrow and Wednesday we're encouraging our listeners to get their pens and papers out, because we're going to give phone numbers and email addresses out. That you can participate in helping Bradley get off these ridiculous charges, in my opinion, and I think I'm sure in Bradley's.

So Bradley, why don't you tell us the story of what happened.

BRADLEY: Sure. As you mentioned, I have a long history, as an Indymedia volunteer, over ten years in Santa Cruz covering all kinds of events, ranging from, you know, art events, environmental events, to, you know, actions that involve police, and their responses to demonstrations.

And there was a demonstration on November 30th, 2011. And this was an announced demonstration. It was announced that it was going to be a picket in front of banks. And this is something that had happened previously in Santa Cruz, and so I went down there to cover this demonstration.

People met at the Santa Cruz County Courthouse, and then marched to a Chase bank. And then after a short rally at that Chase bank, people marched towards a Bank of America and a Wells Fargo bank, which is where the majority of people, the large majority of people on the march, you know, believed that people were headed to one of those banks.

But to, you know, most peoples' surprise, a vacant building, which used to be a bank building, was entered, and the people that were on the march, decided to occupy that building. And so I covered that occupation as a breaking news event.

CHRIS: And as a result of that coverage, you published a number of, I assume published a number of stories and photographs. You are being charged by the District Attorney of Santa Cruz with four counts. One was a felony, a conspiracy to commit a crime. One, which has been dismissed [and subsequently refiled], it's a felony vandalism charge. And you were charged with two misdemeanors; a trespass by entering and occupying, and a trespass and refusing leave private property.

Now, as a journalist, you're not the only one involved in this coverage, actually there's a photojournalist as well. But you. Both of you are being charged. But in this case, you're still being charged with a felony, a conspiracy to commit a crime. Is that correct?

CHRIS: Which I should mention that you are actually from LA originally, and now you are in Santa Cruz.

BRADLEY: Yeah, that's right. I was born and raised in Los Angeles. And I moved to Santa Cruz in the summer of 2000. And the Santa Cruz Independent Media Center got going, in 2001. I wasn't the founder of that organization, but I've been a part of it for a very long time.

CHRIS: So what is your strategy? And so tell us a little bit about what's coming up on Thursday, and what you would like listeners to do.

BRADLEY: Well, some of the things I want listeners to understand, is that we're looking at a case of selective prosecution, viewpoint discrimination, and I;m being charged with a conspiracy to make media. But what I talk about selective prosecution, for example, there was a staff photographer for the local newspaper who also shot photographs inside the occupied bank building, yet District Attorney Bob Lee is not pressing charges against that photographer.

So we're also talking about viewpoint discrimination, because they are trying to say that, I wasn't a journalist because, for example, my posting on Indymedia didn't make reference to an interview with a police officer. As if publishing photos and not interviewing a police officer means that it doesn't as journalism or something.

CHRIS: Well, you know, and I want to emphasize, I mean, you have a website up describing this situation. So that's tomorrow, Tuesday and Wednesday.

If you want to take action in defense of independent media, independent journalists, and Indymedia in general, that exposes, not only.... Bradley's... the context of this, as someone who is covering the Occupy movement... and they're being attacked.

This show will be archived by the way, if you want to go back and get that information, or share it with other people.

This is not the first time that independent media activists have been attacked, in fact killed. It's a job that we all need, and we should be supporting.

Bradley, what's your sense, in terms of maybe a couple.. We only have about three minutes left, but I want to get your reaction to the police brutality issues in New York. Do you think that this kind of charges being brought against media activists, and the covering of OWS, is related to a strategy of a crackdown on OWS? How do you see that?

BRADLEY: It does seem like there's parallels. I know that there's been over 70 journalists that have been arrested covering the Occupy movement, and it definitely seems like, they do not want stories. That they are working to decided, who gets to be a journalists, how a story gets to be covered, and who gets to cover that story.

So I think it's very much that, you know, we're seeing public relations at work, and, you know, that's why they're coming after myself as an independent journalist. That's how I feel. I feel there is connection to what's happening all around the country.

CHRIS: What the name of the other person who's been charged as well?

BRADLEY: Well, there's a total of 11 people that all received the same charges. There's four regular contributors to the independent news website Indybay.org. The other collective member, of Indybay, besides myself, his name is Alex Darocy.

I encourage listeners who care about independent media, who care about when the state, and District Attorney of Santa Cruz targets journalists for covering these issues, I urge you tomorrow and Wednesday to call that phone number, and just say something simple, which you have an example of by the way.

BRADLEY: Just wanted to thank you so much for having me. That this is really a case that is important to stand up for, because this is an attack not only against myself, but like you said, independent media, alternative media, and you know, the free press. Information must be free. So it's important to stand up, and speak out.

CHRIS: Right on. Bradley, thank you for all your work. I wish you the best on Thursday. I will be making that phone call tomorrow myself. And keep in touch, and let us know what happens.

BRADLEY: Will do. Thank you so much.

CHRIS: Alright Bradley, take care, and thank you for joining us tonight on Indymedia on Air.

BRADLEY: I'd love to do it again. Thanks Chris.

CHRIS: Alright, thanks. Alright, that's the end of the show. My name's Chris Burnett. If you want to email me, it's chris@indymedia.org, I-N-D-Y-M-E-D-I-A .org 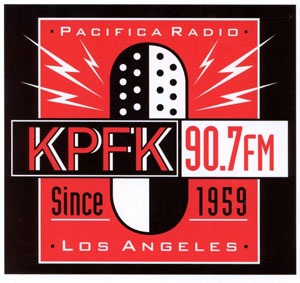 KPFK (90.7 FM) is a listener-sponsored radio station based in North Hollywood, California, United States, which serves the Greater Los Angeles Area, and also streams 24 hours a day via the Internet. It was the second of five stations in the non-commercial, listener-sponsored Pacifica Radio network.

KPFK began broadcasting in April 1959, twelve years after the Pacifica Foundation was created by pacifist Lewis Hill, and ten years after the network's flagship station, KPFA, was founded in Berkeley.

With its 110,000 watt main transmitter atop Mount Wilson, KPFK is one of the most powerful FM stations in the western United States. The station can be heard from the California/Mexico border to Santa Barbara to Ridgecrest/China Lake. A second 10-watt translator is licensed in Isla Vista, outside of Santa Barbara. The transmitter for that station is located atop Gibraltar Peak, allowing its broadcast to be heard over a large portion of coastal Santa Barbara County.
Add Your Comments
LATEST COMMENTS ABOUT THIS ARTICLE
Listed below are the latest comments about this post.
These comments are submitted anonymously by website visitors.