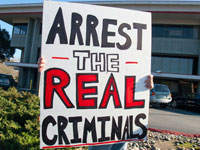 On February 7th, 11 people were criminally charged for an occupation which began on November 30th, 2011 of a former bank building, now owned by Wells Fargo, located at 75 River St. in Santa Cruz. The occupation was intended to turn the space into a community center hosting a slew of services the city does not offer. The accused are charged with multiple felonies and misdemeanors, including conspiracy, trespass and vandalism. According to District Attorney Bob Lee, more people may still be charged.

A solidarity demonstration began at 3:00pm on February 15th in front of the Wells Fargo branch at 74 River Street. Demonstrators held signs that read, "Arrest the Real Criminals", "Stop Foreclosures", "Drop the Charges Against the Santa Cruz Eleven", and "Community Spaces Not Vacant Places". By 3:40pm, Wells Fargo had locked their doors and instructed their private security guards to inform customers that the bank was closed.

"Occupy 74 River Street" Demonstration Brings Out Police | Is this how it is going to be now? |