Add an Event
Newswire
Calendar
Features
Home
Donate
From the Open-Publishing Calendar
From the Open-Publishing Newswire
Indybay Feature
Publish to Newswire
Add an Event
Related Categories: Santa Cruz Indymedia | Global Justice & Anti-Capitalism | Police State & Prisons
"Occupy 74 River Street" Demonstration Brings Out Police
by Alex Darocy (alex [at] alexdarocy.com)
Friday Feb 17th, 2012 8:20 PM
A solidarity demonstration was held at the Wells Fargo Bank located at 74 River Street on February 15, supporting the arrestees associated with the recent 75 River Street vacant bank occupation indictments. The demonstration was attended by approximately 40-50 community members who for the most part remained on one small area of the sidewalk in front of Wells Fargo. Though the demonstration was peaceful, a large number of police officers were present. [scroll down for videos and photos] 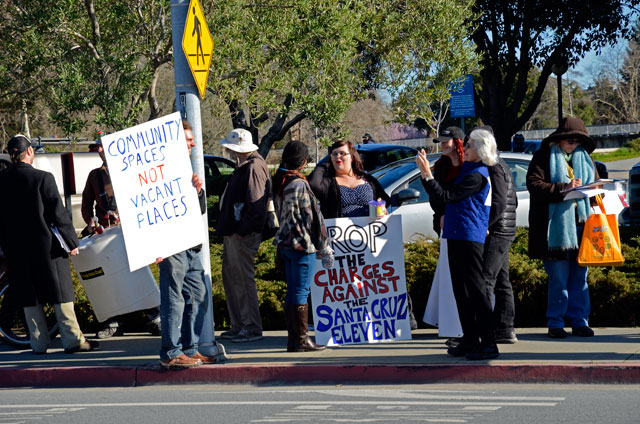 Wells Fargo owns the vacant bank that was occupied at 75 River Street, and both large buildings are located directly across the street from each other. The demonstration was organized by members of Occupy Santa Cruz, and the event announcement read, "22 felony charges have been filed against 11 peaceful Santa Cruz activists while banksters, such as those at Wells Fargo, who launder drug cartel money, illegally repossess our homes using forged foreclosure documents, and reward themselves with hundreds of MILLIONS in bonuses of OUR tax dollars walk free. Join Occupy Santa Cruz in front of Wells Fargo to demand the arrest and prosecution of the real criminals: THE BANKSTERS."

Wells Fargo closed for business, presumably due to the demonstration, but demonstrators were rarely, if at all, near the bank's entrances. After that everything was proceeding calmly until a man was detained by officers with the Santa Cruz Police Department when they said they saw him placing plastic 'police line' tape around a Wells Fargo sign that was near the sidewalk. The man communicated that he was himself a Wells Fargo customer, he showed his atm card, and then convinced the police that placing the police tape around the sign was not an act worth arresting someone for. They let him free without incident.

SCPD officers then noted that one of the arrestees was also currently on probation, and they detained him and began to search him on the 75 River side of the sidewalk in the middle of a growing group of demonstrators. Denica De Foy, a broadcaster and well known radio personality, was videotaping the officers detaining the arrestee who was on probation, and officers detained her also and began to take her information. Additional officers then arrived on scene, followed by Steve Clark, the deputy chief of police of the SCPD.

As soon as he arrived at the peaceful sidewalk demonstration and exited the patrol vehicle, Steve Clark, after being greeted by Brent Adams (who has extensively video documented Occupy Santa Cruz), immediately walked straight right up to him and threatened to add an additional criminal charge to those that Adams already faces (including felonies) in connection to the 75 River Street vacant bank occupation indictments (the charges were announced and warrants were issued on February 7). So far 11 people have been charged in association with the December 2011 occupation, and all are charged with felonies. A good majority of the group of those charged are journalists. Another person charged in the occupation and depicted in this video is homeless advocate and journalist, Robert Norse. Deputy Chief Clark accused Norse of lies about him on his website. Norse asked him to name the lies, and Clark was not able to.

I have taken thousands of photos of Occupy Santa Cruz and published many on Indybay. I am also one of those charged. As soon as Clark saw me videotaping him he said, "How are you, Alex. How's your warrant, did you get that taken care of?" This was presumably an implied dig, as I was one of the four people who tried to get down to court and get a court date when I first found out, but I couldn't because very shortly after the warrants were issued for all 11 people at once, the authorities arrived at my home and arrested me. The rest of the exchange with Clark went like this:

Later, Clark threatened to add to my case the same additional charges that he had also threatened Brent Adams with earlier. Brent and I repeatedly ask him what the charge could possibly be, and Clark named off a new, previously unheard of (to both of us) charge.

After deputy chief Clark left, and the detainees were released, the demonstration calmed down, and community members stayed for approximately an hour and a half longer. Officer Winston of the SCPD had been observing the entire demonstration, and as the crowd dwindled to just one last demonstrator and me, Winston and another officer drove their vehicle across the street and parked in the space directly in front of us. They turned the spotlight on us, and eventually communicated to the demonstrator that they had observed her chalking the sidewalk, and she wanted to know what ordinance covered that activity. At that time I heard officer Winston communicating over the police radio, to who I later found out was the lieutenant, that there were two people left at the demonstration, "Alex Darocy and an unidentified female." After some discussion, she was allowed to leave. I stayed until Winston and the other officer drove off. I wanted to observe the entire demonstration. 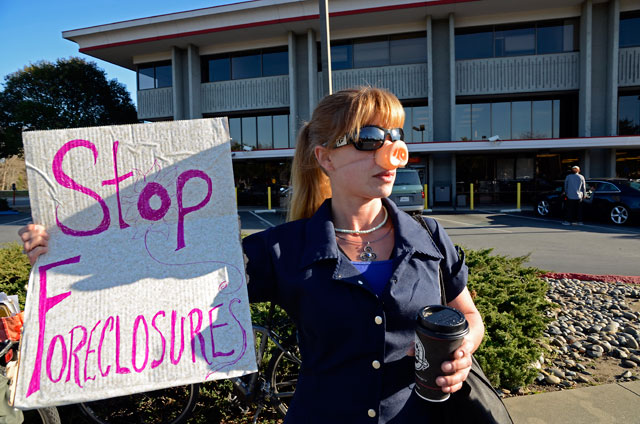 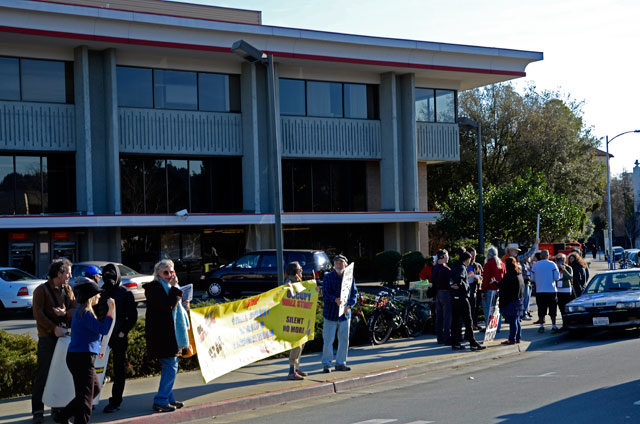 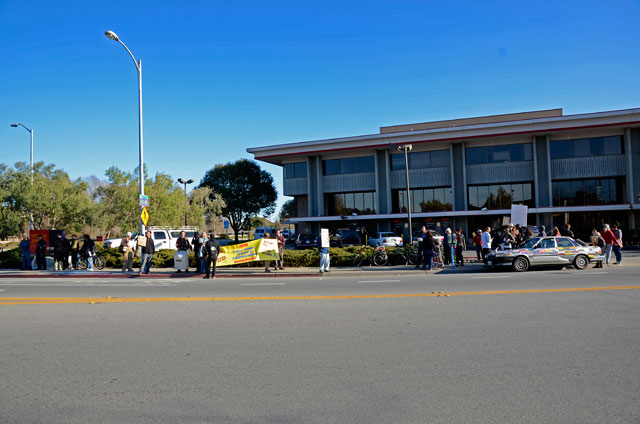 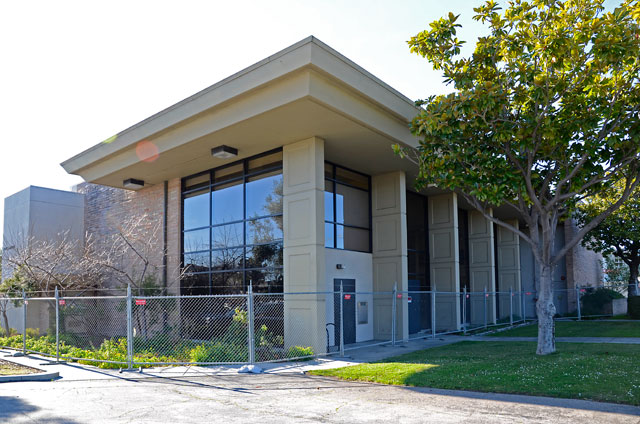 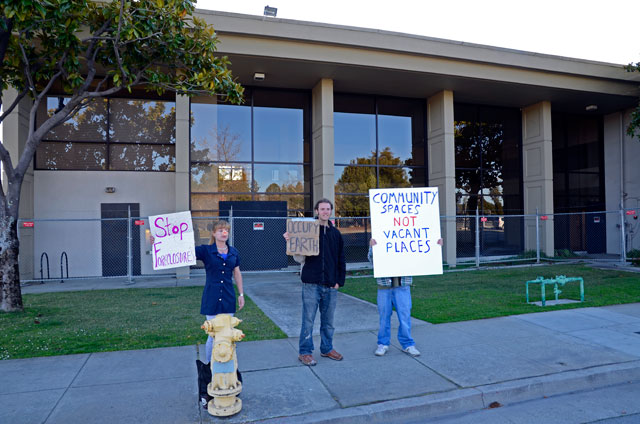 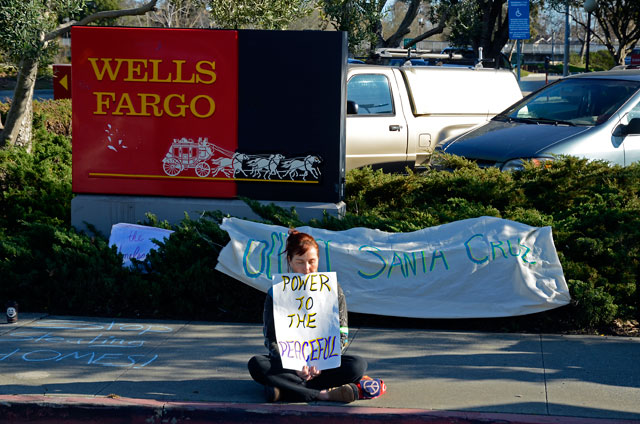 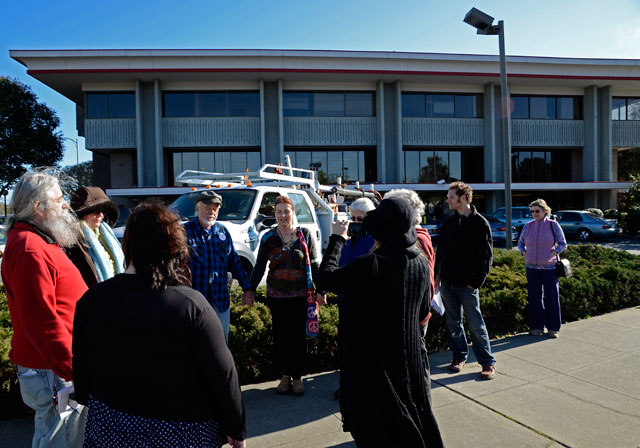 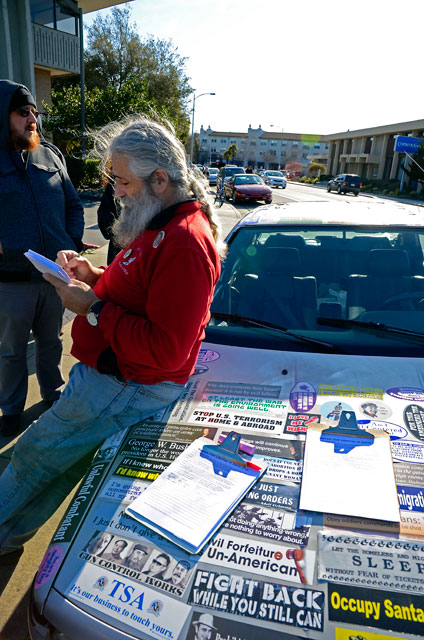 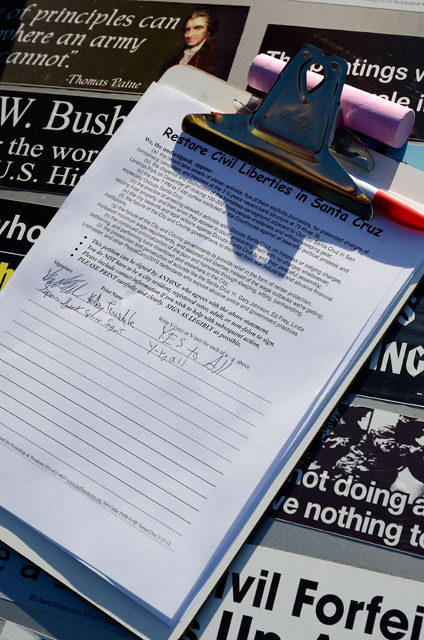 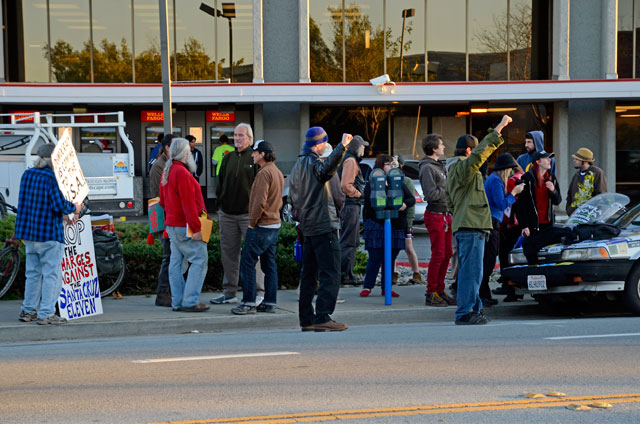 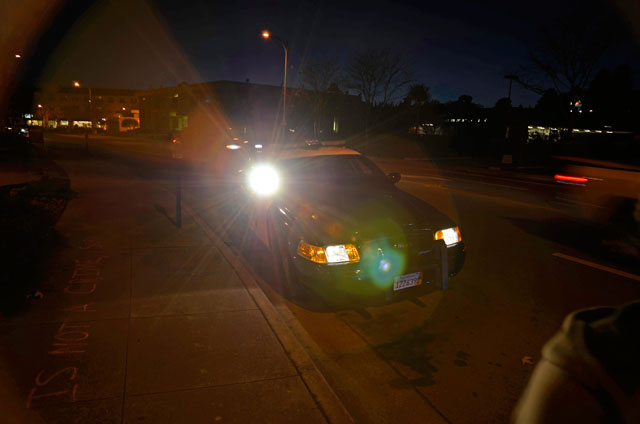