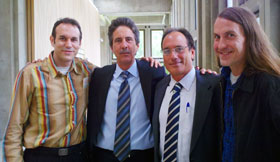 On November 30th, 2011, during the height of the Occupy movement, more than 100 activists marched down the street in Santa Cruz, one of hundreds of demonstrations taking place throughout the country at the time. At one point, the activists entered a vacant Wells Fargo bank building at 75 River Street – directly across the street from an active Wells Fargo branch – and began a three-day occupation, hoping to turn it into a community center.

Bob Lee and Rebekah Young of the Santa Cruz County District Attorney’s Office argued, without any evidence, that Allen and Darocy were "the media arm of the organization; the group’s propagandists," thereby validating Thaler as having been at the occupation as a bona fide journalist. On May 14th, 2012, Santa Cruz County Superior Court Judge Paul Burdick questioned the inconsistencies in the DA's argument and dismissed all charges against Allen and Darocy.

ACLU Brief in Support of Motion to Dismiss Charges