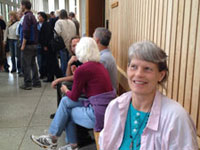 After listening to Officer William Winston of the SCPD and Det. David Gunter's testimony, Burdick challenged Assistant DA Rebekah Young by saying, "Ms. Young, you agree that none of these four defendants committed any act of vandalism."

Young offered that if there were any questions, she had brought Sgt. Harms and Officer Hedley to court "just in case." Neither could testify, however, since neither officer was on the prosecution's witness list. Burdick ignored her and went on, "I have no evidence in this record that any of these defendants committed any act of vandalism. You are relying on an 'aiding' and 'abetting' theory?"