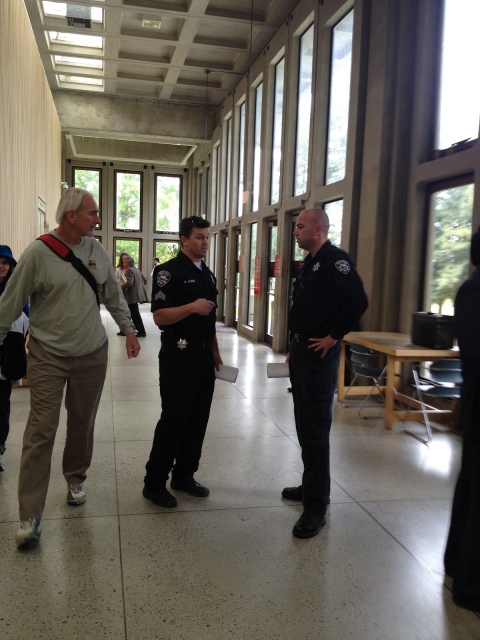 After listening to Officer William Winston of the SCPD and Det. David Gunter's testimony, Burdick challenged Assistant DA Rebekah Young by saying "Ms. Young, you agree that none of these four defendants committed any act of vandalism."

Young offered that if there were any questions, she had brought Sgt. Harms and Officer Hedley to court "just in case." Neither could testify, of course, since neither officer was on the prosecution's witness list. Burdick ignored her and went on, "I have no evidence in this record that any of these defendants committed any act of vandalism. You are relying on an "aiding" and "abetting" theory?"

"Do you have anything even by inference that anyone intended for anyone else to trespass?"

"It's more helpful, of course," Young offered," if you have defendants who actually committed the crimes while simultaneously witnessing 50, 80 others who also entered the building,"

"I'm concerned the evidence merely shows that the entire group was marching, as the flier explained 'to a foreclosed property' and intended to protest in front of the building. Do you have any evidence that suggests anyone intended to do anything other than mill about and not enter?"

Burdick continued. "My sense of what the evidence established, was that almost immediately someone entered the building. The officers testified there were "no signs of forced entry." Ms. Young, you need to establish that these four defendants intended to enter the building, occupy for a period of time, and stay after being ordered to leave. There isn't anything in the evidence to infer that they did.
All you've shown is that as part of the protest, when like others, they saw the doors were open, they went in and out to see what was happening."

"Your Honor, there's no fun in taking over a building you're allowed to be in. That was the point. To break the law."

"And, you've presented no evidence that any of them were in the building after November 30th."

Young: "You have to look at the group as a whole. They were meeting in concert with other protesters. Protesters, some of who were outside the building with their arms clasped."

"None of the four here."

Young: "Some were with bandanas covering their faces or hiding their identity. They knew they were trespassing."

Burdick: Ms. Young, you have presented no evidence that they wouldn't leave quietly if asked.
You paint with too broad a brush. The evidence is insufficient that anyone intended to commit trespass by design or agreement with other parties. I move to discharge all four defendants. Someone did commit a crime in that building. Crimes were committed by some individuals, and we don't condone this behavior, but the evidence does not show it was done by these individuals."

Young: I will move to refile charges against Franklin Alcantara and Cameron Laurendau. We have video as explained by Det. Gunter, of Mr. Laurendau inside the building."

But minutes later, outside the courtroom, defendants, family members, and supporters celebrated with smiles all around. While seven are still charged with felony conspiracy to trespass and vandalism as well as misdemeanor charges, the news for the remaining defendants is very good. Unless the police and DA come up with some new evidence that they haven't uncovered in nearly five months after the occupation of the vacant bank building, chances are poor that Young can get a conviction.

Those wishing to sign the petition to Free the Santa Cruz Eleven are invited to do so at santacruzeleven.org 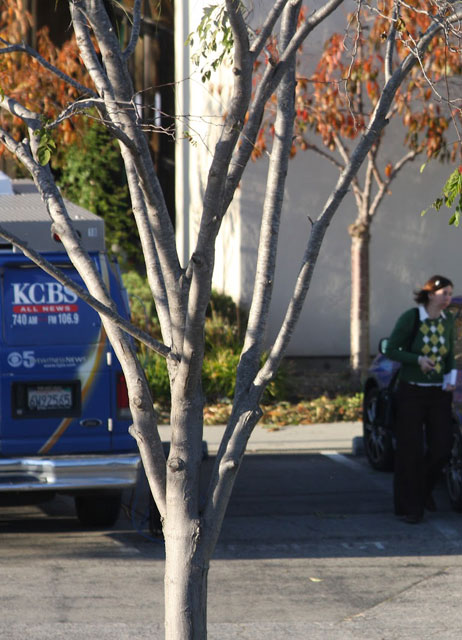 SCPD police evidence photo of SENTINEL reporter, Jessica Pasko photographed parking on the property and walking to get her story on December 1st at 75 River Street. Pasko was not charged.
END_OF_DOCUMENT_TOKEN_TO_BE_REPLACED
§SCPD photo
by via Becky Johnson 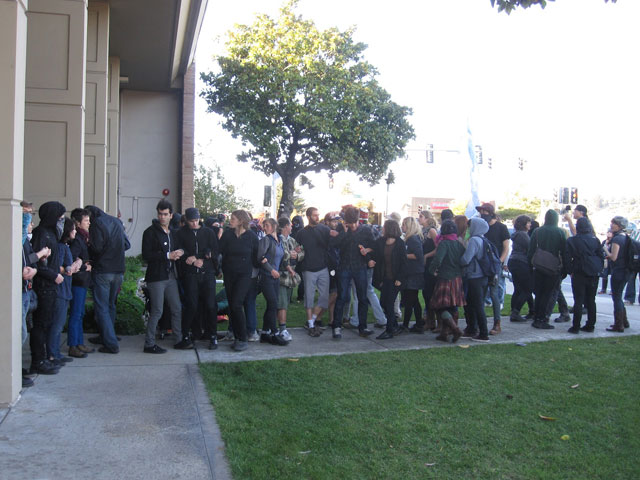 SCPD evidence photo of protesters, some with arms locked, standing together outside 75 River Street on November 30th. Photo is time stamped at 4:24PM, more than 3 hours before police testimony that protesters were warned they were trespassing and must leave or be arrested.
END_OF_DOCUMENT_TOKEN_TO_BE_REPLACED
§Linda Lemaster
by via Becky Johnson 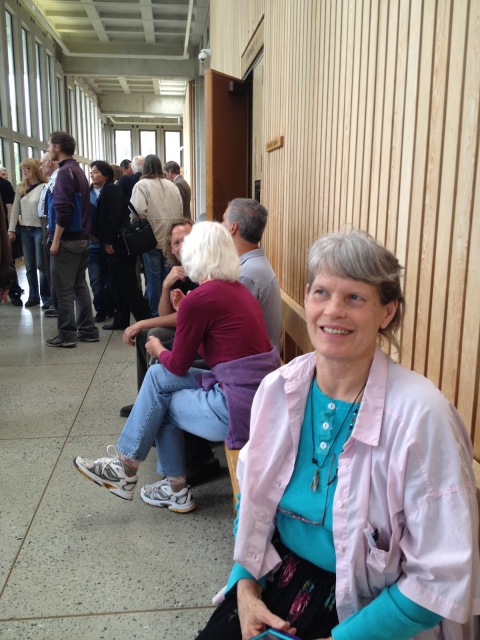 original image (1200x1600)
Linda Lemaster celebrates the dismissal of charges against Franklin "Angel" Alcantara, Grant Wilson, Cameron Laurendau, and Edward Rector by Judge Paul Burdick on April 25th.
Photo by Becky Johnson
END_OF_DOCUMENT_TOKEN_TO_BE_REPLACED
Add Your Comments
Latest Comments
Listed below are the latest comments about this post.
These comments are submitted anonymously by website visitors.
TITLE
AUTHOR
DATE
Bob Lee has lost so much respect, it’s plain embarrassing. And for what??
Bruce Bratton
Precisely why there is a need to Fire District Attorney Bob Lee!
G
Bob Lee
Dan
More Legible Version of My Response to Becky's Excellent Article
Robert Norse
Initial victories
maria
Support Independent Media
We are 100% volunteer and depend on your participation to sustain our efforts!