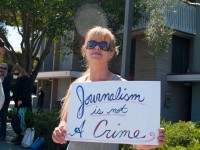 On April 4th, a dozen people demonstrated on the sidewalk in front of the Wells Fargo Bank located at 74 River St. in downtown Santa Cruz, and across the street from the vacant bank building at 75 River St.

The event was held to "encourage those victimized by the bank to learn they have allies", according to an announcement published on Santa Cruz Indymedia that morning.

The demonstration was also called to "support the hundreds of people who visited or protested the vacant building at 75 River St. in late November and early December last year." The announcement asserts that Santa Cruz County District Attorney Bob Lee "has selectively chosen 11 people" for prosecution, including journalists and activists, "in a case of political targeting previously unknown in Santa Cruz."