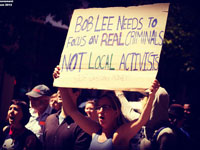 Robert Norse reports: Seven defendants (two were recharged) now face an upcoming Preliminary Hearing sometime in June thanks to Santa Cruz County District Attorneys Bob Lee and Rebekah Young. The seven are activists and reporters selected out of hundreds who passed through the vacant Wells Fargo bank building (now surrounded with a fence and barbed wire) at River and Water Streets in downtown Santa Cruz.

On May 25th Judge Stephen Sillman, standing in for Judge Burdick with cases moved to Dept. 7, first unexpectedly issued arrest warrants for Cameron Laurendeau and Franklin (“Angel”) Alcantara. Neither they nor their attorneys had been effectively advised that D.A. Young had refiled all the bogus charges. When Angel showed up later, the judge recalled his warrant.

Brent Adams successfully got another court-appointed lawyer — J. J. Hamlyn — who is likely to be better than Ryan Murphy. The appointment, however, won’t be active for another week. The Public Defenders and Alternate Public Defenders who have covered most of the 11, have with a few honorable exceptions, not been terribly interested in much prep, pre-hearing communication with defendants or other lawyers, and making any pre-hearing motions that might discourage or quell this witch-hunt. This is typical of the Santa Cruz courtroom process where plea-bargains and last-minute conferences in the hall are S.O.P. [standard operating procedure].