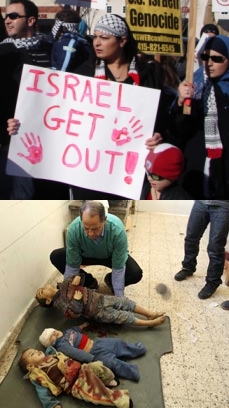 On Saturday January 3rd, Israel confirmed its troops have entered the Gaza Strip as attacks on Gaza entered their eighth day. Tanks moved into the besieged Gaza Strip though Beit Hanoun crossing shortly after nightfall on Saturday. Power lines have been cut throughout Gaza, and all of Gaza is now without electricity.

In the days before the ground assault, Israel intensified air and artillery attacks. At least 13 people were killed when a missile struck a crowded mosque in Beit Lahiya; more than 200 people had been inside the Ibrahim al-Maqadna mosque for evening prayers when it was struck and at least 50 were wounded in the attack. On Friday, January 2nd, Israel allowed between 350 and 450 foreigners to leave Gaza, but for most Palestinians the borders are closed and 1.6 million people are unable to escape the increasingly deadly Israeli attacks.

As protests occur around the world and many world leaders denounce the massacre, the US has blocked even a basic UN statement condemning civilian deaths and US politicians like NY mayor Bloomberg and Democratic Congressman Gary Ackerman have flown to Israel to show their support for Israel's actions. While polls show that the US public is divided in their views on Israel's attack, US politicians in both major parties are almost all united behind Israel. President-elect Obama is refusing to talk about world events until he gets elected but statements from his advisers suggest his stance will be very similar to that of Bush.

Photos: 1 | 2 | 3 | 4 | 5 | 6 | 7 | 8
In San Francisco, on Monday January 5th, a thousand protesters marched from Market and Montgomery to the Federal Building, demanding that Israel halt its invasion of Gaza. A small delegation attempted to enter the Federal Building to deliver a message asking the US government to stop supporting the Israeli military.

DN: A Debate On Israel's Invasion of Gaza |