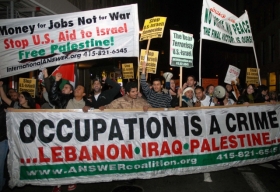 In San Francisco, a protest against the attack on Gaza took place on December 28th at Powell and Market at 12pm.

On Monday, December 29th, there was a protest at Senator Feinstein's office at 5pm, and around 5:30pm, hundreds of protesters took over the intersection of Montgomery and Market to protest the Gaza massacre. Slightly before 6:30pm, police ordered protesters to clear the intersection, but the crowed refused. 30-50 members of a Jewish anti-occupation activist group sat down in the streets in an act of civil disobedience. After over an hour of threats, nobody was arrested and at 7:25pm everyone marched to Union Square and then to Powell and Market.

On Monday, December 29th, there was also a Gaza protest in San Mateo. Representatives from the Youth Leadership Institute, World Can't Wait, San Mateo Peace Action, and Raging Grannies Action League were joined by individuals and a family of Algerian origin. In total about 25 people showed up on short notice for the emergency rally at the corner of 4th and El Camino Real.

On Tuesday, December 30th, there was a protest at the Israeli Consulate in San Francisco, as part of a National Day of Action against the attacks on Gaza. Thousands of protesters gathered in front of the Israeli Consulate in San Francisco starting at 5pm. At around 6:15pm the crowd started marching towards Market St. and the crowd filled Market Street as they marched towards Civic Center. Protesters then Marched up Van Ness Ave and then marched back towards Market St.
Breaking Coverage |

Sacramento also joined cities throughout the nation and world in the Day of Action to protest the Israeli massacre in Gaza. The Sacramento protest was at 4pm at 16th and J Streets.

On Friday, January 2nd, protesters gathered at Powell and Market at 2:30pm and marched to the Israeli consulate.

There were also protests Friday in Sacramento (

Indymedia Reports On Protests Around The US:

Boston Indymedia: Protests in Boston Against Israel's Attacks on Gaza | Local Actions in Solidarity with Gaza | Banner Drop Over Storrow Drive in Support of Palestinians

Other Acts Of Protest:

Indybay coverage of the attack on Gaza