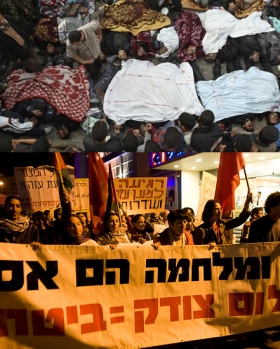 Egypt has opened the Rafah crossing at its border with Gaza to receive wounded Palestinians. The Egyptian government's cooperation with Israel's blockade of Gaza has been very unpopular among Egyptians and Hamas has suggested that ending such cooperation could be a main focus of its response. Hamas leader Ismail Haniyeh said on Saturday: "The simplest response to the massacre today is to reopen Rafah crossing once and for all. I tell our Arab brothers that the simplest response to the massacre is to end the siege." Exiled Hamas leader Khaled Meshaal called on Saturday for Palestinians to wage a new intifada against Israel, including a return to suicide missions.

Protests against the Israeli bombing and invasion are taking place across the Middle-East and Palestine. In Tel-Aviv Hundreds of Arabs and Jews took to the streets to protest the massacre in Gaza yelling “no one can tell us that this massacre is suppose to protect us.” The Israeli police attacked the protesters and six people were detained. The Higher Arab Monitoring Committee, an umbrella group of Arab organizations, declared a national strike and a mourning day in the Arab sector beginning Sunday morning.

On Sunday, Israel kept up its bombing of civilian infrastructure during the day and mobilized its ground troops to prepare to enter Gaza. Demonstrations calling on Israel to stop the massacre took place all over the world. In Europe, demonstrations were held in London and Madrid in front of Israeli embassies. In occupied Palestine, Israeli soldiers opened fire on a demonstration in Ni'lin, killing one protester and critically wounding another. In Jaffa, activists and residents held sign and march on Yefet St.

Indybay coverage of local protests against the Gaza massacre

Coverage of the massacre:

DN: Over 310 in Gaza in One of Israel's Bloodiest Attacks on Palestinians Since 1948 | Ali Abunimah: "We have no words left" | Gaza death toll tops 300 as Israel vows to fight to bitter end | Robert FIsk: Leaders lie, civilians die, and lessons of history are ignored | "Shabbat Shalom" in Gaza | Stench of Death Hangs Over Gaza | "The amount of death and destruction is inconceivable" | Update From Palestine Watch | Vicious folly of a bankrupt government | The war in Gaza – vicious folly of a bankrupt government | Scores dead in Israeli raid on Gaza | Palestine Watch:Gaza Massacre!

International Response: Iraq's Sistani Calls for Action on Behalf of Gaza | Israel, Gaza and the usual free pass | Egypt recalls ambassador after "murder" in Gaza | US Blames Bloodshed on Hamas

Inside Israel: Shalit Reportedly Wounded in Israeli Strike | With Gaza raid, Barak is back in the political ring