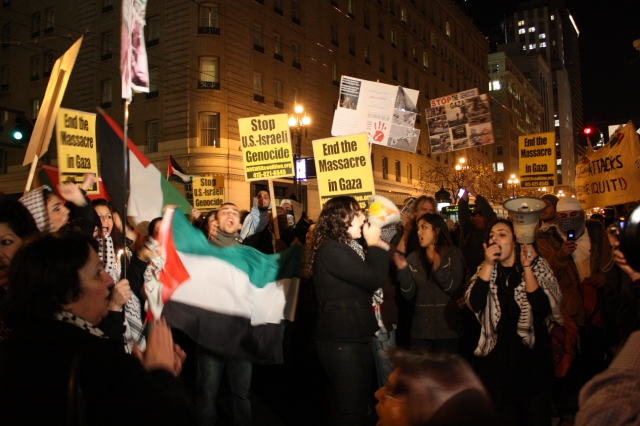 original image (4272x2848)
Palestine supporters gathered last night in San Francisco for the second of three scheduled protests against Apartheid Israel’s escalating attacks on Gaza. Like Sunday’s kickoff protest, Arab youth, mostly women, rallied the crowd calling for Boycott, Sanctions and Divestment from the Apartheid state and an end to US support for 60 years of Israeli occupation and ethnic cleansing. The crowd of about 500 was diverse. Elders, youth and families mingled, shared signs and helped those with disabilities through the crowd. Old friend’s hugged each other and new faces peered past candles and homemade signs calling for an end to genocide against the Palestinian people, an end to occupation and end to the billions in US tax dollars that fund these war crimes.

Co-sponsored by a diverse group of organizations including Queers Undermining Israeli Terrorism, Direct Action To Stop the War, the International Jewish Anti Zionist Network, Women in Black and the Middle East Children’s Alliance, the candlelight vigil/direct action/impromptu snake march through Union Square brought evening traffic to a standstill for 2 hours. Despite powerful chants and the incredibly high energy of the youth, the mood was still somber. Conversation among participants never strayed far from what was happening in Gaza and what the next few days would bring the besieged people.

By the time the last of the protesters left the streets, Israel was well into its fourth day of bombing raids across Gaza and the death toll continues to climb. So far, 360 Palestinians have been killed. Universities, pharmacies, schools, police stations and government offices have been hit. Gaza is the most densely populated strip of land on earth and with each passing day, more and more civilians, many of them children, are among the dead. Hospitals already crippled by the two-year economic siege imposed by Israel are stretched beyond capacity working with little or no medicine, clean water or electricity. The dead are being piled up outside the hospitals for lack of morgue space and families are searching the streets and clinics for loved ones. What little aid has squeaked through clandestine channels over the last few days has all but dried up.

Despite the Internet’s barrage of international coverage, the outrage on streets across the planet and the devastating eyewitness reporting from Gaza, the corporate and Left Zionist media still regurgitate Israel’s defense propaganda, printing the racist and warmongering language of the Israeli officials. President Elect Barack Obama, still on holiday in Hawaii, again had no statement on Israel’s genocidal attack. His press team made it clear that until inauguration day George Bush was still the president and any action on the issue of Gaza was the call of his administration alone.

This is the story of Palestine caught between two of the most belligerent and criminal states in the world, the US and Israel, and two of the most belligerent political parties in history, the Democrats and the Republicans. All US presidential candidates talk big when it comes to election year and Israel. This “will be the year for Middle East peace”, they say. When it comes right down to it however, continuity in the service of imperialism and its allies is the name of the game, not change and certainly not justice. This was absolutely clear to everyone on the streets last night. 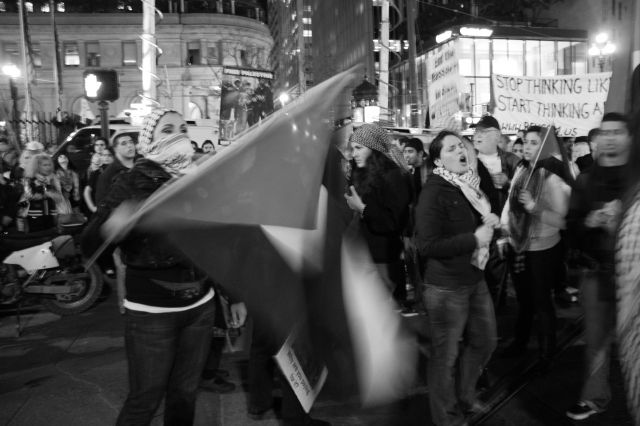 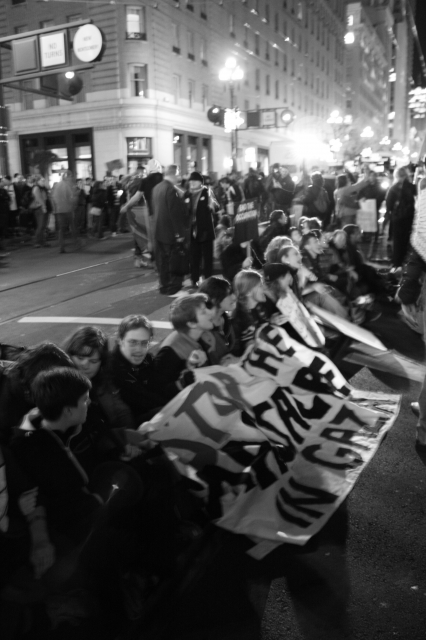 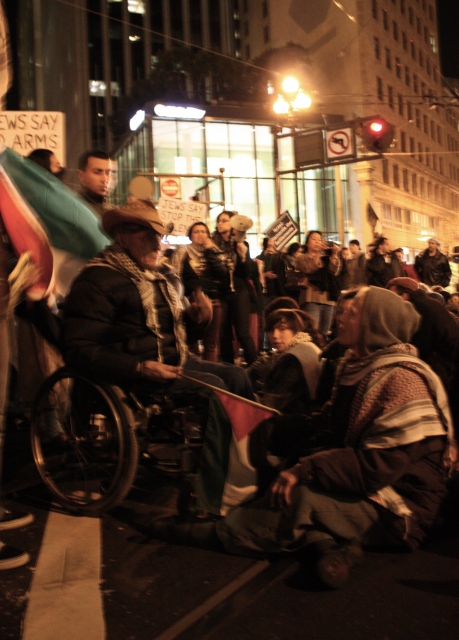 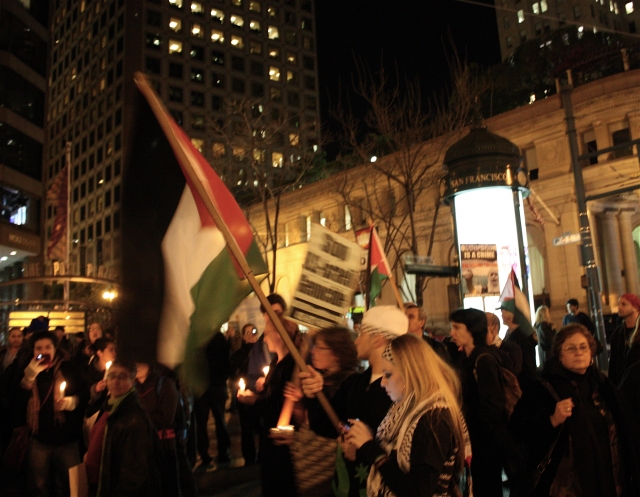 original image (3452x2683)
Present throughout the action was the Palestinian flag. It was carried by couples, youth, children, moms and dads.
§Not stand down
by Uda Olabarria Walker Tuesday Dec 30th, 2008 12:39 PM 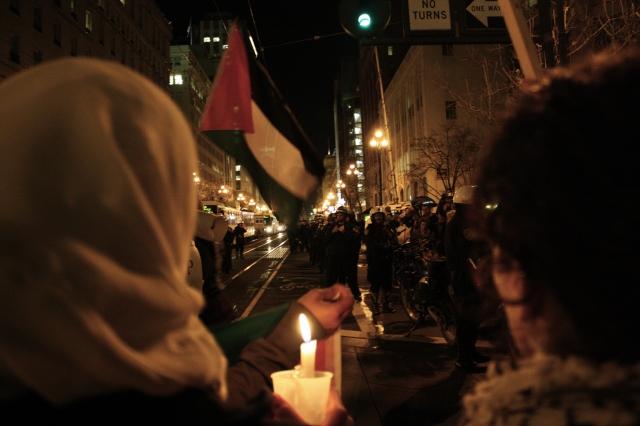 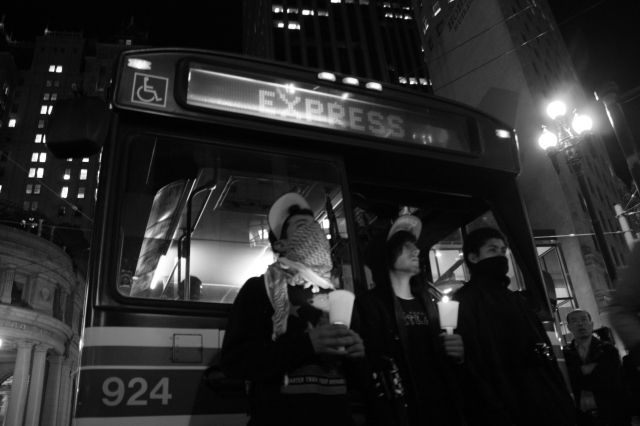 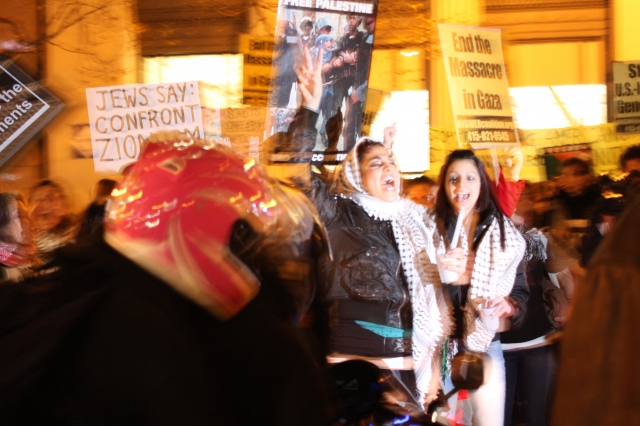 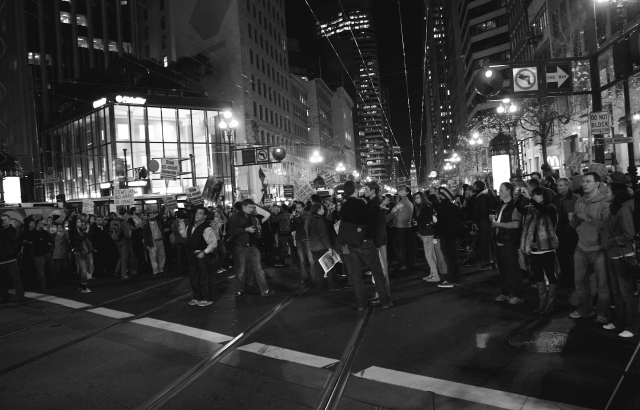 original image (4142x2657)
After the call to take the street, folks streamed in and took their place. It was a mix of media, activists, onlookers and a few confused shoppers.
§Vigil
by Uda Olabarria Walker Tuesday Dec 30th, 2008 12:39 PM 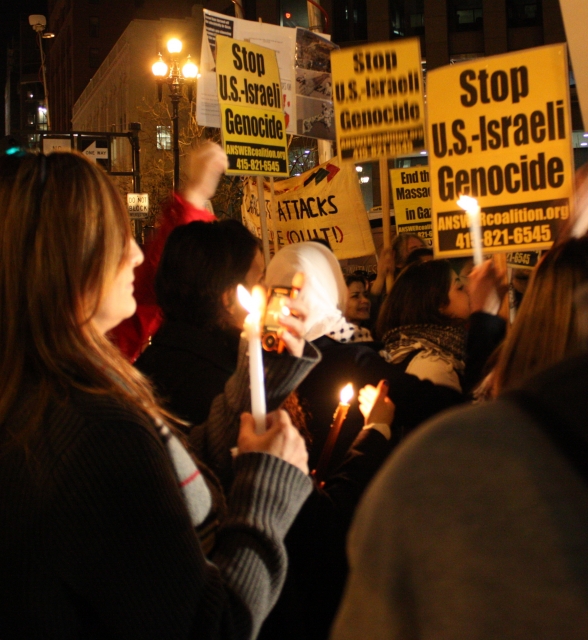 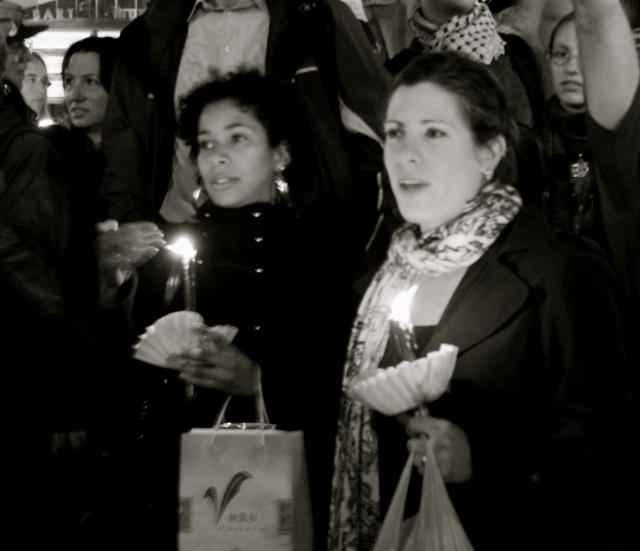 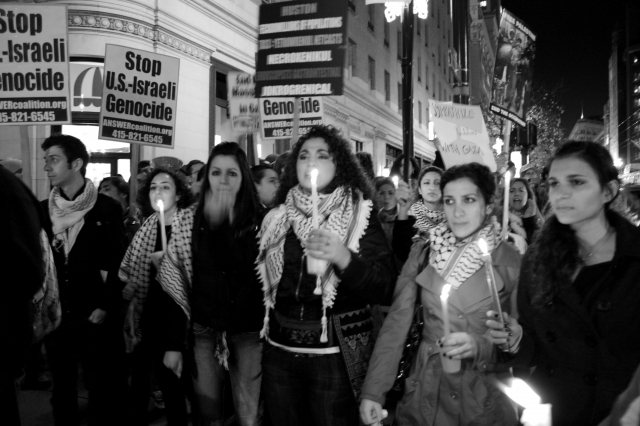 original image (4272x2848)
These women were part of the youth that carried the action through the night.
§Mothers and Grandmothers
by Uda Olabarria Walker Tuesday Dec 30th, 2008 12:39 PM 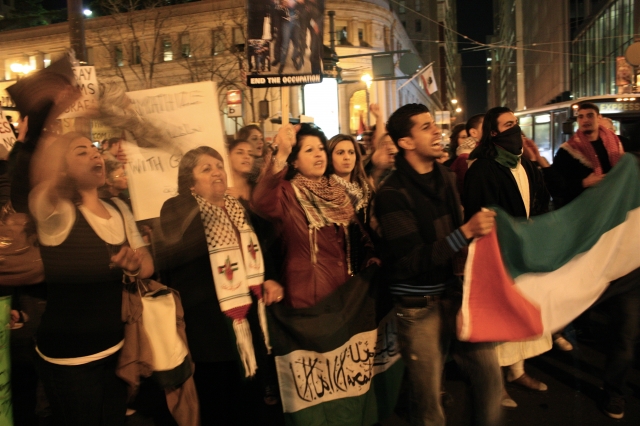 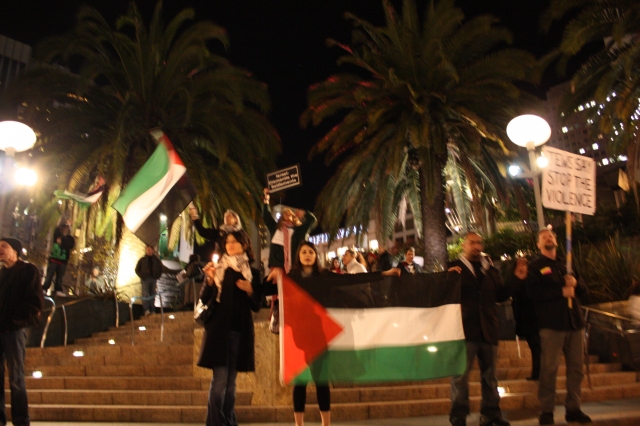 original image (4272x2848)
The Arab youth led the protest on a march to Union Square reminding shoppers and tourists that they shop while Gazans die.
Add Your Comments
Support Independent Media
We are 100% volunteer and depend on your participation to sustain our efforts!