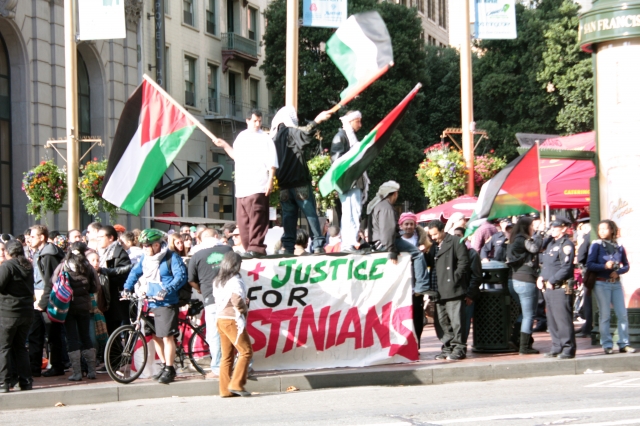 original image (4272x2848)
As the death toll in the Gaza strip rose today with the second round of Israeli bombing, 300 activists and families gathered Sunday in downtown SF to protest the attacks and urge popular support for the people of Palestine.

Organized by the Arab Organizing and Resource Center (AROC) the emergency action set into motion three days of protest. Arab and solidarity activists spoke to the crowd about the current and past situation on the ground in Gaza and spoken word artists made connections between Palestinian and other indigenous struggles against genocide as well as the complicity of US tax payers in the atrocity. As the protest wrapped up in the afternoon, organizers relayed the news that Israeli troops were massing at the border with Gaza for a ground assault against the 25-mile long strip of land that is home to 1.5 million Palestinians. So far, more than 300 Palestinians have died in the bombing raids and with many more bodies still being pulled from the rubble.

The Gaza Strip has been under Israeli occupation for 41 years and in that time Israel has worked to confine the population into an open- air prison. In 2006, Hamas won a stunning victory in the Palestinians elections catching Israel and its US allies by surprise. In response to the democratic election of Hamas, the US and Israel backed a soft coup led by US and Israeli allied members of the Palestinian Authority which currently rule illegally in the Occupied West Bank. When this failed to topple Hamas, Israel moved swiftly to contain the Hamas leadership by hermetically sealing off Gaza. For the past three years, and with the support of the US and the European Union, Israel has slowly cut off Gaza's lifeline including, electricity, fuel, water and denying humanitarian aid shipments prompting the UN officials to openly declare a Gaza a humanitarian catastrophe. Despite a six month ceasefire between Hamas and Israel this past year, Israel continued to kill Hamas activists and continued to use deadly collective punishment measures to pressure Palestinians. In response, Hamas two weeks ago called off the ceasefire and resumed its resistance activities. Israel has vowed to used the full might of it's military to
"defend" itself and the US has obligingly condoned the Apartheid state's actions.

President Elect Barack Obama has not issued a formal statement from his vacation retreat in Hawaii but during his 2008 campaign he pledged a further $30 Billion in US tax dollars for Israel citing the US' special relationship with the Apartheid State.

There are two more protests this week, Monday Dec. 29th at 5 pm at Montgomery and Market and on Tuesday Dec. 30 at 5pm at the Israeli Consulate, 456 Montgomery St. 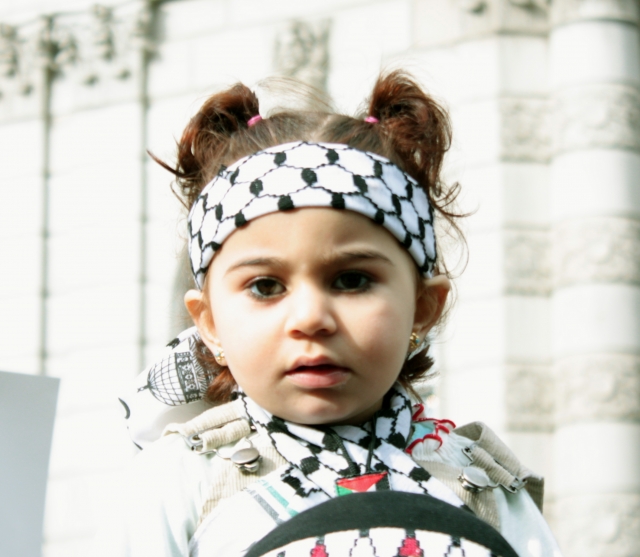 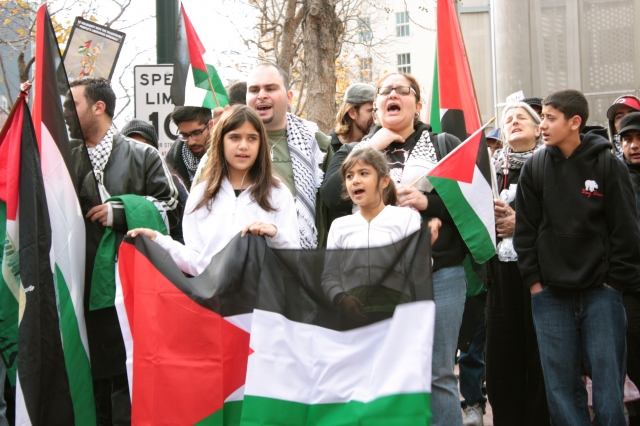 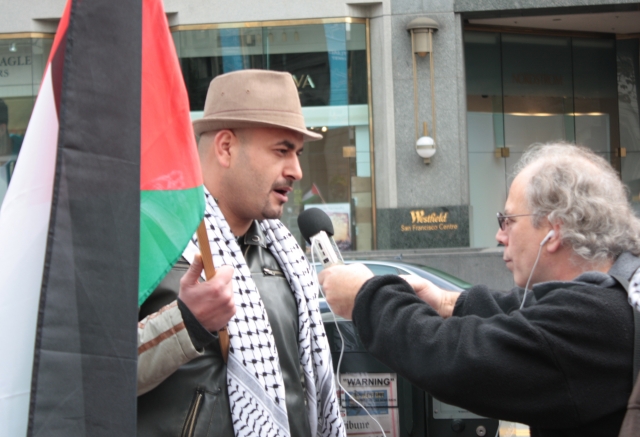 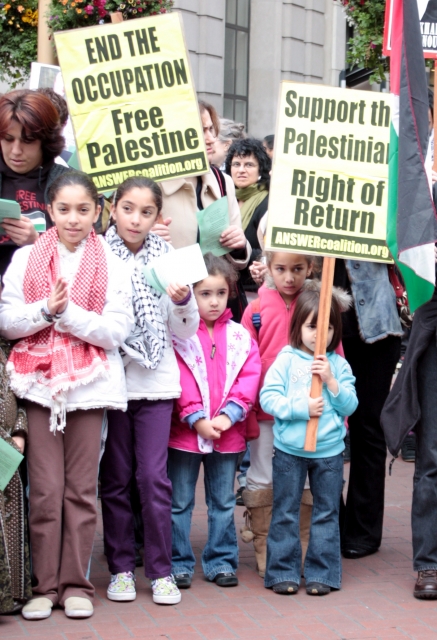 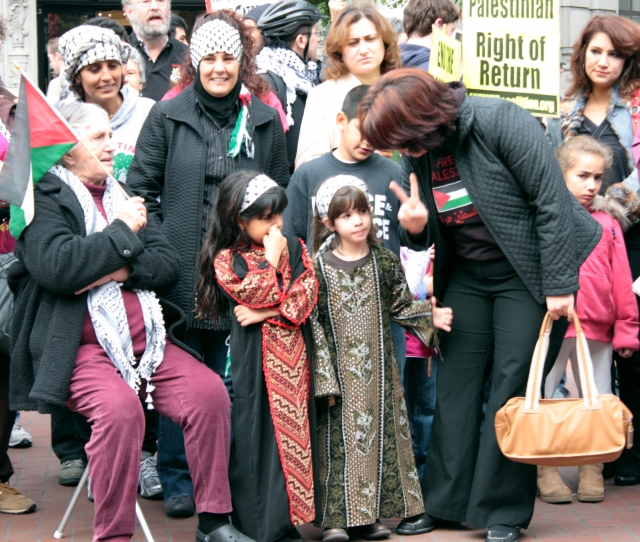 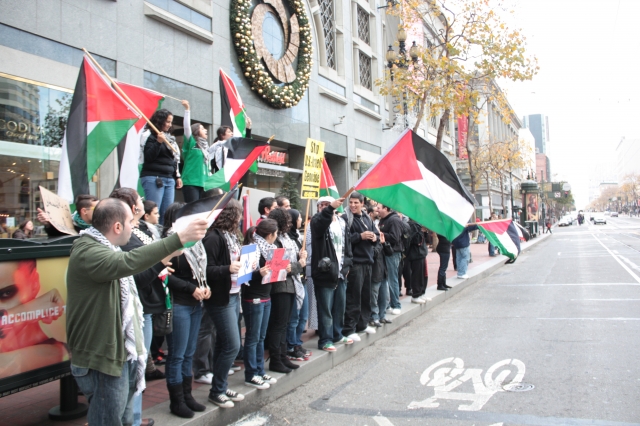 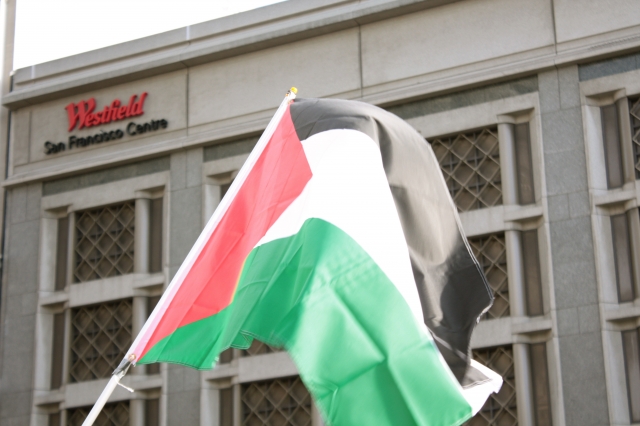 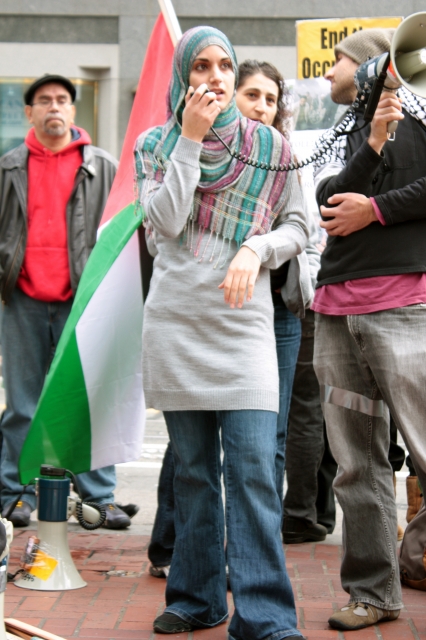 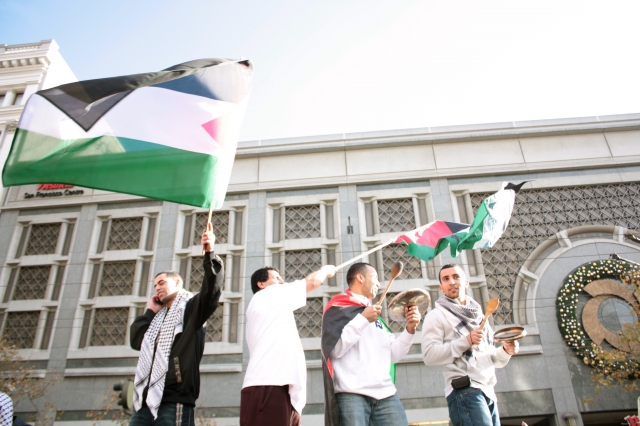 original image (4272x2848)
The youth voice carries above the crowd.
Add Your Comments
LATEST COMMENTS ABOUT THIS ARTICLE
Listed below are the latest comments about this post.
These comments are submitted anonymously by website visitors.