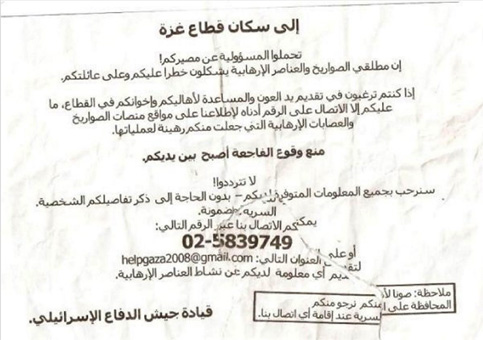 One such flyer, an image of which was sent to The Electronic Intifada, seeks to recruit Palestinian collaborators. Signed by the "Israel Defense Forces command," and addressed to the "the residents of the Gaza Strip," the flyer states: "You hold the responsibility for your own fate!" It invites Palestinians to call or email the Israeli army "to inform us about the location of rocket launching sites and the terrorist gangs that made you hostages of their actions." Because collaboration with an occupier is universally viewed as one of the worst forms of betrayal, the flyer warns "For your own safety, please maintain secrecy when you call us."

EI decided to call the number provided. What follows is a translation of the Arabic conversation between an EI editor and an Israeli officer who identifed himself using the Arabic name "Abu Ibrahim."

Israel has used cash, but has sometimes attempted to blackmail desperately sick Palestinians by witholding access to medical care unless they collaborate. Israel may also hope that the humanitarian catastrophe it has deliberately created in the Gaza Strip will make Palestinians more vulnerable to this kind of exploitation.

Listen To Audio or Read Transcript:
http://electronicintifada.net/v2/article10114.shtml
Add Your Comments
LATEST COMMENTS ABOUT THIS ARTICLE
Listed below are the latest comments about this post.
These comments are submitted anonymously by website visitors.