Add an Event
Newswire
Calendar
Features
Home
Donate
From the Open-Publishing Calendar
From the Open-Publishing Newswire
Indybay Feature
Publish to Newswire
Add an Event
Related Categories: Palestine | California
Urgent: Occupation begins ground invasion of Gaza, resistance committed to victory
by PFLP - repost
Saturday Jan 3rd, 2009 1:09 PM
The occupation forces began their ground invasion of Gaza on January 3, 2008. The occupation forces entered Gaza in several places at approximately 9 PM, while continuing their shelling and targeting of Palestinians from air and sea, killing and wounding still more of our people while their ground forces prevent ambulances and medical personnel from reaching the victims. All Israeli (and US-made) weapons are being used in this invasion, including massive bombs. The occupation forces have bombed the small remaining oil supply used for power in Gaza, cutting 85% of electricity in Gaza and creating massive clouds of thick, toxic smoke. 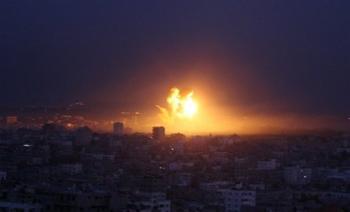 This oil has been used to power hospitals, ambulances and other emergency services for our people. The criminality of the occupier knows no bounds and is continuing and escalating after a week of onslaught against our besieged people in Gaza.

The Popular Front for the Liberation of Palestine and the entire Palestinian resistance and the whole of the Palestinian people is committed to confront the occupier in the face of the Israeli massacres, ground invasions and crimes. We are calling upon people around the world to occupy and take over Israeli, U.S. and Egyptian embassies and consulates around the world. We are confident of the steadfastness of our resistance and the masses of our people. Not one single Palestinian will be defeated in Gaza. We are all in this fight together, men, women, elderly, children, youth, popular resistance, medical workers, fighters, and leaders - we all stand together in fierce, defiant and confident confrontation of the occupier and its crimes, and certain that we are on the march to victory.
http://www.pflp.ps/english/
§The Popular Front for the Liberation of Palesitne
by PFLP - repost Saturday Jan 3rd, 2009 1:09 PM

http://www.pflp.ps/english/
Add Your Comments
LATEST COMMENTS ABOUT THIS ARTICLE
Listed below are the latest comments about this post.
These comments are submitted anonymously by website visitors.