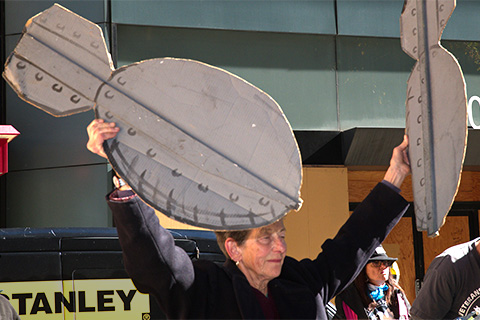 It has been 60 years since the Cuban Missile Crisis, and now may be the closest the world has been to a nuclear war since then. In October, anti-war activists in the San Francisco Bay Area and Central Valley joined others across the nation in holding street protests to demand that their elected leaders take a stand and work to reduce the risk of nuclear war. On November 10, Youth vs Apocalypse, CodePink, Veterans for Peace and others rallied in front of weapons manufacturer Lockheed Martin's San Francisco office, where they created a street mural with the message "Defund Violence."

Defund Nuclear Defense, organizer of the October national action wrote: "Very few members of the House and Senate have risen to the occasion by speaking out and working for measures to de-escalate tensions between nuclear powers. Nor have many of them devoted serious effort to reviving negotiations for nuclear-weapons treaties and disarmament measures."