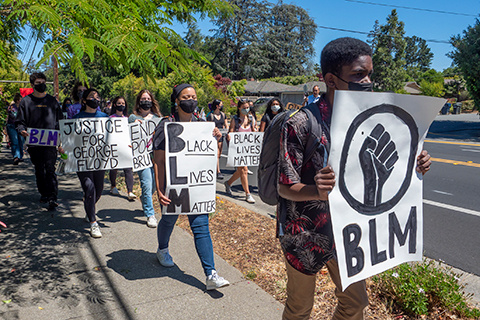 On May 25, Bay Area activists held a range of actions to mark the one year anniversary of George Floyd's death and the subsequent global uprising against racial injustice and police brutality. In Mill Valley, people gathering at an evening-hour vigil laid tributes of flowers and candles plaza in the downtown plaza. Meanwhile in Oakland, the Anti Police-Terror Project and the Defund Police Coalition held a press conference calling on City Council Members to follow through on their agreement to defund the Oakland Police Department and reinvest in community services.

Los Altos youth group Justice Vanguard organized a mile march from their high school to a busy intersection where students and community members spilled into the street, blocked traffic and rallied on the busy El Camino Real. At this San Francisco Peninsula location, passersby chorused back their solidarity and drivers got on their horns. The response on the street was similar at a rally in San Francisco’s Fillmore District with added honks from the #22 buses, which passed frequently in two directions. In Santa Cruz the NAACP organized an evening vigil on the city’s courthouse steps.

Related Features: Oakland Marches in Solidarity with Portland's Resistance Against Feds | Largest Juneteenth Demonstrations Ever in the Bay Area and Beyond | Uprisings Explode Across the Country After Murder of George Floyd