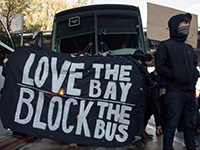 Fighting Back Against the "Tech Takeover"
Impact of Tech Industry Protested with Apple, Google, & Yahoo Bus Blockades and Home Demo

Defend the Bay is an initiative organized to confront "issues of rent, gentrification, surveillance, the police state, real estate development, and the destructive impact of the tech industry on people's daily lives." Defend the Bay Area called for a week of action beginning on March 28.

On April Fool’s Day, a group of people blocked an Apple bus attempting to cross the High Street bridge from the Fruitvale district of Oakland into Alameda. Consequently, a Google bus was also blocked behind it. Another group of people handed out fliers to Google and Apple employees waiting for their delayed bus. The two buses were blocked for half an hour and there were no arrests.

Sup Sub writes of the the High Street bridge blockade: Our action is the opening of a new front in the war against gentrification. We announce that any further incursion into the Fruitvale will not be tolerated. If the employees of Apple or Google attempt to replicate what they did to the Mission here, the backlash will be ten times more potent. Like the Mission, the Fruitvale hosts a large latino population... If you start to displace them once more, do not be surprised when hundreds of people in balaclavas mobilize to displace you.

On the same morning in San Francisco, a Google bus was surrounded at 24th and Valencia streets by dancing activists dressed as clowns, who announced facetiously that regular citizens could now board Google buses for free as part of a "GMuni" program.

The very next day, on April 2, over fifty protesters caused delays and disruptions in the tech bus pick-up zone in front of MacArthur BART in Oakland. An Apple bus, Google bus, and Yahoo bus were all surrounded and blocked for over half an hour until OPD and BART cops pushed the demonstrators off the street. At one point, masked protesters climbed atop the Yahoo bus to the cheers of the crowd.

On April 3, a Google bus was blocked at Center and 7th Street in West Oakland.

On April 6, The Counterforce demonstrated in front of the San Francisco home of Google venture capitalist Kevin Rose. The group demanded that "Google give three billion dollars to an anarchist organization of our choosing" before a revolution occurs that "neither you nor we can control, a revolution that will spread to all of the poor, exploited, and degraded members of this new tech-society and be directed towards you for your bad decisions and irresponsible activities."

Week of action against the destruction of the bay area begins march 28 | DefendtheBayArea.org
April 1: Apple and Google buses blocked in Oakland |

Video of Apple and Google Buses Blocked in Oakland
April 2: