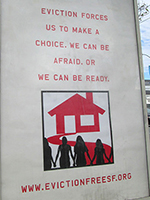 The California Department of Corrections (CDC), which practices culture jamming by "altering California's most criminal advertising", has unveiled a new campaign of bus shelter ads to confront San Francisco’s eviction crisis. On February 11, 2014, the CDC successfully apprehended, rehabilitated and discharged bus shelter advertisements throughout San Francisco. The ads were released into city districts with historically high rates of tenant displacement, including the Fillmore, the Mission and South of Market. One corrected ad sits at Valencia and 24th Street in the Mission District, a neighborhood with the city’s leading eviction rate from 2009 to 2013.

The corrected ads were placed in response to San Francisco’s growing eviction crisis, which has been triggered by a high-tech economic boom and a surging real estate market. According to a 2013 report from the city’s Budget and Legislative Analyst, all types of evictions increased 38% over the past three years with a 170% spike in Ellis Act evictions over the same period. The Ellis Act refers to a California law that gives landlords unchecked power to evict their tenants, remove their properties from the rental market and sell their buildings without occupants.