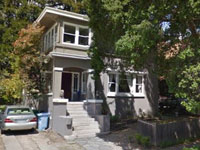 According to an article published on Indybay's newswire, at 7am on January 21, a group of people went to the home of Anthony Levandowski, a Google X developer. After ringing his doorbell to alert him of the protest, a banner was held in front of his house that read "Google's Future Stops Here" and fliers about him were distributed around the neighborhood. The fliers detail his work with the defense industry and his plans to develop luxury condos in Berkeley.

After fliering his neighborhood and blocking his driveway for approximately 45 minutes, the group blocked a Google bus at Ashby BART. This blockade lasted about 30 minutes and dispersed when the Berkeley Police Department arrived. Several conversations took place with Google employees.

the counterforce writes: After previous actions against the Google buses, many critics insisted that the individual Google employees are not to blame. Taking this deeply to heart, we chose to block Anthony Levandowski's personal commute. We also respectfully disagree with this criticism: We don't see one action as better than the other. All of Google's employees should be prevented from getting to work. All surveillance infrastructure should be destroyed. No luxury condos should be built. No one should be displaced.

Previous Indybay Coverage: Anti-Gentrification Bus Blockades Spread to Both Sides of the Bay