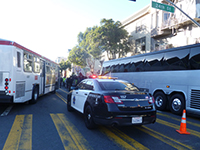 Anti-Gentrification Bus Blockades Spread to Both Sides of the Bay
Google Buses Blocked in Oakland, Apple Bus Blocked in SF to Protest Rising Costs of Living

San Francisco and Oakland residents are being evicted as a result of increasing housing costs caused in part by an influx of tech employees, many of whom are provided private buses by their employers to get to offices in the Silicon Valley. In protest of the rising cost of living and the ongoing displacement of long time residents, anti-gentrification activists first blocked a Google bus in the Mission District of San Francisco on December 9. On December 20, bus blockades spread to both sides of the Bay. Protesters blocked one Google bus at the MacArthur BART station and another on 7th and Adeline in West Oakland. On the same morning in San Francisco, an Apple bus was blocked at 24th and Valencia Streets.

Labor Video Project writes of the December 20 blockade in San Francisco: people threatened with evictions and community and labor activists stopped an Apple bus on 24th St. and Valencia. The police removed the protesters and they then marched to 24th and Mission. This is the second blockade of tech buses that are bringing thousands of new workers into San Francisco.... San Francisco mayor Ed Lee and the Board of Supervisors have given tax subsidies to tech companies such as Twitter and have allowed the use of the MTA Muni bus stops for these tech corporation buses with no enforcement of traffic regulations and fines for illegal use.

Anti-Cyborg Conglomerate writes of the same-day blockades in Oakland: a small group of people met at 7th and Adeline in West Oakland. Down the street, over 20 employees of Google were queued up, waiting for their giant white bus to take them to their Mountain View headquarters.... While they took their seats, several people unfurled two giant banners reading “TECHIES: Your World Is Not Welcome Here” and “FUCK OFF GOOGLE.” ... [One] person appeared from behind the bus and quickly smashed the whole of the rear window.... The Google bus was an obvious target, but obviously the situation is more complex than one corporation and its specific employees. Gentrification is a dynamic and nuanced problem that is only beginning to be addressed and alleviated. It has many layers, players, and levels which undoubtedly will be exposed and elucidated in the near future by numerous individuals and groups.