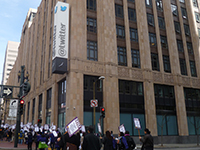 On February 12, SEIU 1021 city workers marched and protested at Twitter corporate headquarters in San Francisco. The theme was “End Twitter Tax Breaks; Improve Healthcare, Housing, Transportation and Education”. One picket sign read, “Affordable Health Care Or Sweetheart Deals for Twitter?” The Service Employees International Union rally started at the corner of Van Ness and Market, and then proceeded down Market Street to continue in front of Twitter headquarters. San Francisco Supervisors Campos and Avalos were main speakers along with several union workers and representatives.

SEIU 1021 workers demanded an end to tax subsidies and the defense of their healthcare benefits. Under previous ballot propositions supported by San Francisco labor leaders, city workers are paying substantially more for their healthcare and pension benefits, cutting their real wages. If Twitter had paid fair taxes, the cuts could have been avoided. Many of SEIU 1021 workers are angry about their declining income while Mayor Ed Lee is giving hundreds of millions of dollars in tax subsidies to billionaires and their tech corporations and $11.5 million to Oracle billionaire Larry Ellison's Americas Cup.