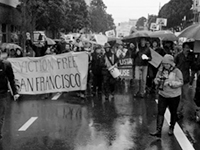 On February 26, about 150 tenants and community supporters, including Eviction Free San Francisco, rallied at 24th/Mission BART Plaza for a “March On Greed” to the office of serial evictor Kaushik Dattani to support long-time San Francisco tenants and roommates Patricia Kerman’s and Tom Rapp’s campaign to resist their Ellis Act eviction. The BLO then led a march to Patricia’s and Tom’s landlord’s office. The crowd encountered two SFPD officers guarding the shuttered entrance to the office in order to prevent any direct appeals to Dattani personally to rescind the eviction. In December, at an earlier event, people from Dattani’s office brandished baseball bats in order to intimidate the residents’ efforts to make a similar appeal.

The rally, march, and protest was the latest in a growing number of grassroots events responding to the rapid pace of evictions and gentrification during this latest real estate boom. Eviction Free San Francisco is an entirely volunteer organization of tenants and their supporters using mutual aid and direct action to resist evictions and preserve our homes.