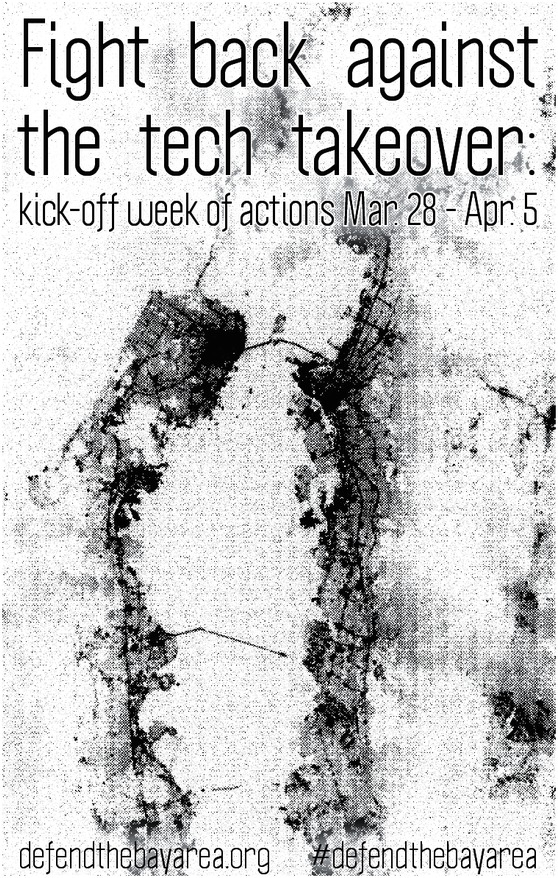 Download PDF (8.7MB)
We find ourselves in the middle of a war. Not everybody knows they are part of it. Sometimes it just looks like a new gated building. Sometimes it just looks like a pair of ugly Google glasses. Most often it looks like people and communities desperately figuring how to hold on, how to live in a city, in a neighborhood, that more and more pushes them out. In any case, this war is now visible everywhere. Anger at the tech industry and its disastrous effects on the Bay Area is a daily news story. This anger is about more than big tech companies and their free buses, about more than rich people with their wearable technology. Every day we hear about another displaced family, another person whose rent has doubled, another racist development plan, another project to surveil and control the population of the Bay Area in order to make it safer for the monied classes.

We are opposed to their notions of "progress," to the dim "future" that these developers and tech companies offer us. But this struggle is really about what's happening right now, the terrible future that is already here. It is a struggle about time and space in the here and now. How many hours of your life do you work each week to pay the new rent, if you can even find a job? How many minutes of the day are you free from surveillance? How long can you afford to stay in the city? How many generations of history are being erased in West Oakland, the Mission and the Bayview? The effects of this takeover cascade from one end of the Bay Area to the other, endlessly pushing people out. Who gets to live here? Who has to sleep five to a room? Who has space? No wonder people are angry. No wonder the war keeps bursting forth.

We want to aid in the escalation and expression of this anger, and give people a chance to work together to resist what is happening in San Francisco, in Oakland, and beyond. People are already taking action; we are excited to help as it becomes more frequent and focused. The significance of this moment is that all sorts of people with all sorts of perspectives and politics are pissed off. We may not agree on everything, and we may not have the exact same priorities, but we can and should share ideas and coordinate our resistance in order to cause the most damage to our common enemies. We are issuing a call for all individuals and groups that are concerned with issues of rent, gentrification, surveillance, the police state, development and the destructive implications of the tech industry to begin a systematic campaign starting on March 28. We will use this website, Defend the Bay Area, to allow people to plan and coordinate actions, assemblies, marches, and other events during that week and beyond. Think about what you might do during that week -- with your friends, your affinity group, in your workplaces or communities. If it's something that can be publicized, contact us and we'll help spread the word.

More information about events planned that week will appear shortly. We are also interested in publishing original writing about these issues. 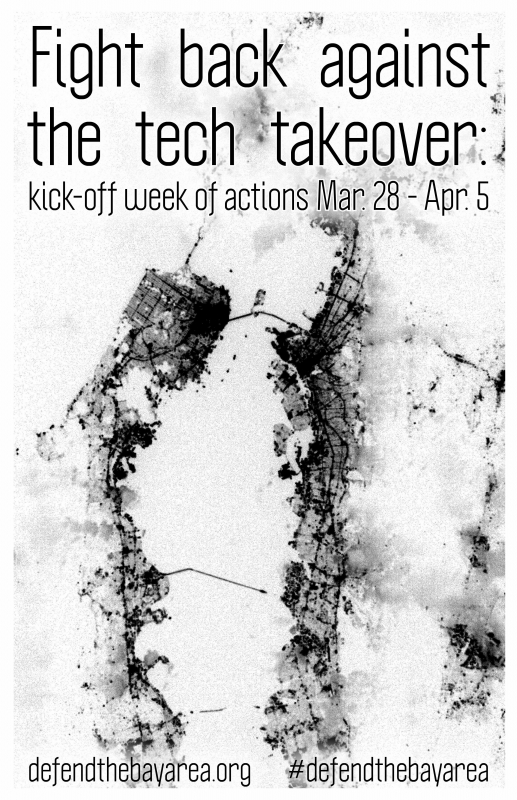 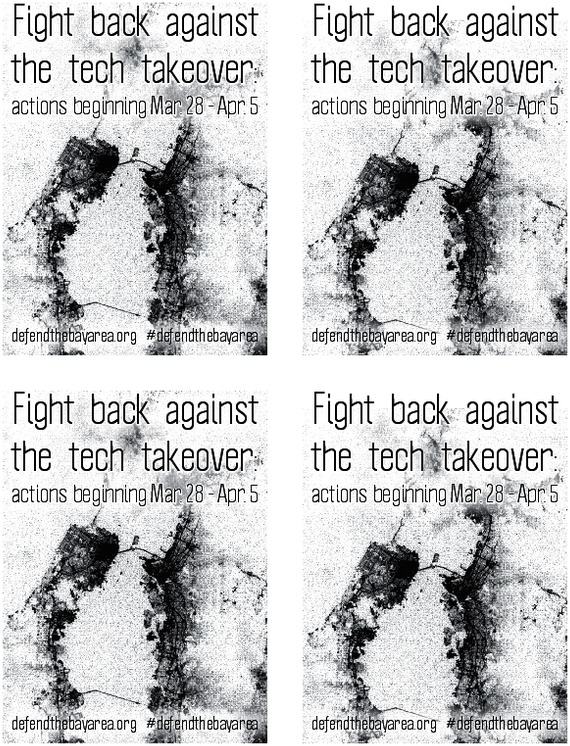 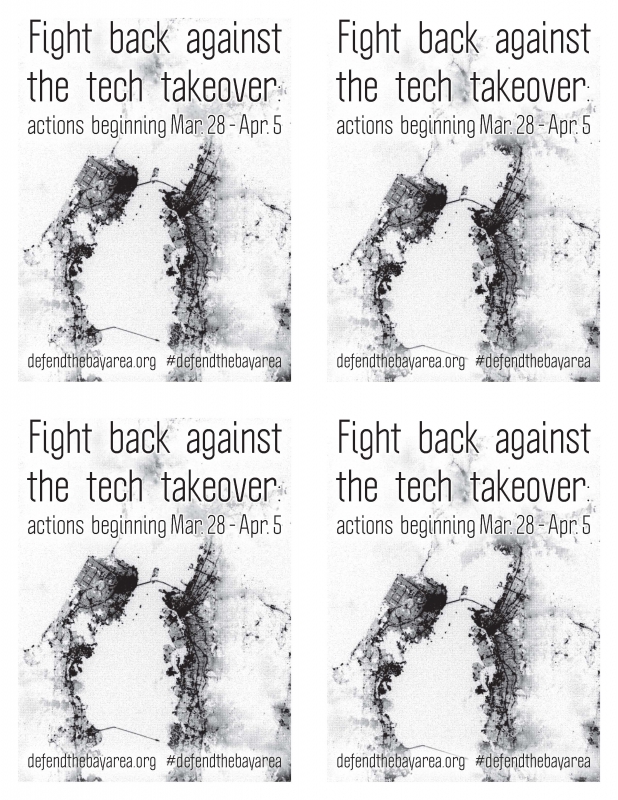 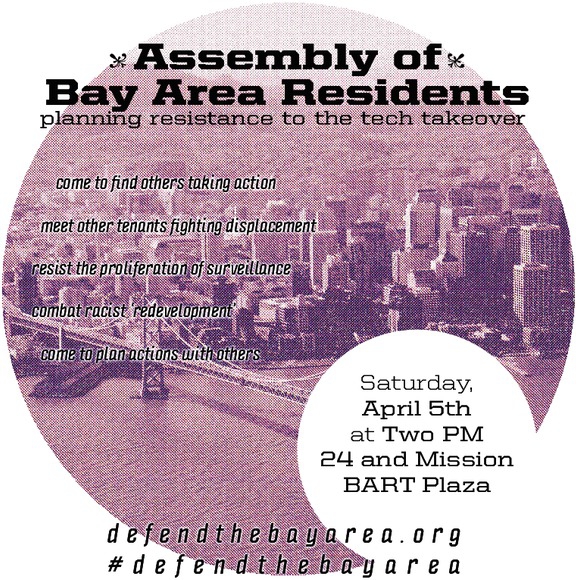 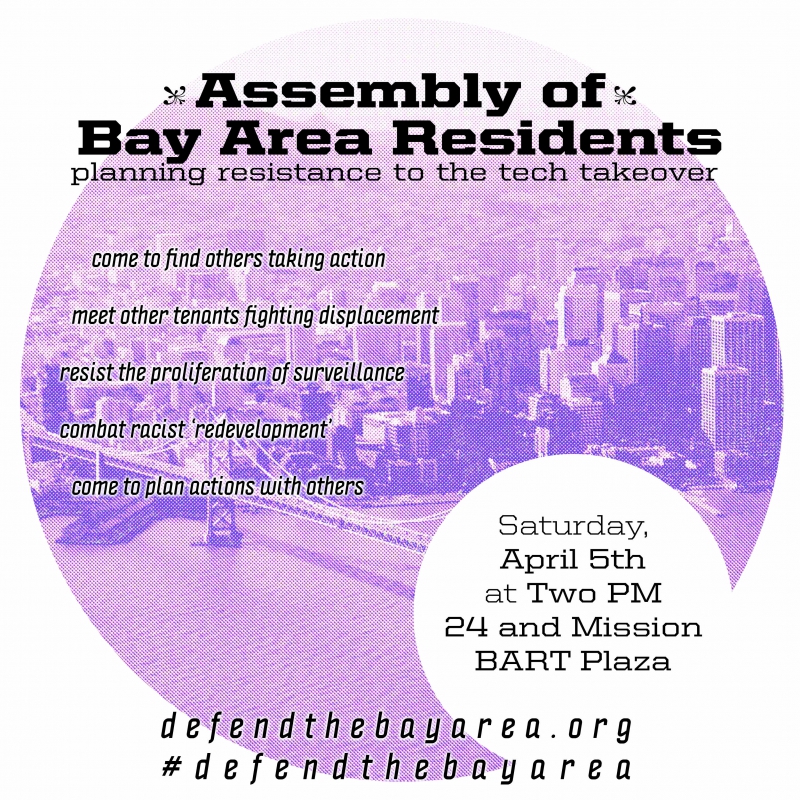 original image (3301x3301)
END_OF_DOCUMENT_TOKEN_TO_BE_REPLACED
Add Your Comments
Latest Comments
Listed below are the latest comments about this post.
These comments are submitted anonymously by website visitors.
TITLE
AUTHOR
DATE
Don't sidestep with false arguments...
California Freedom
Repsonse to "listen to google troll"
Marc
listen google troll
you need to do some rethinking
This campaign needs rethinking
Marc
Google troll
google bus
Dont get this
Rahula Z
Really?
VNTNA
This might be a good first step...
Harry
..,,.
,
Support Independent Media
We are 100% volunteer and depend on your participation to sustain our efforts!