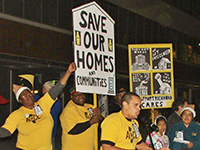 The City of Richmond, California voted to continue its groundbreaking effort to save resident homeowners from foreclosure on December 17, 2013. The Richmond City Council voted 4 to 2 in favor of moving forward with its plan to use its right of eminent domain to protect homeowners and to "prioritize those neighborhoods that have been particularly hard hit by the housing crisis." More than half of homeowner mortgages in Richmond are said to be underwater.

Opponents of the plan seek to block its implementation by relying on the city's charter, which requires a super-majority to invoke eminent domain. The Council is currently divided, with four members supporting Mayor Gayle McLaughlin's plan and three opposing, which is short of a super-majority. Banks and realtors oppose the concept, saying it is unconstitutional and would drive up lending costs in the city.