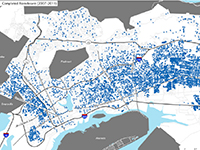 Looking for Answers and Fighting Gentrification in Oakland
Evict This! The Landscape, History and the Battle Against Evictions in West Oakland

Gentrification is a growing issue in neighborhoods across the Bay Area. Many areas in San Francisco, Oakland, and other cities look completely different now than even ten years ago, and the process appears to be accelerating. Economic and political forces set the stage for large numbers of new residents to migrate to areas where long-time residents have fallen victim to evictions, foreclosures, and the rising cost of living.

The East Bay Solidarity Network is a community group made up of volunteers living mostly in West Oakland who believe gentrification is a deliberate, engineered process that benefits only a few and hurts many. They’ve spent months base-building in West Oakland by hosting monthly tenants’ rights meetings, door knocking to neighbors, and flyering around liquor stores, laundromats and dollar stores, in addition to organizing neighborhood BBQ’s. "East Bay Sol" has produced a 79-page pamphlet entitled Evict This! The Landscape, History and the Battle Against Evictions in West Oakland which breaks down the history of displacement in Oakland and the resources available to fight the ongoing gentrification. Evict This! chapters include: You Are Not Alone, How Did We Get Here, Legal Resources, and Fighting Back.

Evict This! The Landscape, History and the Battle Against Evictions in West Oakland (5mb PDF) | East Bay Solidarity Network