Add an Event
Newswire
Calendar
Features
Home
Donate
From the Open-Publishing Calendar
From the Open-Publishing Newswire
Indybay Feature
Publish to Newswire
Add an Event
Related Categories: East Bay | Global Justice & Anti-Capitalism | Government & Elections | Health, Housing & Public Services
Evict This! The Landscape, History and the Battle Against Evictions in West Oakland
by Advance the Struggle
Tuesday Dec 3rd, 2013 3:14 PM
Advance the Struggle hopes to write a longer, more researched piece on gentrification in the upcoming months but would first like to showcase some of the work organizers have been doing. Here is the East Bay Solidarity Network’s zine. 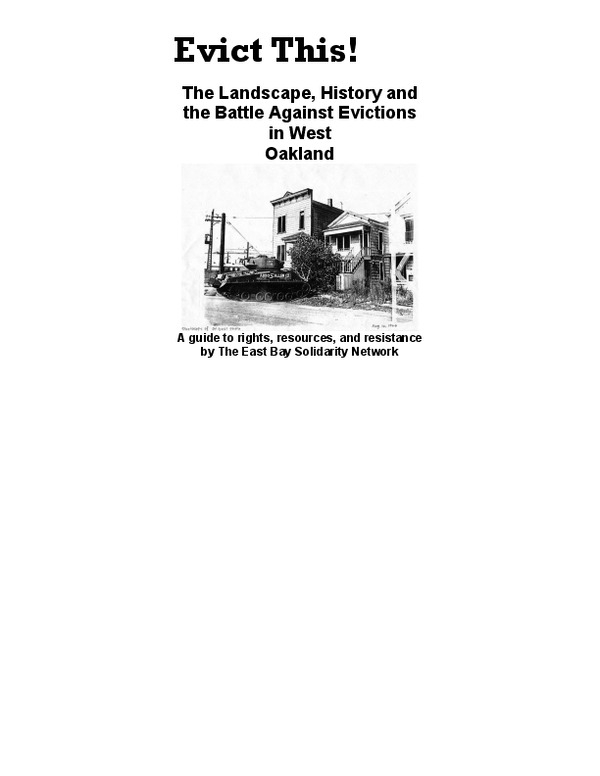 Download PDF (5.2MB)
Everyone on the left recognizes gentrification is happening. Its political, economic and social implications are far-reaching, with the state aiding and abetting the process. Neighborhoods in L.A., San Francisco and Oakland look completely different now than even ten years ago. In a gentrifying neighborhood residents feel the effects with ‘in-your-face’ style evictions and/or foreclosure notices. These have become an almost daily occurrence for struggling families. Many are forced to find ways to cope or resist the shifting nature of their neighborhoods; while those conscious of it, and even active in confronting the major players driving it (banks, real estate companies and big developers), recognize they also play a role in it. Considering this, how does the left get a full understanding of how and why gentrification happens? And then, how do organizers bring up conversations with our neighbors that will lead to constructive dialogue and a collective fighting strategy?

The East Bay Solidarity Network, based in West Oakland, focuses primarily on direct-action eviction defense. As a group of radicals, they seek to develop a deeper understanding of the history, process and results of gentrification before embarking on an eviction defense project. They’ve spent months base-building in West Oakland by: hosting monthly tenants’ rights meetings, door knocking to neighbors, flyering around liquor stores, laundromats and dollar stores, in addition to organizing neighborhood BBQ’s.

Acknowledging that there is more to learn — they wrote a small pamphlet, passed it out to neighbors, and sought to gather as much feedback as possible. The pamphlet, or zine, was a compilation of knowledge about gentrification learned through research, conversations, outreach and organizing; and an attempt to answer questions about the foreclosure crisis that re-ignited the gentrification in West Oakland. It explains how a national wave of foreclosures specifically affected this neighborhood, then goes on to highlight a history of West Oakland residents fighting back against federal, state and city policies. Policies which have resulted in the targeted displacement of Black residents since they arrived in the post-WWI boom years. It emphasizes that losing a house is not the fault of the individual, but instead a systematic approach by banks and big real estate companies to kick out long-term residents and drive up property values.

This is one strategy the East Bay Solidarity Network utilized to answer some of the most important questions to better understand gentrification; and was the medium used to talk to neighbors about how to fight back against a capitalist system that would rather — see their family-home empty with a ‘For Sale’ sign in the front — than with current and past generations living inside.

Advance the Struggle hopes to write a longer, more researched piece on gentrification in the upcoming months but would first like to showcase some of the work organizers have been doing. Here is the East Bay Solidarity Network’s zine.
http://advancethestruggle.wordpress.com/20...
Add Your Comments
LATEST COMMENTS ABOUT THIS ARTICLE
Listed below are the latest comments about this post.
These comments are submitted anonymously by website visitors.