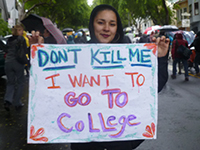 In recent years, the Bernal Heights neighborhood has undergone a wave of gentrification, and many Latino families have been priced out. Many longstanding residents complain of police harassment and racial profiling as a result of the demographic shift towards a higher-income, mainly white population that is buying homes now priced at one million dollars and more.

On March 21, 28-year-old Latino Alejandro Nieto was in Bernal Hill Park, before leaving for his night job as a security guard. The job required that Nieto carry a Taser. While more details are yet to be known, a jogger who reportedly called the police told 911, “A Latin male in a bright red jacket is pacing near a fence” and later, “the 'suspect' was now eating sunflower seeds while resting his hand on the weapon.” At 7:30 when the police arrived, it was still light out. They shot Nieto 14 times, killing him instantly. The SFPD claims they warned him to put his “weapon” down, but a neighbor witness says the police said nothing to him before shooting him.

That same night, an FTP march protested through neighborhood streets. On March 24, Nieto's friends and family gathered at the park for a vigil. On March 26, a town hall meeting was held by SFPD to defend the killing of Nieto and try to quell the community’s anger. They didn’t expect the massive outpouring and protests by the community. A major struggle has erupted in San Francisco demanding justice after Alex Nieto was gunned down by police. On March 29, hundreds of people marched in the Mission and to the top of Bernal Hill to protest the murder by police of CCSF student Alejandro Nieto.

Hundreds In SF Protest Murder of Alejandro Nieto on March 29, 2014 |

Defend our Homes From Evictions, Defend our Lives From Police Terror (PDF) |

Justice for Alex Nieto: No sane person would point a taser at the SFPD, says John Burris