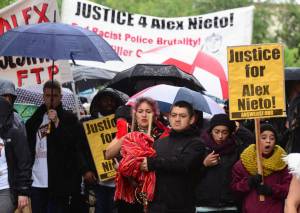 At about 7:30 pm on March 21, Nieto, 28 years old, was in Bernal Hill Park, before leaving for his night job as a security guard. The job required that Nieto carry a Taser. Bernal Hill Park has a panoramic view of the city and is the neighborhood where Nieto grew up. In recent years, the Bernal Heights neighborhood has undergone a wave of gentrification, and many Latino families have been priced out. Many longstanding residents complain of police harassment and racial profiling as a result of the demographic shift towards a higher-income, mainly white population that is buying homes now priced at one million dollars and more.

While more details are yet to be known, a jogger reportedly called the police told 911, “A Latin male in a bright red jacket is pacing near a fence” and later, “the 'suspect' was now eating sunflower seeds while resting his hand on the weapon.” At 7:30 when the police arrived it was still light out. Three cops came and surrounded him in a triangle formation in order not to hit each other. They shot Nieto 14 times killing him instantly. The SFPD claims they warned him to put his “weapon” down, but a neighbor witness says the police said nothing to him before shooting him.

It took 18 hours before the police called Nieto’s family to inform them of his death. To date the police have refused to release his body to the family. Renowned civil rights attorney John Burris, with long experience representing families of police-violence victims, has been retained.

On March 24, Nieto's friends and family gathered at the park for a vigil. Benjamin Bac Sierra, one of Nieto's childhood friends, noted, “We grew up in this neighborhood. We would have our keggers in this park and we would howl, man. And nobody thought it was strange. Nobody got scared. People said hello.” That was before the gentrification that is massively changing San Francisco’s working-class neighborhoods.

The cop killing of Nieto has sent shock waves through the Mission and Bernal neighborhoods.

On March 26, a town hall meeting was held by SFPD at Leonard R. Flynn Elementary School, to defend the killing of Nieto and try to quell the community’s anger. They didn’t expect the massive outpouring and protests by the community.

Nieto's family and close friends sat in front, wearing t-shirts that read "RIP Alex." Nieto's father Refugio told of being called by the SFPD the day after Alex's death and interrogated about his son, as if he were being investigated for a crime, instead of being their victim. Only after many questions, was the family informed he was dead. The cops then drove off with Alex's car, claiming it as evidence for their "investigation." They demanded to search Alex’s room but his father refused them permission. Refugio demanded to see his son's body, to have his son's property returned to him, for a medical report on Alex's death and an independent investigation into the killing.

At the town hall meeting, the crowd, overwhelmingly Bernal and Mission residents and majority Latino and Black, swelled to over 500. As police chief Greg Suhr attempted to justify the shooting, members of the crowd shouted "Liar!" and "Murderer!" Suhr presented photos of Nieto's stun gun next to a picture of a real gun, claiming it would be impossible to tell the difference between them. But Nieto’s tazer, which he was licensed to carry, had a large yellow stripe down the side to differentiate it from a real gun.

Nieto’s friends commented on his gentle nature, his Buddhist beliefs, that there was no way Nieto posed a threat to anyone, and that the racist profiling of a Latino man as dangerous is what prompted the police to murder him.

Dozens of people spoke out on the open mike, among them activists of ANSWER Coalition, who supported the call for a march the following Saturday. Among the demands are criminal indictment of the police for Nieto’s murder and an independent investigation.

On March 29, hundreds of people carried signs and banners demanding Justice for Alex Nieto. They marched from the center of the Mission district, along historic 24th Street, and up Bernal hill to the site where Nieto fell in the hail of police bullets. A moving ceremony with Azteca dancers circled by supporters, with Alex Nieto’s father and friends, gave tribute to the young man whose reputation of generously helping others was noted by Bac Sierra, leader of the new coalition that bears Alex’s name.

A Facebook page has been established to spread the word and build the struggle for justice for Alex Nieto:
https://www.facebook.com/groups/721427181211650/ 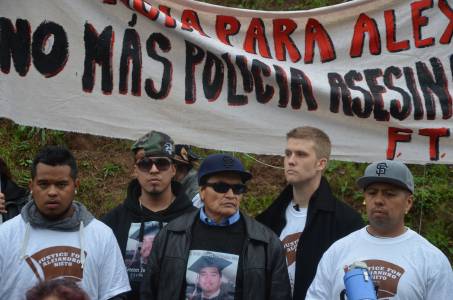 Photo: Gloria La Riva
Add Your Comments
Support Independent Media
We are 100% volunteer and depend on your participation to sustain our efforts!