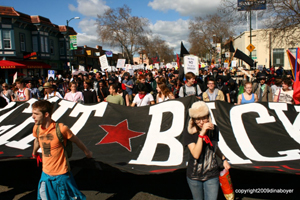 May 4th Update: Dozens of March 4th arrestees sentenced to time served; Next court date May 11th 9am March 5th Update: One hundred and fifty-seven I-880 arrestees were taken to Glenn Dyer jail in Oakland and Santa Rita jail in Dublin, an Indybay reporter amongst them. Most were charged with unlawful assembly and obstruction of a public place (misdemeanors). At least two at Oakland and one at Santa Rita were held on bail, charges being resisting arrest and or assault. All have been released by now. Arraignments for I-880 arrestees are set for April 2nd and April 5th. A local high school student, Francois Zimany, is recovering from a 25-30 foot fall off of I-880.


March 4th: Across California, students and educational workers rose up against budget cuts, layoffs, fee hikes, and the system that prioritizes war and prisons over schools. In Berkeley, students blocked gates to UCB, rallied, and marched to downtown Oakland. In Oakland, hundreds of K-12 students walked out and protested on Telegraph Avenue. Laney College students marched to the main rally at Oakland City Hall. After the rally in Frank Ogawa plaza, 150-200 people walked onto southbound I-880 in Oakland. About an equal number of police mass-arrested most of those on the freeway. An Indybay reporter was arrested with 155 others and taken to Oakland City jail and Santa Rita jail overnight. One person was taken to the hospital after either falling, jumping, or being pushed by police off of the freeway. In San Francisco, SF State students, faculty, and supporters, in an event sponsored by the California Faculity association, rallied and briefly blocked 19th Street. SF City College students rallied and rapped. Later, thousands from schools across SF marched and rallied at the Civic Center along with several labor groups. In Concord, students at Diablo Valley College rallied and marched. In Vallejo at the California Maritime Academy, employees, faculty, and students rallied against budget cuts. In Santa Cruz, students, faculty, and workers gathered at 5 am to shut down UCSC by blocking the two main gates, followed by rallies and a general assembly. In Aptos, hundred rallied at Cabrillo College. In Watsonville, parents, students, and community partners held a rally in the Watsonville plaza. In Monterey, CSU-Monterey students rallied against budget cuts, inaction, and the destruction of the higher education system. In Davis, police used pepper balls, batons, and tasers on UC Davis students as they attempted to block I-80. In Sacramento, thousands rallied in front of the Capital building to protest politicians selling education short in California. In Stockton, students, teachers, and workers march against cuts on education. In Fresno, students, faculty, and supporters marched to CSU-Fresno where they were joined by hundreds of more students who walked out of classes and joined the rally. Following the rally, dozens of students marched to the administration building and engaged in a sit-in until they left of their own accord late in the evening. In Los Angeles, 300 students occupied UCLA's Murphy Hall while thousands of others marched and rallied. More student and education worker actions took place across the U.S.

Audio
Breaking News from I-880 Action | Protesters being arrested on the freeway | DROP THE CHARGES Against the March 4th Protesters! | I-880 Legal Update | Update on student who fell from I-880 highway overpass | An Analysis of I-880 Direct Action | Rebuttal to “Why Did the March onto the 980 Freeway Happen” | Raider Nation Collective Statement on the M4 Highway Takeover | Feeling Froggy? Dicking around at Santa Rita | Letter re: March 4 protest from President of the Oakland Education Association | The Dawn of the Crisis Generation | Real Risks. Real Community | Addendum to My Original Rebuttal...by Melissa Merin | Open letter to M4 action critics

Audio
Notes On March Fourth And The Invisible College

March 13th: SF Assembly Meeting "What Next After March 4"

See Also: What's March 4 Looking Like So Far? | The Fight to Save Public Education | How Not to Complain About March 4 | The Way Forward for the Movement in Defense of Public Education

Statement from the Nielson 5; Students do non-violent study in for higher education access


Last Week of February: banners were dropped from buildings at CSU Fullerton, SF State and UC Santa Cruz, while students occupied a building at UC Irvine over budget cuts and held sit-ins in UC San Diego ( 1 | 2 ) and UCLA against racist policies.


February 25th: a dance party of hundreds taking place on Sproul Plaza at UC Berkeley turned into an occupation as party-goers took over the construction site of Durant Hall. After taking over the building and causing some amount of property damage, participants took the party onto the streets. The crowd moved down Telegraph Ave., pulling objects into the street to prevent police movement while smashing a window out of a Subway. For more than an hour the party swelled in numbers while dancing around a burning dumpster and throwing projectiles at police who tried to move in. Two people were arrested on felony charges and face arraignment March 1st.


In anticipation of the statewide strike and day of action on March 4th, activists have stepped up their actions with a renewed round of occupations in California. In the East Bay, strikes and walkouts are planned to converge in downtown Oakland and an evening rally is planned for San Francisco. Other actions are planned at universities, colleges, and high schools across the state.

"After the Fall: Communiques from Occupied California" Full PDF