by sara (sarars2 [at] gmail.com)
Students, faculty, and workers gathered at 5 am at UC Santa Cruz to protest the privatization of public education in California. The students called a strike, and campus is shut down, with traffic prevented from going up to campus. As of 7 am, hundreds of students, faculty and workers have gathered at all campus entrances. Thousands more are expected throughout the day, especially for the 9 am and noon rallies, and the 5 pm general assembly, all at the base of campus at mission and bay.
Uc santa cruz is shut down.
§Banana Slugs shut down the campus.
by photo 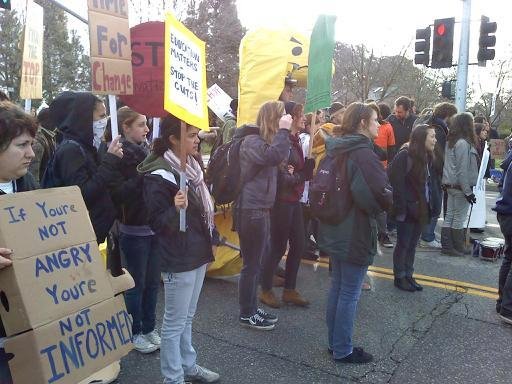 §Update
by via Occupy California 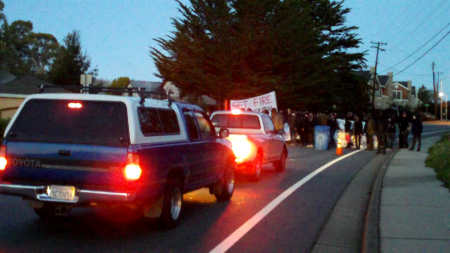 9:40am: Currently a rally is being held at the main entrance (i.e. the east entrance) with 250 participants. For a while 2 helicopters were flying above. The students blocking the intersection of High and Western have left after most of the workers were blocked from entering campus (it would appear some dining hall workers were able to get on campus, but many others were unable to get on campus). Many of the workers are now here supporting the students.

Earlier this morning, multiple students were injured by two separate incidents where cars rushed the strike line (one at the intersection of Hagar and Coolidge, and the second at the intersection of High and Western). The car at Hagar and Coolidge was tailgating a police car being let through, students then approached the vehicle to stand in front of it and tell them about the strike. The car hit the gas and drove into the mass, injuring a student’s leg, fortunately not broken. In the incident at High and Western, a tan volvo began accelerating into the crowd blocking the street, despite the fact that cars driving down High (away from campus) were being slowly let through. The volvo hit around 5 students, one student flipped over the hood of the car and over the top, breaking the rear window as the student fell off the back. As the volvo sped away, students kicked the car, denting it. Several cars and motorcycles have tried to slowly push through the crowd through out the day, but all failed. Rumors of other car incidents exist, but the others have yet to be confirmed.

Also, earlier this morning a banner was hung over highway 1, stating “March 4 Defend Education!”
END_OF_DOCUMENT_TOKEN_TO_BE_REPLACED
§democratize-regents
by via Bleiddwn 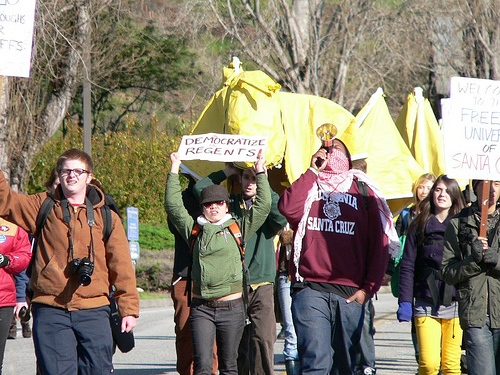 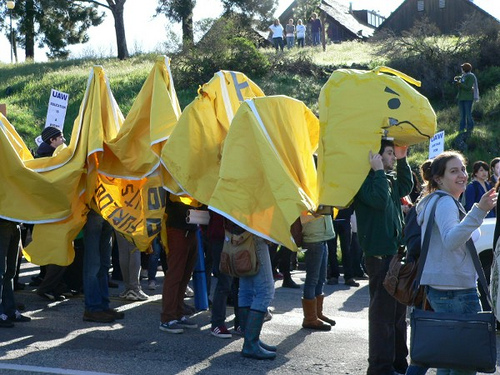 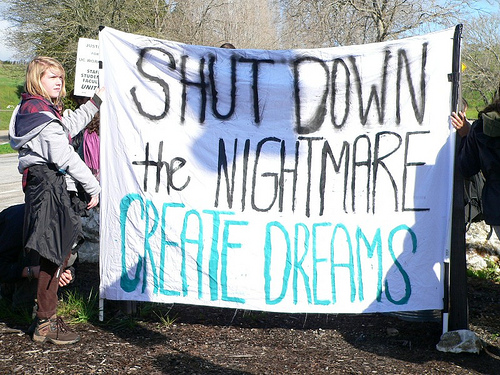 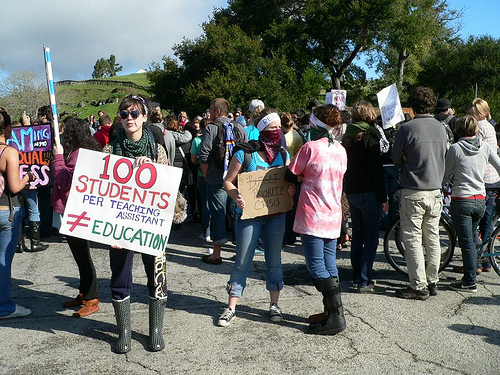 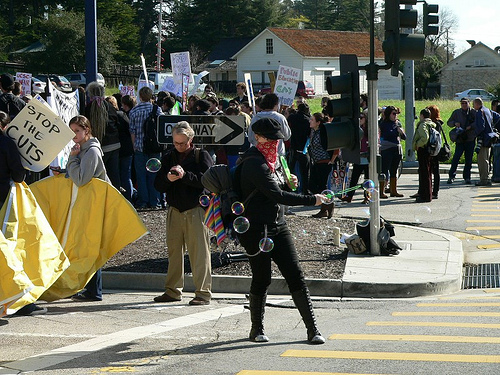 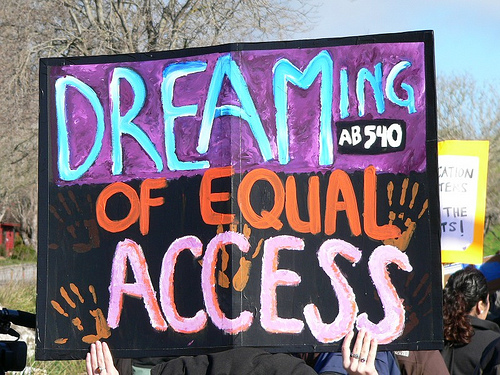 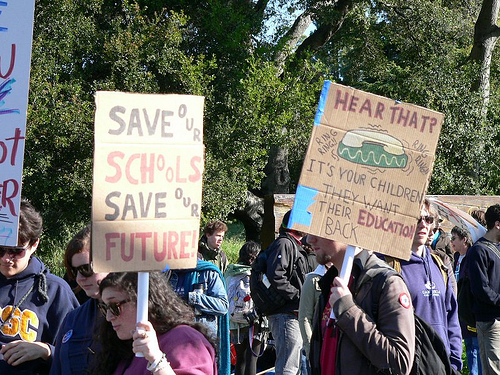 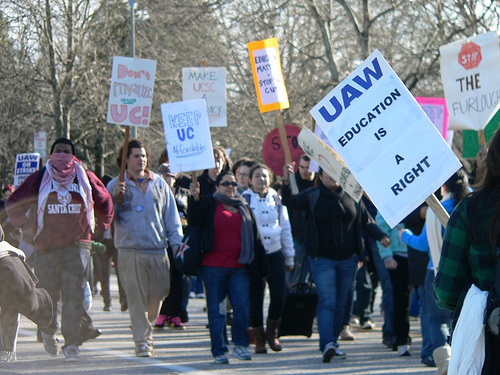 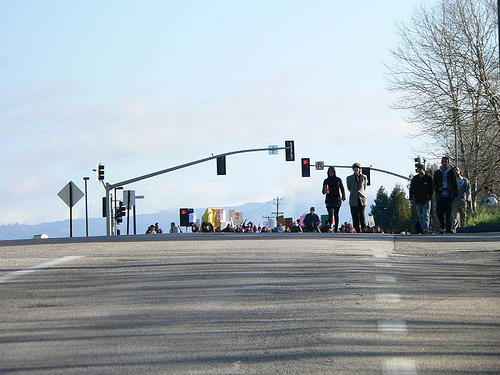 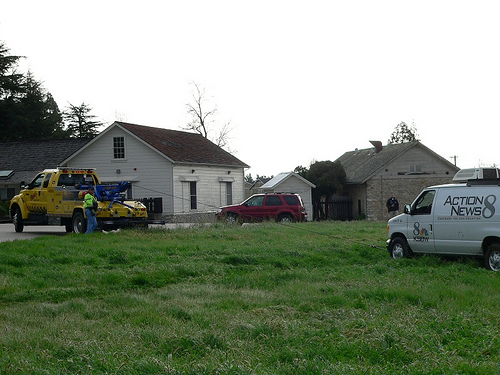 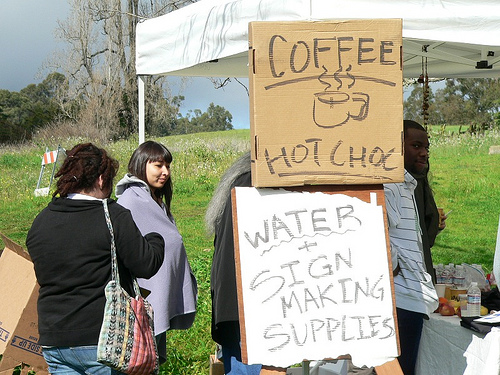 §11:40am Update
by via Occupy California
11:40am: While most of the protesters are at the main entrance and the west entrance, some of the protesters are at Hagar and Coolidge to watch out for supervisors forcing workers to trek up the long and steep hill to get to work. Supervisors began leading the workers up the hill past a handful of students in the intersection before the students could organize themselves. As more students came to support the other students in the intersection, they realized the workers and supervisors were already around 50 feet away up the hill to campus. So around 15 students ran up the hill to form a line to blockade the workers. The police arrived and dispersed the line, telling the students that they had made a “physical threat” on the workers. As the workers passed by, they shouted that there was no physical threat. So as the police returned to their vehicle, the students yet again ran up the hill the block the workers from getting further into campus. The police immediately turned around and approached the students to disperse them. However by now, the workers turned around and spoke to their supervisors claiming they couldn’t get through, the supervisors conceded and the workers were allowed to go home
END_OF_DOCUMENT_TOKEN_TO_BE_REPLACED
§1pm Update
by via Occupy California
Copy the code below to embed this movie into a web page:
Download Video (4.2MB) | Embed Video
1:00pm: Around 500 have rallied at the base of campus. Video was taken around 12:45pm, the rally as of 1:15pm is still going.
Add Your Comments
Latest Comments
Listed below are the latest comments about this post.
These comments are submitted anonymously by website visitors.
TITLE
AUTHOR
DATE
Not true
Mee too
I was there...
Miles
Let's break it down further
Not adding up
that photo
morning student
And the guy running towards the car?
His face hidden?
The volvo is running people over?
Recreate history much?
volvo photo
(a)
think twice before you try to run someone over
(a)
Car assaults
morning student
My point is disinformation, by either side, is a crappy practice
Keep it Real
Support Independent Media
We are 100% volunteer and depend on your participation to sustain our efforts!