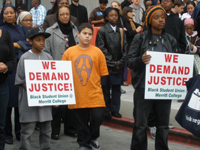 On Friday, January 1st, 2010, two events took place in Oakland to commemorate the murder of Oscar Grant by BART police on New Year's Day 2009. The first was a vigil at the Fruitvale BART station organized by Oscar Grant's family, where a political and multi-faith group spoke in the memory of Oscar and for a future of hope, justice and action. In the evening, the community gathered at the Humanist Hall in Oakland for an artistic and cultural night dedicated to networking and education. Many poets, artists, activists, allies and family gathered. Initially, the Oakland Police tried to stop this event due to lack of a permit. Although it was scheduled on private property, the OPD insisted it was a "special circumstance" event and needed a permit. In the end, the movement-building event went on.

In Los Angeles, community activists made a strong presence inside and outside of the court house on January 8th. It was the first hearing for Johannes Mehserle since his murder trial was moved out of Alameda County.