Add an Event
Newswire
Calendar
Features
Home
Donate
From the Open-Publishing Calendar
From the Open-Publishing Newswire
Indybay Feature
Publish to Newswire
Add an Event
Related Categories: East Bay | Police State & Prisons | Racial Justice
BART Committee on Police Violence Caught on Camera, Hiring Police Chief, & New Year's Eve, 11/25/09: audio & PDFs
by dave id
Saturday Nov 28th, 2009 12:16 PM
BART's Police Department Review Committee met as planned to continue their discussion on the hiring a new Police Chief and plans for this coming New Year's Eve. The committee, which was created to deal with the aftermath of the murder of Oscar Grant by BART officer Johannes Mehserle caught on video on January 1st, 2009, had to add an extra item to the agenda: yet another incidence of BART police violence caught on camera, this time at the West Oakland BART station on Saturday, November 21st. 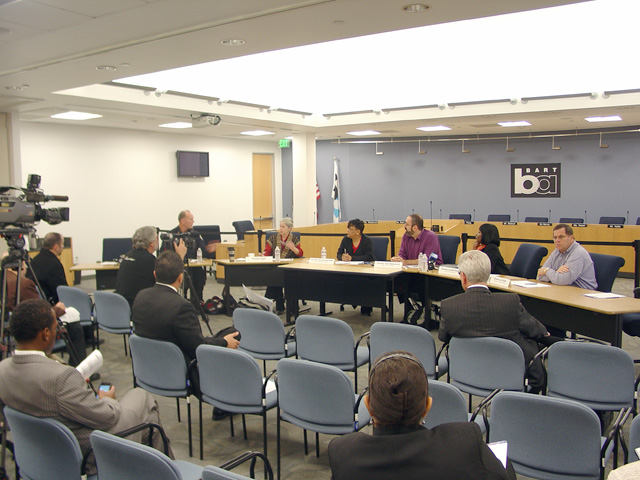 
BART had already hastily called a press conference on Sunday to get out in front of the story of the unnamed BART officer who shoved a passenger into a glass and concrete wall on the West Oakland BART platform, causing the glass to shatter, injuring both himself and the passenger. The Police Department Review Committee still thought it necessary to bring in acting BART Police Chief Dan Hartwig to further address the issue. This was probably in anticipation of the presence of the corporate media who indeed showed up for the first time ever at a police review committee meeting (yet as of this writing not a single corporate news outlet seems to have seen fit to report on it).

Not surprisingly, Commander Hartwig's response reveals that he has fully taken on the role as chief apologist for BART police brutality. While he assured everyone in attendance that supervisors have been working "around the clock" to gather facts related to the incident, out of the other side of his mouth Hartwig offers the same old, tired rationalizations for police violence such as the "split-second" decisions officers must make to supposedly ensure public safety (never mind that there were no split-second, life or death decisions required in West Oakland on the 21st). Presumably, Hartwig also approved of the passenger being charged with two felonies, one being battery of a police officer, which the video evidence clearly shows not to be the case as the officer pushes the passenger into the window. Why the officer decided to single-handedly get physical with the passenger with no other officers present is not addressed.

Directors of the BART Board on the committee largely focus their questions to Hartwig and general discussion on the seeming ease with which the glass broke and building codes of the past and present, especially considering that this is earthquake country. Director Joel Keller asks about what information will be released to the public on the results of the internal investigation, and the answer is basically none unless supervisors find that information to be exculpatory toward the officer's use of force. Director Lynette Sweet questions how and why the original felony charges were reduced to misdemeanors by the Alameda County District Attorney's office, although as of Wednesday, November 25th, the passenger remained incarcerated in the Santa Rita jail.

At twenty-two minutes into the meeting, public comment and media questions are solicited. The single community activist attending the meeting (yours truly) calls into question Director Tom Radulovich's earlier assertion that the police response to new incident is "night and day" regarding information made available to the public compared with the response after the murder of Oscar Grant. Just as before, though, the public has received only promises of a thorough investigation (that the public will never see the results of) and rationalizations for the officer's behavior. BART obviously held the press conference just because the use of force was once again caught on video; Director Sweet revealed in August that an African American man was handcuffed then tasered by BART police yet there was no press conference called then. Additionally, all of the supposed increased police training hours that BART has been trumpeting their officers are receiving do not appear to be yielding results, as the passenger that was slammed into the window was showing signs of being mentally unstable yet the officer immediately put his hands on the man without even giving him any verbal direction. Commander Hartwig interrupts the public comment repeatedly to defend the officer. He states that it was not known until after the event that the man had mental health issues, but it is simple common sense, especially to anyone with mental health training, that a passenger walking up and down a train car yelling obnoxiously at other passengers probably has mental health issues. True to police brutality apologist form, Hartwig tries to refute questions about the officer's judgement by using the most ridiculous and self-justifying ad hominem, "You have not walked in the shoes of a police officer." In short, the same spin and rationalizations are coming from BART police as they always have. They encourage the public to reserve judgment about a police action while an internal investigation is conducted, yet they actively defend their officers in the meantime, hoping the public will just forget and not notice that results of the investigation are never released. If the Directors of the Board continue to accept this modus operandi, and allow General Manager Dorothy Dugger to continue to oversee such dysfunctional, things will never substantially change within the BART police department.

Director Sweet asks if the officer's probationary status as a recent transfer from the Alameda County Sheriff's department will effect any discipline he could potentially receive, and Hartwig answers merely that it is a factor that will be considered.

Director Keller closes the first agenda item with claims that the public is in support of the officer's actions, noting the cheers that are heard on the video when the officer first confronts the passenger. He seems to not understand that people cheer at all kinds of messed up things, and that cheering on trains is certainly not what BART police policies should be based on. Police are supposed to be professionals trained in dealing with mental health issues that the common person may not be. Furthermore, the cheers came when other passengers saw that an unruly passenger was initially being led off of the train, however improperly -- no one was cheering when the officer slammed the man and himself into the window.

The corporate media, Hartwig, and off-duty BART officers in attendance left the meeting when discussion of the West Oakland incident ended.

Dorothy Dugger then introduces the agenda item related to the search for a new BART Chief of Police, given the impending vacation of the position by the infamously inept and corrupt Gary Gee. Dugger says that there will be a public survey to solicit feedback regarding the selection (draft PDF below). Bob Murray of Bob Murray and Associates, an outside contractor who is managing the selection of a new chief, reported on the timeline and other aspects of the hiring process. The names of candidates will be kept confidential. A panel made up of chiefs from other departments and BART police supervisors will winnow the list down to perhaps a half dozen. Finalists will be subjected to a psych evaluation and background checks. The selection of the chief will be Dorothy Dugger's to make.

Director Sweet notes that the committee has not been involved in the process yet has a vested interest with four Board members whom have comitted themselves to BART police issues. Directors Carole Ward Allen and Radulovich agree that the committee needs to be consulted. Keller disagrees and prefers to leave the decisions entirely up to General Manager Dorothy Dugger. Keller says his experience as Mayor of Antioch led him to believe elected officials should not be involved. Sweet says she does not want to go back into the box of being kept in the dark like before the murder of Oscar Grant. Radulovich adds that the current system of just trusting the General Manager is not working as he holds up a copy of the NOBLE report that blasted the entire BART police department.

At about one hour and nineteen minutes into the meeting, public comment on agenda item #2 is sought. The committee is told that is Dorothy Dugger should not be trusted with making the decision of who should be the next chief of police. She has been privy to information not accessible to the committee or the full Board, yet she is allowing current Chief Gee to retire with full benefits despite all of the horrendous publicly-known issues with BART police under his supervision. She is a part of the problem and should be fired herself.

Defending her hiring authority, Dorothy Dugger claims to believe in "sharing the vision" with Board members and the public but warns against blurring all hiring decisions in the agency by involving the Board in selection of a new chief. Director Radulovich later confronts Dugger on the lack of confidence in her judgment and objects to her comment that more or less told the Board to "butt out."

The final agenda item for this meeting was continuing the discussion on plans for the coming New Year's Eve. There will be public outreach including radio, Spanish-language announcements, and video on BART TV that will push the three main themes BART wants to project about the night: avoiding peak times (i.e. right after midnight), reminding riders about rules regarding drinking and smoking, and promoting a family-friendly environment. BART has been reaching out to merchant groups near stations and they are not interested in involvement with sobriety events or serving coffee late at night. Police are engaging clergy to ride with them on New Year's Eve. Instead of closing the Embarcadero station as was previously considered, BART will run some trains to and from Embarcadero only and others to and from the Montgomery station only. The Dublin and Fremont lines will stop at Embarcadero and lines from Richmond and Pittsburg/Bay Point will skip Embarcadero for the Montgomery station on New Year's Eve. This is intended to split up the huge numbers of riders that traditionally enter the BART system at Embarcadero after the midnight fireworks end in San Francisco.

There will be one more as-of-yet-unscheduled Police Department Review committee meeting before the end of this year.

At 2-6pm on January 1st, 2010, a memorial service requested by the family of Oscar Grant will be held outside of the Fruitvale BART station. 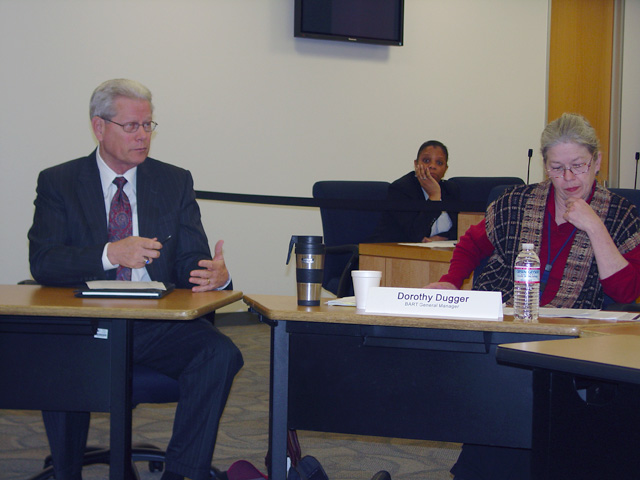 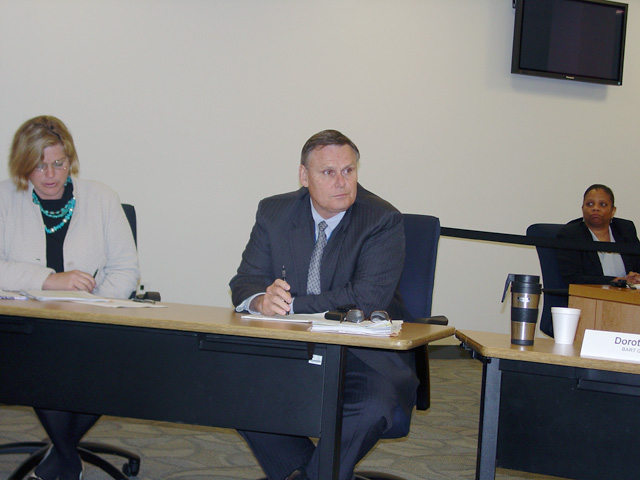 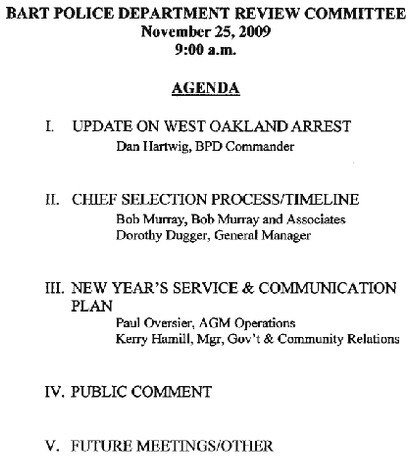 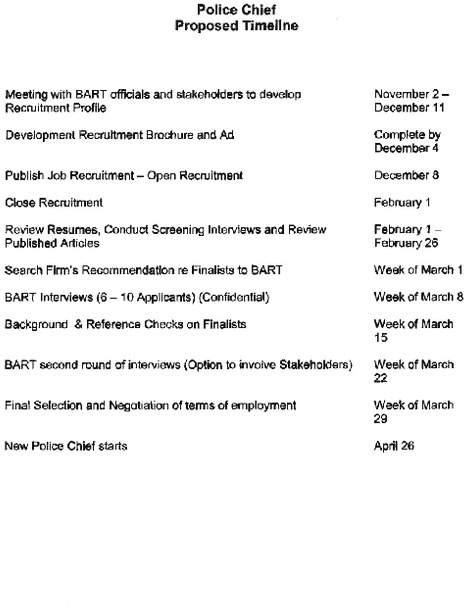 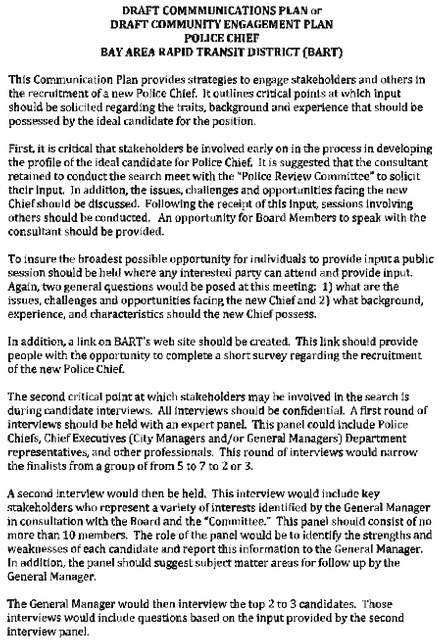 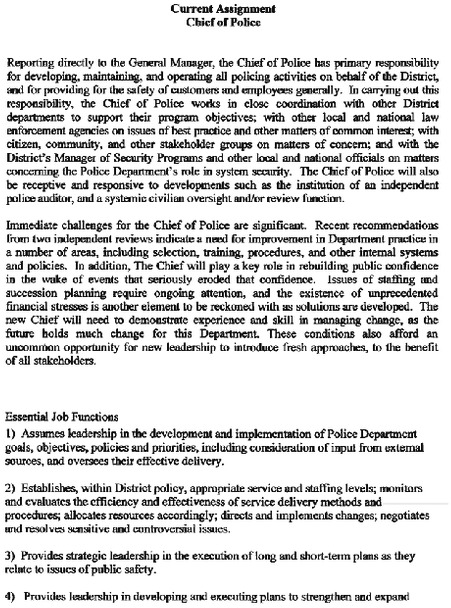 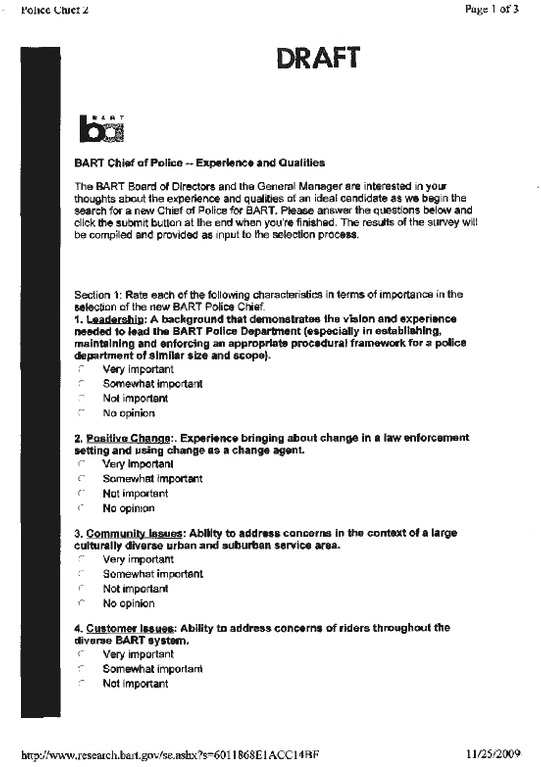 Online version of survey ran from 12/3/09 to 1/7/10 at http://www.bart.gov/news/articles/2009/news20091123.aspx
http://indybay.org/oscargrant
Add Your Comments
Support Independent Media
We are 100% volunteer and depend on your participation to sustain our efforts!